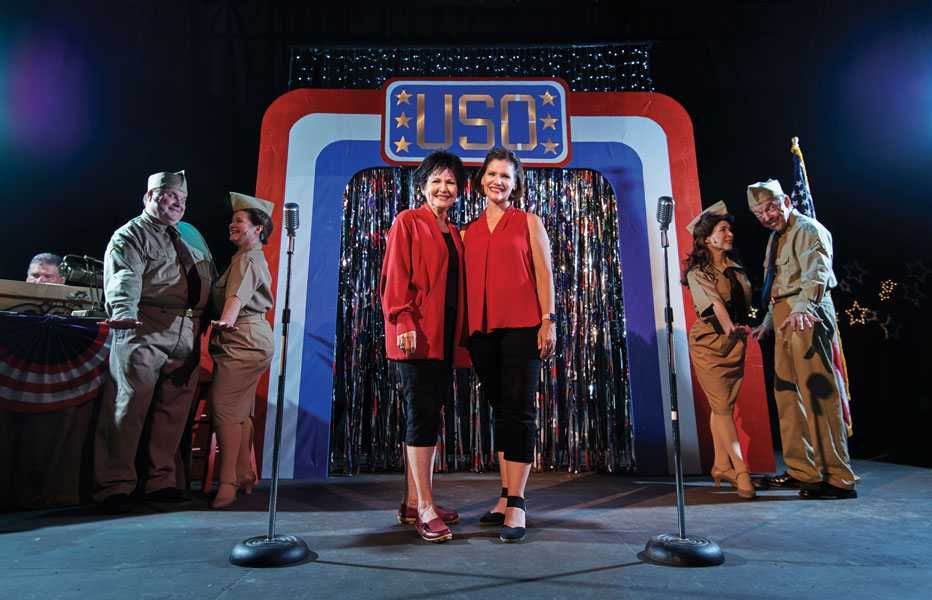 The story of Conklin Dinner Theatre

Conklin’s Dinner Theatre, a central Illinois fixture for almost 45 years, nearly saw its curtain come down one last time in 2015. A will to live has fueled its encore.

Known today as The Barn III, the dinner theater and event venue has roots in the Angus cattle industry in rural Goodfield. The story begins with Henry Mortimer Robinson, known locally as the “cattle king.” He owned more than 1,000 acres of Illinois farmland and grazeland for the cattle he brought to the area in the mid-19th century.

Construction of outbuildings and a brick farmhouse on his homestead began in 1857. Construction of the large round, dome-shaped cattle auction barn, which would eventually become Conklin’s Dinner Theatre, was completed in 1941. 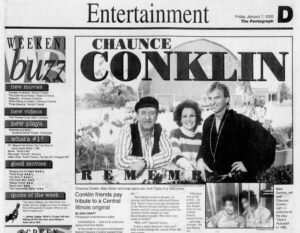 Chaunce Conklin taught theater at Illinois Wesleyan University in Bloomington. While auditioning for a Broadway production in New York City, he was struck with an idea. He wanted to open his own dinner theater.

Upon returning to central Illinois, he tried the concept in several locations before deciding the old Angus cattle auction barn would be the perfect location to realize his dream. In 1975, Conklin and his acting troupe made the barn their home.

Mary Simon, a theater major at Illinois State University, auditioned to perform at the dinner theater and eventually became Conklin’s business partner. Together, they transformed the old barn into a thriving business. The cattle show ring became the downstairs dining area with additional seating in the barn’s hayloft. It was said that “they put beef on the buffet line and hams on the stage.”

People came by the carload and busload to enjoy a delicious dinner, first-rate entertainment and plenty of laughter. During breaks in performances, actors filled other roles, such as waiting tables. Through this, they established a real connection with the audience, enhancing an already special experience.

In the early days, Conklin favored large, elaborate theater productions, some of which included television celebrities. Over time, the theater struggled to financially sustain them and began losing money. Conklin’s health began to falter, and Simon took over the business as owner and operator.

She scaled down the size of the troupe and began using only local talent. Under her watchful eye, the business flourished. Conklin passed away in 1999. Two years later, as a tribute to him, Simon renamed the revived business Conklin’s Barn II Dinner Theatre.

Just short of its 40th anniversary in 2015, the barn was severely damaged by a tornado. Though Simon used other facilities for limited-run theater productions, she could no longer make ends meet and decided to shut down the dinner theater. 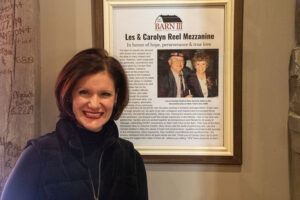 Enter Abby Reel. Reel grew up working with her dad on her family’s farm, the largest Angus cattle and cattle breeding operation in four counties. Her family’s connection to the dinner theater started before she was born.

When she was 5 years old, Reel’s parents took her to her first show at the dinner theater, and she loved it. As a teenager, she started bussing tables there and was soon waitressing. As a high school senior, she began acting in productions. Since she lived locally, even after high school, she was on the short list to be called if someone was unable to work.

Reel entered Illinois Wesleyan University on a theater scholarship, but followed a different path, ultimately becoming a career counselor, advisor and therapist at Illinois Wesleyan. Her work was gratifying, but the dinner theater had captured her heart.

“I saw there was something really powerful about the social connection that happened when people experience theater – whether it’s sitting together as a family or couple, or what’s happening between them and the stage and actors,” she explains.

She had recently lost her father to cancer when she learned of the theater’s closure. An entrepreneur like him, Reel realized this was a tremendous business opportunity for her and a way to honor his memory. She met Simon for lunch, shared some ideas for the business and made her an offer. She asked Simon to teach her all she knew about the business, and the deal was made. Simon continues to be integral to the business on and off stage. 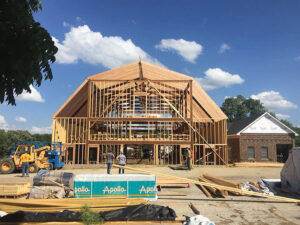 Construction of The Barn III began in August 2018 and was completed in January 2019.

Working on a major construction project for a local landmark would be daunting for anyone, but especially for a woman with a full-time job, a young child and a new baby. Reel took a deep breath and got to work. What remained of Barn II was demolished. It took a year-long $90,000 fundraising campaign, a small business (SBA) loan and a community barn raising to launch The Barn III.

There’s no mistaking the beef industry heritage in The Barn III. Timbers, bricks, metal and other parts salvaged from the original barn were incorporated into the new barn’s design. A black Angus sculpture welcomes guests at the entrance. The ladies’ charming restroom is designed in what could be referred to as “Angus chic.”

On New Year’s Eve 2018, the resurrected dinner theater opened in time for a donor event. Shows followed in February 2019 with the same winning format and actors who had been performing there for as long as 40 years. The theater brings some 200 cars to the community for every show. Reel says, “We are the place you go when you want to celebrate and be celebrated.”

Theater productions usually run Thursday-Saturday evenings from October through April. Tickets are $48 per person and include live entertainment, appetizers, salad, a buffet meal, desserts and non-alcoholic beverages. Alcohol is available for an additional cost.

Reel describes the food as mouthwatering, down-home cooking. “We have worked hard on building the same dinner theater menu as the old barn with some new and improved selections,” she explains. “Our full-time chef and dining manager have made The Barn III’s food something to Instagram about.” She raves about the fried chicken, prime rib, garlic mashed potatoes, pork tenderloin, raspberry salad dressing and the chef’s secret fettuccine sauce.

The Barn III is about more than just entertainment. With more than 57 employees, it plays a significant economic role in its small community. Reel says, “In addition to local employment, we’ve been able to offer internships to high school students and participate in local programs like Creating Entrepreneurial Opportunities (CEO), which focuses on growing entrepreneurship in Woodford County.” 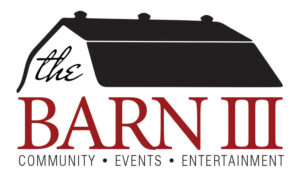 When a local baker found herself without a kitchen, renting the barn’s kitchen in off-hours was the perfect solution for her and enables the theater to have ready access to fresh-baked goods.

Food purchased from local vendors, water use, electric use through Corn Belt Energy Corporation and taxes also benefit the community. In the offseason, various local musicians are booked to play fundraising concerts. The proceeds are donated to local charities. “As a local farm girl, I’m proud to be back in my community again, contributing and giving back,” she says.

Reel is focusing on drawing a wider demographic audience. “Mothers and grandmothers who have been coming to the theater for years now have daughters and granddaughters who are in the wedding mode.” 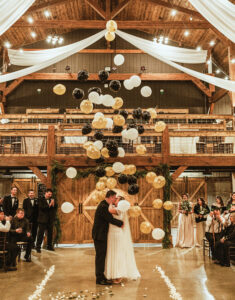 The Barn III has become a popular wedding venue. Kris and Sara Thomas, the facility’s chef and dining manager, married there in January 2020.

For 10 years previously, she ran a side wedding planning business and tapped into that experience to fill a void in the community. The Barn III is rented during its off-season for proms, weddings and community events. She is now seeing the fruits of her labor. Weddings are sold out for 2020, and space for 2021 is limited.

Other areas of the property are beginning to take shape. A vacant shed has been transformed into a dance studio and the theater’s set design workshop. There have also been hints about potential exciting additions, so stay tuned for the next act.

Chaunce Conklin’s original dream of bringing people together for dining and entertainment lives on in The Barn III. “The Barn is not just a business,” says Reel. “It’s a landmark – an institution. It has a spirit about it.”

Reel recalls something her father often said, “Some things just have the will to live.”