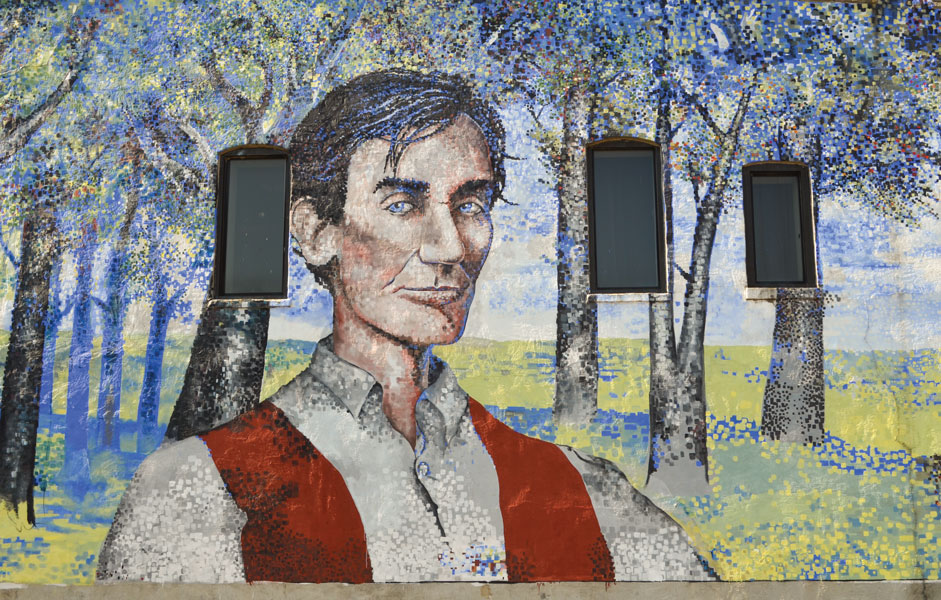 Larger-than-life cultural expressions can be found on the streets of many cities and small towns across Illinois. Murals are a source of pride and history in these communities, breathing life into the chronicles of their past. 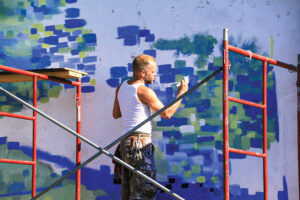 From Pittsfield to Pontiac, Marshall to Mt. Sterling, murals can be found everywhere. Take for instance Michael Mayosky’s 2,200-square-foot mural of Abraham Lincoln (Abe Lincoln Number 109, The Surveyor, 2013) in Springfield, which is comprised of 650,000 individual squares. Each represents the life of a soldier, North or South, who died during the Civil War. One of his many works featuring Lincoln, this one portrays the former President as a young man.

“I used Keim Paints. These paints are quite expensive and durable. The Romans invented them to last, and they do – sometimes thousands of years. They let water and moisture pass through without cracking or peeling the paint,” Mayosky says. “The Lincoln murals in Springfield will last hundreds of years, or at least as long as the building lasts, because I insisted these paints were used.” 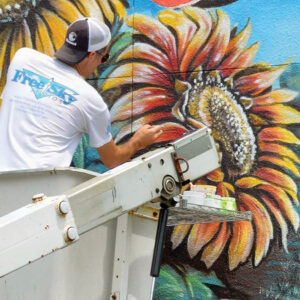 That mural is part of a series of public art that was proposed by Troy Freeman of FreeSky Studios. Through his web business, he became a part of Springfield’s business community. “[I] started getting involved in a lot of public and community service. Part of that was my desire and focus on public art (which Springfield was lacking). I was asked by the city to give a presentation on what and how I would envision bringing public art to Springfield.” He titled that proposal “The Artification of Springfield,” which led to a partnership with Downtown Springfield, Inc. and the mayor’s office to create an ongoing series of public art projects. Freeman says the project is still in place. 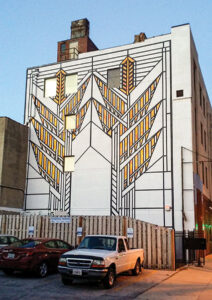 Freeman painted the second and third murals – the “Farmers Market” and “Frank Lloyd Wright Tribute,” respectively. He describes the former on his website: “From the vast blue Midwestern skies juxtaposed against the angular rows of fields to the vivid colors of the harvest, it is my hope that this mural stimulates the same love and admiration for the local farmer and our land that I have to everyone who views it.”

The Wright mural was a while in the making, due to the need to obtain permissions. Upon its completion, Freeman explains his intent. “The final product stands as a lasting homage to Wright and the strikingly beautiful sumac stained glass pieces he designed that can be seen in the Dana Thomas House.” 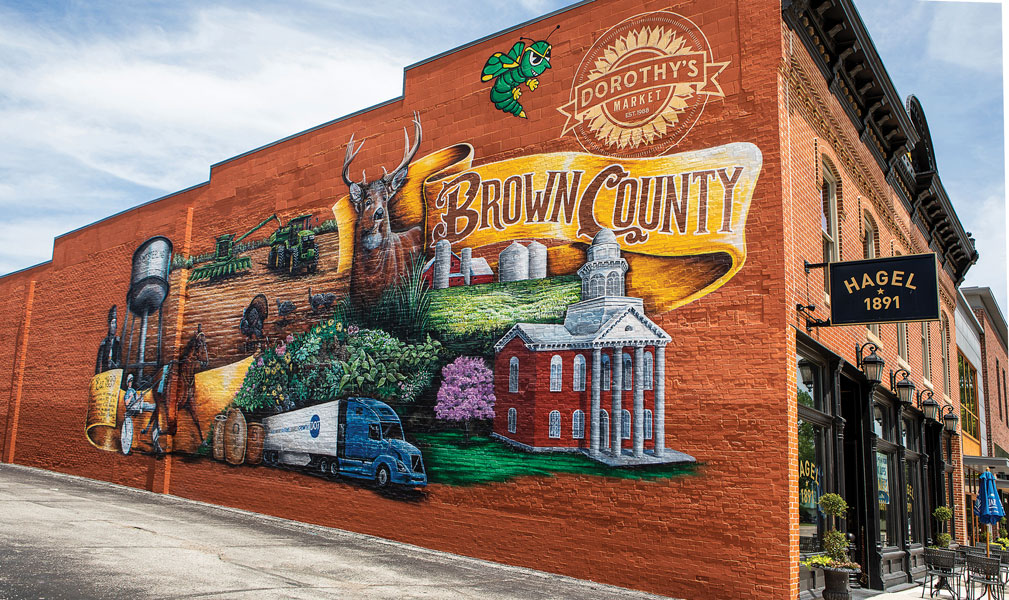 Another of Freeman’s murals is a tribute to Brown County on the Hagel 1891 restaurant in Mt. Sterling. “I loved every aspect of this project – researching the community, visiting local landmarks, meeting and talking with local historians, designing the piece, painting it, and getting to meet so many wonderful people while working on it,” he says. “Every aspect of this piece represents the past, present and future of Brown County and Mt. Sterling, and it was a distinct honor to produce this for them.”

Elements of the mural include the historic courthouse, a whitetail buck and a turkey to represent hunting and farm equipment, among others. There are tributes to U.S. General Jacob Brown, who defeated the British at the Battle of Sackett’s Harbor in 1813, and harness racer Tiger Bill. The mural also makes a nod to the Tastee Treat, Brown County’s square mileage (305) and the high school mascot.

Freeman didn’t want to overlook another major presence in the community either. “Mt. Sterling is home to Dot Foods, the nation’s largest food industry redistributor, so adding one of the many semis you see every day was a no-brainer. Brown County also has some of the most sought-after utilitarian pottery in the U.S. and at one time boasted hundreds of potters throughout the county,” he says, referring to the pottery featured in the piece. People can view Freeman painting the mural via time-lapse videos on his website, freeskystudios.com.

According to Freeman, every job is different – from prep to climate to products used. The background work, on the other hand, is generally the same: find a wall, create a design, get funding, paint it. He recently completed an
outdoor hunting mural in Pittsfield.

“Getting the design approved and getting funding requires jumping through hoops, but sometimes they can be pretty simple. I’ve done jobs with 60-page contracts funded through public fundraisers and some where we literally just shook hands, I was given a check and I set to work,” he says. “I’ve done some jobs where I’ve projected up the design, traced it on the wall and painted off that and some where I had to create a full-scale technical drawing and draw every detail by hand.”

There are challenges, he says. “Depending on the location, traffic can be an issue, power lines, pedestrians, weather is always an issue, equipment breaking down or getting stuck, access to the wall being obstructed, surface conditions, getting all the correct permits, overspray can be an issue, vandalism, insects – there’s nothing worse than painting on a barn and disturbing a nest of bees 20 feet in the air!”

Freeman says the tools needed also depend on the job. “The right prep materials and process is key,” he says – including the right paint for the surface, rollers, sprayers, brushes of all sizes, spray paint, masking, lots of tape, headphones, sunscreen, bug spray and a good playlist.

As unique as the art they create are the artists themselves. Mayosky’s first professional (paid) mural was for Penny Lane, also in Springfield. He says creating it hooked him once again on his childhood love of painting. 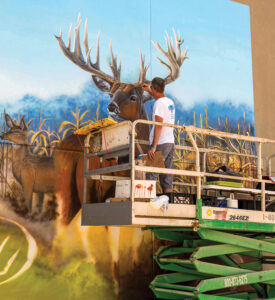 Troy Freeman of FreeSky Studios has painted a number of murals across Illinois, including a piece for Whitetail Properties in Pittsfield.

He explains his artistic process, “First, I look at the wall, then the structure of the building, then the area around the wall. Are there angles to pull an optical illusion? Are there pipes or trees that can be used to bring out depth in the work?”

Mayosky says street art is completely different than studio art. “The most unique part of murals is the need to adapt to the area you are painting,” he says. “In a studio, you have total control … but a mural is outside and exposed. People can see the process and the illusion. They see how it is made and how it goes from a blank, worn-down wall to the gem of a town.”

He believes there is energy in the art. “I will be quiet and listen to the feeling I get in my gut about a space or surface, open my instincts to what the energy is in the wall,” he says. “Once I get a good idea, I start to draw little quick sketches. I hardly ever do an exact design but prefer to have a loose idea. I do this because I feel the artwork needs to gain a life of its own. It has to follow a plan, but I need to allow the breath of creative ideas to pop up and add to the work. This is the best way I have found in capturing life in painting.”

In addition to his Lincoln murals, Mayosky has painted in many Illinois cities, including a Noah’s Ark scene for a veterinary clinic called Animal Kingdom in Taylorville, at Leo’s Pizza in Jacksonville, at several public studios in Peoria and at Knight’s Action Park in Springfield.

However, Mayosky says he recently completed his most significant work on Fort Hamilton Army Base in New York. “Fort Hamilton has a history that goes back to the firing shots in the Revolutionary War. … [Where] they fired these old cannons was the very spot I painted the scene,” he says. “The wall I painted faced the Statue of Liberty and the entire harbor of New York City … literally at the doorstep to our country.”

Behind that wall was the original cannon. During his six months of painting, he found himself humbled by the location. “What made this so amazing to me is I was able to paint the tomb of the first American rebellion. It contained the spirit of our Army and the history that is saturated in pain, triumph, fear and sacrifice.”

Murals celebrate moments like this in history, whether on a local or national level. “Mankind has been making murals since before the wheel,” Mayosky says. “Cave paintings and hides … murals were our first way to communicate ideas and movements. Political and environmental. Records and stories. Murals are a part of human evolution.”

To learn more about Troy Freeman, Michael Mayosky and their work, visit their websites:  freeskystudios.com and michaeljmayosky.com.