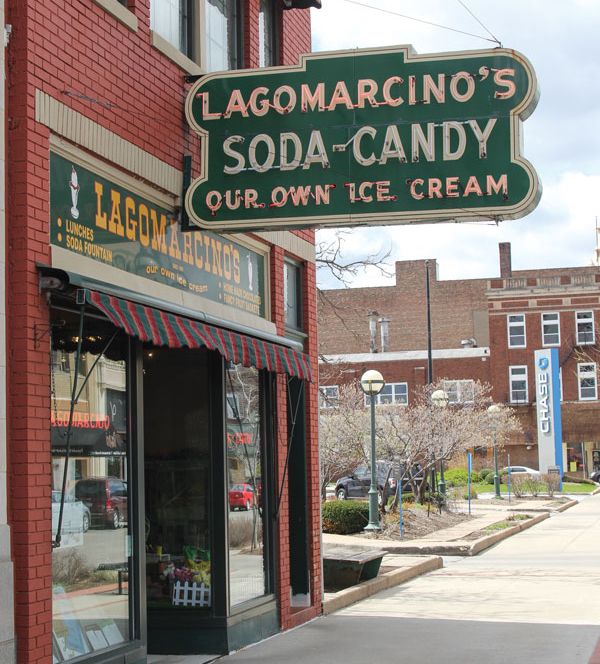 Chocolate runs in their blood

You can feel a nostalgic ambience as you step into the doors of Lagomarcino’s and see the long glass cases of brightly colored candies and a multitude of hand dipped chocolates. Look a bit further and the handcrafted dark mahogany wood of the original back bar, with its shelves of soda and sundae glasses, and the counter and round stools of the soda fountain grab your attention.

It doesn’t take a great leap of imagination to see young couples dressed in ‘40s fashion sitting in one of the dark high-backed wooden booths holding hands and sharing a handmade Coke or ice cream soda. Two straws, please!

Not much has changed at Lagomarcino’s in the 100-plus years since it opened its doors, including the white 1918 Cassini terrazzo tile floor with the blue snowflake pattern.

It all began with Angelo and wife Luigia immigrating from Italy to Moline in 1908, and opening a confectionary. They sold candy, tobacco, ice cream, and also had a luncheonette. The couple lived above the store with their three children, Charlie, Mary and Tom Sr., and all were involved in the business.

The story goes that in 1918 a peddler, selling hard candy and other sweets, came into the store. He told Angelo he had the perfect recipe for a hot fudge sauce and persuaded him to buy it for $25. That was a lot of money back then, and to say Luigia was less than pleased is putting it lightly! Angelo convinced his wife the sauce would be a perfect topping for their ice cream. And, as they say, the rest is history. 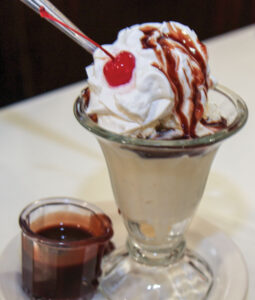 The delectable sundae of homemade vanilla ice cream, fresh whipped cream and a cherry, is served in a glass dish, no plastic here, with a small pitcher of its famous hot fudge that can be drizzled on top as you eat. It is still a customer favorite.

In 1938, Charlie bought the Meadowbrook Candy Company, which was going under due to the Depression. Meadowbrook Candy was known nationally for its chocolates, and the same recipes used there are what Lagomarcino’s still uses today. Charlie was the chocolatier of the family, along with his cousin Joe.

One of those candies, rarely seen in other stores, is sponge candy. It is light and crisp, with a molasses/caramel flavor and dipped in dark or milk chocolate. It can’t hold up to heat and humidity so it’s only available October to June.

Tom Sr. was the ice cream maker in the family and cranked out thousands of gallons in his lifetime. The luscious 12 percent butterfat ice cream is still handmade, one small batch at a time. Ten flavors are available on any given day, along with seasonal favorites such as fresh peach in the summer and peppermint stick in the winter. They now have 20-25 flavors in their repertoire. 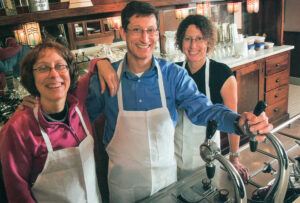 With the help of his six children, Tom Sr. and his wife Betsy ran the business after both of his siblings passed away. In 1981, Beth Lagomarcino felt herself being drawn back to the store, so she left her teaching career and returned to manage it. Her brother Tom Jr. and sister Lisa, followed. They can’t really explain it other than to say, “chocolate is in our blood.”

In 1997, they opened a second location in Davenport, Iowa, just across the Mississippi River from Moline. With 10 children between the three of them, some of the fourth generation are working in the stores as well.

Over the years, word has spread about this generations-old soda fountain. It has been featured in magazines such as Food Finds and Saveur. However, in February 2006, Lagomarcino’s received a call notifying them they had been nominated for the coveted James Beard Foundation Award, named after the chef and food writer. Unbeknownst to them, Rick Nelson, a food writer for the Minneapolis Star Tribune had visited the store and nominated them for the award. Since 1998, the foundation has recognized regional, locally-owned restaurants and designated them as America’s Classics.

The family had previously never heard of the award but, after a bit of research, were shocked to learn it was like “the Oscars of the food world.”

The family was quite honored, and in May 2006 family members attended the black tie ceremony in New York City. None of the family had been to the city before, so they went to Ellis Island where their grandfather and grandmother had entered the country. “It was just overwhelming,” says Beth Lagomarcino. “We may have sat on the same bench where they sat. To just feel what it must have been like for them to see the Statue of Liberty was so touching.”

Lagomarcino’s luncheon menu has not changed much over the years. The light Swedish rye bread on their sandwiches is made from a 70-year-old recipe, and they hand make their own ham, tuna and chicken salads. Rarely will you find a liver sausage sandwich or a banana nut salad on a menu, but you will there. You can wash it all down with a Green River, Coke or other soda, all are made by hand at the soda fountain.

You can order malts, ice cream sodas, egg cremes or a variety of specialty sundaes including the Quad-Cities Special, made to look like an old-fashioned paddlewheel boat. It consists of a split banana, a scoop of their rich vanilla and strawberry ice creams, smothered in strawberry and homemade chocolate sauces, real whipped cream, a maraschino cherry, and nuts with a paddle wheel and steam shaft made of cookies. It delights young and old alike!

Whether you are just passing through the Quad Cities on vacation, business or just taking a drive, Lagomarcino’s is well worth the stop. It is open 9 a.m. to 5:30 p.m., Monday-Saturday. For more information, visit www.lagomarcinos.com.