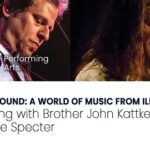 The Abraham Lincoln Presidential Library and Museum is proud to present an evening with two of Chicago’s premiere musicians, Brother John Kattke and Dave Specter, on Thursday, October 21 at 7pm in the museum’s Union Theater.

In celebration of our State of Sound: A World of Music from Illinois exhibit, Kattke and Specter each bring over 30 years of blues virtuosity highlighted by playing with a veritable “who’s who” of rhythm and blues and rock and roll legends, including Buddy Guy, Eric Clapton, Steve Miller, the Black Crowes, Matt Murphy, and Junior Wells.

ABOUT BROTHER JOHN KATTKE: As a resident musician at Buddy Guy’s Legends in Chicago for 30 years, Brother John has played with the likes of Eric Clapton, the Black Crowes, Otis Rush, Matt Murphy, Junior Wells, and Steve Miller. Led Zeppelin’s front man Robert Plant once told Brother John, “You play a mean guitar!” In addition to being a constant presence around Chicago’s club scene, Brother John can be found in the studio directing studio horn arrangements or playing guitar or keyboards.

ABOUT DAVE SPECTER: Whether touring the US or Europe with blues greats such as The Legendary Blues Band, Sam Lay, Steve Freund, and Son Seals or performing or recording with Buddy Guy, Jimmy Rogers, Mighty Joe Young, Junior Wells, Pinetop Perkins and many more, Dave has earned an international reputation as one of the premiere talents on the Chicago music scene. He has appeared on over 50 albums and DVDs as a guitarist, bandleader, or producer, with 12 albums on Delmark Records. A new double album celebrating Dave’s 30 years on Delmark Records will be released this fall.