Stories of Survival: The German Cinema Exodus to Hollywood 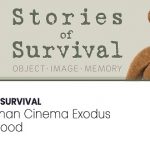 The 1920s and early 1930s were considered the “golden age” of German Cinema. The German film industry was noted for its innovations in film making and story telling and would inspire future filmmakers.

But as the Nazi regime grew to power in the 1930s, the lives and livelihoods of German Jews were increasingly threatened. That threat extended to the thriving German Film Industry and prompted an exodus by Jews in front of and behind the camera, to the United States and Hollywood.

Some of these Jews were able to escape Nazi persecution before the onset of World War II. Others were not so fortunate and would have to endure the unimaginable horrors of Nazi concentration camps before finally coming to America after the war.

Regardless of their journeys, those who left Nazi persecution, both Jewish and non-Jewish, would have a profound impact on American Cinema for decades to follow and their influence continues to this day.

Join film historian Jay Sorkin on Thursday, August 25 at 7:00 p.m. in Union Theater at the Abraham Lincoln Presidential Library and Museum as he shares the stories of survival that would bring some of Germany’s top movie talent to America and their important contributions to Hollywood.

Many of the names you’ll instantly recognize — Peter Lorre, Hedy Lamarr, Billy Wilder, Otto Preminger, Victor Borge, to name a few — from their iconic films and countless number of Academy Awards. Plus, Jay will examine the importance of the war-time classic, “Casablanca,” in which 35 of the 38 cast members were foreign, most of whom had fled the Nazis.

This is a free program to attend. However, reservations are required. Doors will open at 6pm with your opportunity to view our special exhibit, “Stories of Survival: Object. Image. Memory,” a traveling exhibit from the Illinois Holocaust Museum & Education Center that showcases more than 60 personal items brought to America by Survivors of the Holocaust and genocide.

Thursday, August 25, 2022 at 7pm in the Union Theater at the Abraham Lincoln Presidential Library and Museum. The program is free to attend, but advance reservations are required.