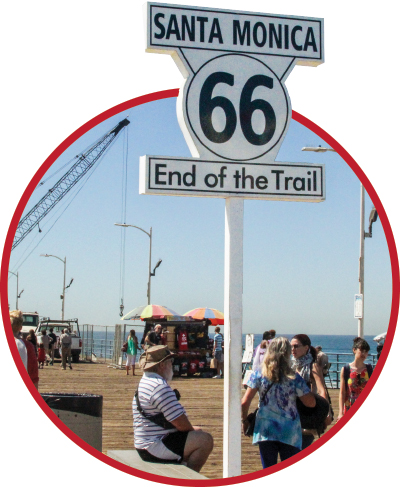 From the beginning to the end of Route 66, travelers can find a wide variety of interesting stops along the way.

The now legendary Route 66 was established in 1926 as the federal government began to establish a numbered road system. In reality, it was a collection of state roads bundled together, renamed, then over the course of the next 60 years, rerouted and upgraded and eventually rendered obsolete by interstates. It was the preferred route to the west, but as with all roads, it ran both ways through eight states hosting journeys, both epic and mundane.

In its heyday, for every traveler who went from Chicago, the road’s official start point, to its end in Santa Monica, Calif., there were thousands, perhaps tens of thousands, who used it to get to and from the closest town to pay bills, pick up groceries or visit the doctor. It was a road, two lanes of asphalt so dangerous in some sections that it became known as “Bloody 66,” yet in the national psyche, it has become emblematic of the American spirit. Route 66 is one of a handful of things – George Washington, cowboys and Coca-Cola®, that symbolize America to the world.

It has inspired a song (most famously performed by Nat King Cole); a television series that ran four seasons (1960-1964); boasts 12 associations (three of them based in European countries); is the subject of 16 websites, and over 30 publications detailing the history, sights to see, places to shop and/or eat, or a combination of all those.

This 2,200-mile plus asphalt corridor, that was once the means to a destination, has itself become a destination. Route 66 was officially decommissioned in 1985, but the ink was scarcely dry on the document before groups began forming to resurrect the old road. Illinois is where Route 66 officially begins, so it is fitting the Route 66 Association of Illinois was one of those pioneering groups. Organized in 1989 “to preserve, promote and enjoy the past and present of US Highway 66,” it has been instrumental in the development of Route 66 as a tourism draw for the state.

The Pontiac headquarters for the association, is also one of 13 communities that participate in the Red Carpet Corridor Festival. The festival is held along a section of the old road stretching from Joliet to Towanda, and allows visitors to sample local hospitality and memorabilia, while viewing artifacts of the road’s history.

Joliet boasts the Rich and Creamy Ice Cream Stand with the dancing Blues Brothers on the roof; and Lexington offers Memory Lane, a segment of the original road now a walking trail lined with vintage signs. Odell’s restored Standard Oil Service station is a must see, as is Schenk’s Garage in Towanda, and the Route 66 Hall of Fame and Museum in downtown Pontiac. Run by the Route 66 of Illinois Association museum, housed in the old city firehouse (along with a military museum and the old city jail), home to hundreds of items relating to the road, including a booth from the first Steak n Shake restaurant, a chain that had its beginnings in Normal.

Docent Rosalie Geralds, who has worked at the museum for eight years, says the appeal is truly universal. “Here at the museum, we have seen people from all 50 states, as well as visitors from 19 different countries,” she noted. “We even had a school class from South Africa who had won a trip for the entire class, and they chose to tour Route 66.”

Visitors are allowed, indeed encouraged, to park their vehicle and/or themselves in front of the huge mural of a Route 66 road sign that graces the side of the building, “the largest Route 66 mural in the world,” Mrs. Geralds proudly informed me, “and the roadway in front of the sign is made of paving bricks from the original road.” 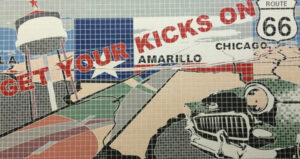 This tiled mural in Amarillo, Tx., is just one of many murals found along the 2,200-mile long Route 66.

The Village of Gillespie, just south of Carlinville, marked the inaugural year by unveiling a mural painted on the side of a downtown pharmacy. The mural depicts the pharmacy as it looked in the 1920s, featuring an iconic Route 66 road sign and a vintage touring car. Another interesting bit of memorabilia along the route is the world’s largest catsup bottle in Collinsville. According to local historian and president of the Blue Carpet Corridor Coalition, Cheryl Eichar Jett, “In spite of a very rainy weekend, our first year’s event was successful. Over 200 cars made the tour along with several motorcycle groups, and visitors made stops in practically all of our participating communities.” As for 2016, she adds, “All of our communities are excited, looking forward to a good second year, and we’re hoping that the Illinois Museum in Gillespie will be ready in time for the festival.” This year’s Blue Carpet Corridor Festival is scheduled for the weekend of June 11-12.

Originally there were to have been three corridors; red for the north, blue for the south and white for central Illinois. The central corridor has yet to establish itself as such, but central Illinois, specifically Springfield, is home to two institutions that are tied to the Mother Road (a title bestowed upon Route 66 by none other than John Steinbeck in his novel The Grapes of Wrath.) – the International Mother Road Festival, and Springfield eatery, the Cozy Dog Drive-in.

Developed in the mid-1940s by Ed Waldmire, Jr. while he was serving in the army, the Cozy Dog, a hot dog dipped in a cornbread-type batter and served on a stick, was introduced at the Lake Springfield Beach House. By 1949, the Cozy Dog Drive-in was located on “Route 66 Sixth Street,” where it still remains (the current building is next door to the original Sixth Street location). The venerable drive-in serves 400-500 Cozy Dogs a day, a figure that goes up significantly during the September weekend when Springfield hosts the Mother Road Festival. A word of caution, though; when you step up to the counter at the Cozy Dog Drive-in to place your order, do not, and I repeat, do not ask for a corn dog. They only serve Cozy Dogs.

Good food, music and motoring is the recipe for the International Route 66 Mother Road Festival that takes place every September (September 23-25 this year) in downtown Springfield. If you grew up in the ‘40s, ‘50s, ‘60s, or even the ‘70s, it’s a trip down memory lane with over a thousand cars on display.

So whether your delight is a classic such as a 1956 T-bird that looks as if it just came off the showroom floor, a monster hot rod that looks, and sounds, like the fevered dream of a fanatical gearhead, or a restored pickup truck, chances are you will find it as you wind your way through the downtown.

Route 66 in Illinois is a microcosm of the road across the remaining seven states. Sections of the old route have been subsumed into other state highways, miles have been obliterated by interstates, but there are also places where as you motor west, the decades fall away, and for a brief moment you are in the embrace of the Mother Road.

You might also check like to check out the brand new Cruisin’ with Lincoln on 66 Visitors Center in Bloomington-Normal. For more information go to http://cruisinwithlincolnon66.com/. 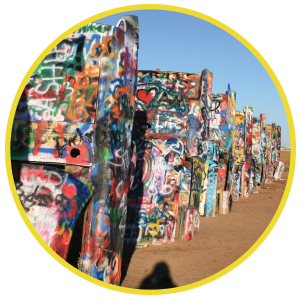 Route 66 is home to some strange sights; the giant catsup bottle outside of Collinsville, Ill.; the blue whale at Catoosa, Okla.; the wigwam motel at Holbrook, Ariz., but perhaps the oddest of all is the Cadillac Ranch outside of Amarillo, Tx. It rises out of the Texas hardpan alongside a section of I-40 like someone drunk, directionally challenged, short of stone, and armed with every shade of paint known to the western world, had started to build a modern Stonehenge.

Collaboration between three members of a counter culture art group, Ant Farm, and an eccentric Texas millionaire, Stanley Marsh 3, the ranch was created in 1974 just off route 66 west of Amarillo. It is a series of Cadillacs ranging from a 1949 model to a 1960, buried nose down facing west. Its original concept (such as it was) was to document the growth of the tailfin on Cadillacs, and make some statement about the American culture. In 1997, Marsh had the cars relocated to their current location off I-40 and there they remain.

Originally, the cars were all factory colors, and easily recognizable as Cadillacs. Over the years the public has taken pieces from the cars for souvenirs, and spray painted them so that in some cases all that remains are frames, axles and chunks of sheet metal too big to carry off. In spite of, or perhaps because of, the desecration the site remains wildly popular with folks from all over the world. A frontage road allows access to the property and most folks doing the Mother Road pilgrimage arrive with a spray can of paint and a camera to record their contribution, because chances are their work will be covered up by someone else within a few days. 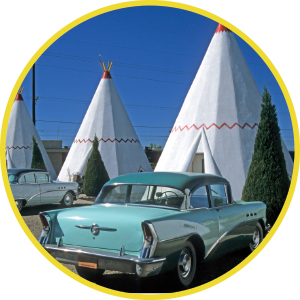 The increased highway travel that led to the creation of Route 66, and other numbered highways, also gave rise to the “motor hotel” or as we know it today, the motel.

Route 66 certainly had its share of them, but as sections of the highway closed, so did many of the motels. All that remains are some decaying buildings, a highway plaque, memorabilia in an antique shop, or the memories of people “of a certain age.” But in Holbrook, Ariz., the Wigwam Village is still in business and looks, both inside and out, very much as it did when it opened in 1950.

Although not part of the original chain established in 1935 outside of Horse Cave, Ky., the motel in Holbrook was built under license and to the same specifications. There are 15 wigwams (not rooms, teepees or units) plus the main office. Each wigwam is furnished with the original restored hickory furniture, two double beds, cable TV and a window mounted air conditioner. There are no phones in the wigwams, but there is a small bathroom. In keeping with the nostalgia theme, a number of vintage automobiles are scattered throughout the complex, as are small metal benches with “Wigwam Village #6” etched into them.

Wigwam Village #6, as it has been designated, is listed in the National Register of Historic Places, as are two other surviving villages, one in Cave City, Ky., the other in San Bernardino, Calif.