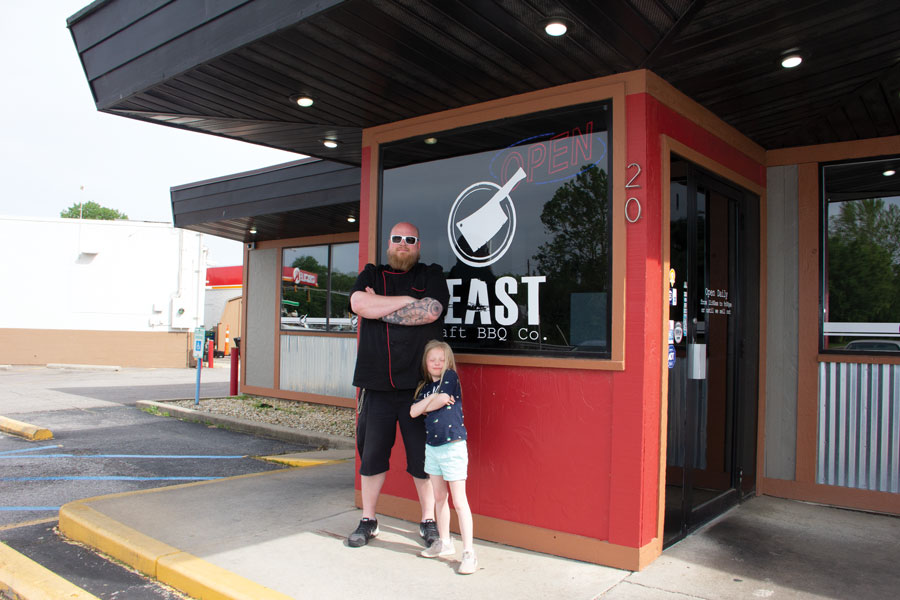 Illinois barbecue is heating up

Barbecue is synonymous with a good time. Warm weather, cooking outside, hanging out with family and friends—these elements lend to our love for the many interpretations of this ubiquitous dish. But for some, barbecue is a way of life.

David Sandusky, owner and pitmaster of Beast Craft BBQ Co., Belleville, believes the role of food in the world’s different cultures bleeds into all facets of life. He says barbecue can be found all over the world in varying contexts; in the U.S., it’s subcultural, almost denominational.

Well-known styles in the States are often referred to by their place of origin, including North Carolina, South Carolina, Memphis, Kansas City and Texas. They vary in types of meat, rubs and sauces used. 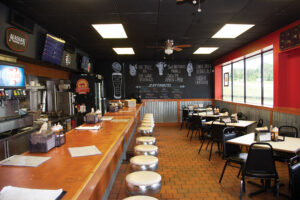 Though the emphasis on barbecue in Illinois has historically been less than that of other states, Sandusky asserts that people are now paying more attention, and that it is at a point of escalation. He mentions the growth of barbecue in Chicago and, of course, “grandfather” of barbecue Mike Mills, owner of 17th Street Barbecue in southern Illinois.

Sandusky says there is a distinction between the competitive barbecue circuit and the barbecue restaurant industry—that in some ways they are mutually exclusive.

For instance, at Beast Craft BBQ, the focus is on using the very best meats and doing as little as possible to them—as Sandusky puts it, “letting the animal speak for itself”—whereas, competitive barbecue is criteria-based.

Sandusky left a fine-dining background for barbecue. He says he chose it because it’s hard, and he is highly competitive. In an industry so established, Sandusky wants to shake things up. His passion is what he calls the premium landscape, reflected in Beast’s motto: “All killer, no filler.” This applies to sides as well. He’s not going to serve something because it’s expected—only if it’s outstanding.

Because of this, his entire pork menu is sourced from Compart Family Farms in Minnesota. According to Compart’s website, their method is “a carefully managed pork breeding program … the result of 55-plus years of combining the very best purebred lines of the Duroc breed.” They also employ a proprietary feeding program and reduce stressors in their livestock’s environment to optimize the quality of their meats.

As Sandusky said, unlike the restaurant industry, competitive barbecue is based upon a certain set of criteria. For example, Kansas City Barbeque Society’s (KCBS) rules and regulations require competitors to submit their cuts of meat for inspection and to use only wood, wood pellets or charcoal as heat sources. KCBS categories are chicken, pork ribs, pork and beef brisket. Each is judged on appearance, taste and tenderness.

Pigs and Swigs Festival/Up in Smoke on the Square, Lincoln 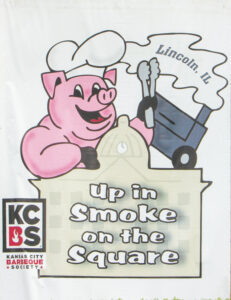 Bryan and Kari Luke, of Cissna Park, competed in barbecue competitions for 13 years. Now, they are representatives of the Steak Cookoff Association (SCA). They echo Sandusky’s sentiments, both that Illinois is making a name for itself on the map, and that barbecue competitions and restaurants vastly differ.

Their journey on the competitive barbecue circuit began in 2005, first in “backyard” competitions and later as “professional” in Kansas City Barbecue Society contests. One year, they participated in 22 events. The Lukes say Lincoln’s Pigs & Swigs/Up in Smoke on the Square is one of their favorites because of the location and the people.

For them, it all started with a trip to Memphis in May’s World Championship Barbecue Cooking Contest. There they met two men, one a competitor who sold smokers, the other a judge. Bryan bought a smoker, which later led to a second-place finish for ribs at his first backyard competition in Le Roy. It was then, Bryan says, “The barbecue bug bit.” They named their team “It’s 5 O’Clock Somewhere” and were on the road to becoming award-winning professional competitors. 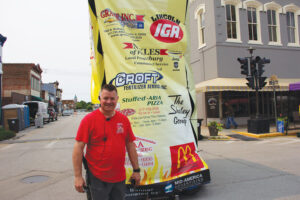 They have since retired from competitive barbecue but that doesn’t stop them from attending events. As representatives for SCA, they oversee aspects of steak competitions, including judging, scoring and the cooks themselves. More importantly, they get to see old friends. One of those friends is the Lincoln barbecue event’s current organizer, Chris Graue.

The Lukes love the friendly culture, saying everyone hangs out except for competition time, when focus zeroes in on the food. Still, Bryan says participants can always borrow something they need or get help from each other. “We met our best friends because of barbecue,” says Kari.

Things have changed since they started out with just a pickup truck and a smoker and slept in lawn chairs. (They eventually graduated to a motorhome and smoking trailer.) They’ve noticed that it’s become harder for backyard competitors to bridge the growing divide between amateur and professional competition.

These days, though competition for them is a thing of the past, their love of barbecue remains. They serve it for lunch at their convenience store, Luke’s One Stop, in Cissna Park. They also recommend competitions to try, including the Murphysboro Barbecue Cook-off, the Westmont Red White and BBQ Festival, and Belvidere Heritage Days BBQ Showdown. 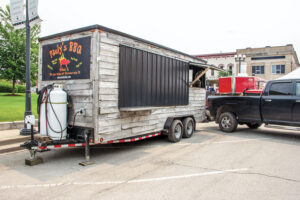 Smoking trailers fill the square in Lincoln for the annual Pigs & Swigs/Up in Smoke on the Square.

Chris Graue, who heads up the Pigs & Swigs barbecue competition, also competed for several years, drawn by his love of cooking and trying different recipes and techniques. Early on, he says he had the opportunity to talk to barbecue icons like Mike Mills. “We’re a family,” he says.

According to Graue, competing is hard work, especially for those doing it up to 38 weekends a year. He’s content with overseeing the competition, getting to experience that same camaraderie and bringing people to Lincoln. “We’re proud of our town,” he says.

The event is in its ninth year, originally part of the Lincoln Balloon Festival. The “Swigs” portion—featuring craft beers and a homebrew competition—was added five years ago.

Graue says turn-in for four categories in an hour and a half can be challenging. The backyard competition is a little easier with only two categories. The highest number of teams they’ve had competing was 53, which was demanding for organ

izers as well. He says keeping the number of teams to the mid-30s is easier to manage.

He foresees a lot of potential growth for the SCA steak competition (now a sanctioned event) because it is a less expensive and speedier process. Graue has seen the number of those teams grow in just a few years from 22 to 39.

Graue’s advice to all would-be competitors? “Take it slow, like the barbecue.”

Though connoisseurs agree that barbecue experienced from a restaurant and competition barbecue are two entirely different things, the pitmasters of both love what they do. It appears that barbecue lovers in Illinois are reaping the delicious rewards.

Aug. 10-11
4th Annual Chillin’ and Grillin’ for the Boys in Blue
Marine