Life on the Reverse Underground Railroad 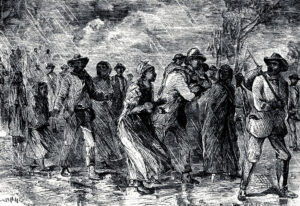 Panting, he scurried through the brush, his tattered clothes and bloody feet ­evidence of the harrowing journey he’d endured since escaping days earlier. As the sound of men’s voices and baying hounds grew louder, he knew he’d soon be captured, and the brutal whippings on his already scarred and bloodied back would resume.

Such was the fate of many runaway slaves. They were hunted like dogs, treated inhumanely and sold like ­livestock. Prior to the Civil War, the Underground Railroad, a network of secret routes and safe houses throughout Illinois and other states that bordered slave states, helped slaves escape to northern free states, and Canada. However, the lesser-known Reverse Underground Railroad, which also operated then, revealed a more sinister side of the U.S. slave trade. This network of stations was used to hold and transfer kidnapped free blacks or runaway slaves, who would be sold to the highest bidders.

Since stories involving the Reverse Underground Railroad can vary widely, there is a blurred line between fact and fiction. But one truth cannot be denied; life for the poor souls caught up in this trafficking operation was brutal and tragic.

In the early to mid-1800s, John Hart Crenshaw was one of the most prominent businessmen in Illinois. He leased, and even­tually purchased thousands of acres of salt tracts from the government in Southern Illinois. Work in the salt mines was ­grueling, attracting only the most ­desperate free men. The result was a labor shortage. Since salt was a necessity for ­preserving food and for nutrition, Crenshaw was allowed to use slave labor in the operation, thus increasing his wealth exponentially. 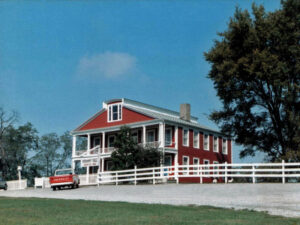 The stately mansion Crenshaw built in the 1830s on Hickory Hill near Equality for his wife, Sina, and their children, was a showplace. The first two floors served as the family’s living quarters and a place to entertain wealthy ­visitors and politicians. However, hidden behind this tranquil “mask” was a third-floor attic that contained 12 tiny, barred stalls believed to have served as an illegal “jail” encased in thick walls.

Legend says that Crenshaw employed bounty hunters who pursued runaway slaves and unwary free blacks. Those captured were transported by boat from the Ohio River to the Saline River, or by carriage. A separate entrance in the back of the house and a hidden tunnel to the river provided direct access to the attic. Free blacks’ freedom papers were destroyed, and they were tortured until they reluctantly changed their status to “slave.” The prisoners were chained, and some were held until they were sold, some labored in the salt mines, and others were used for “breeding” to feed the slave trade’s voracious appetite. The mansion became known as “The Old Slave House.”

Since the Crenshaws were pillars of the community, most locals turned a blind eye to the illicit slave trading practices, and people from the outside were unaware of it. In fact, according to Southern Illinois Author, Historian and Blogger Kenneth Dwain Harrelson, even Abraham Lincoln once visited the Crenshaw house when he was on the campaign trail in 1840, possibly for William Henry Harrison. He says, “Both my Great-Great Grandmother Jeniza (Gates) Harrelson and her twin sister Juliza (Gates) Haley Burns danced with Lincoln at the Crenshaw house at a party given in honor of his visit there. They rode a mule together side-saddle [to the ball] and were 13 at the time.” Based on Harrelson’s family lore, Lincoln, “The Great Emancipator,” may have spent that night there. Such irony.

Crenshaw was eventually sued but never convicted in some free black kidnapping cases, but revenge can be exacted in other ways. Legend says that after ­savagely ­beating some female slaves one day, male slaves attacked him and severed his leg with an axe. He was later ­photographed holding a crutch, which some say lends ­credence to the story.

The Old Slave House (now closed) is the only station in the country left standing on the Reverse Underground Railroad. Throughout history, many of the home’s visitors have reported paranormal activity, and hauntedhouses.com lists it as one of the most haunted houses in the country.

The lurid activity on the Reverse Underground Railroad ceased long ago, and the Old Slave House is now ­shuttered, but tales of slavery and the part Illinois played in this ­terrible chapter in history will live on for generations to come.

Beecher Hall-Jacksonville (on campus of Illinois
College. Tours are available when school is in session)