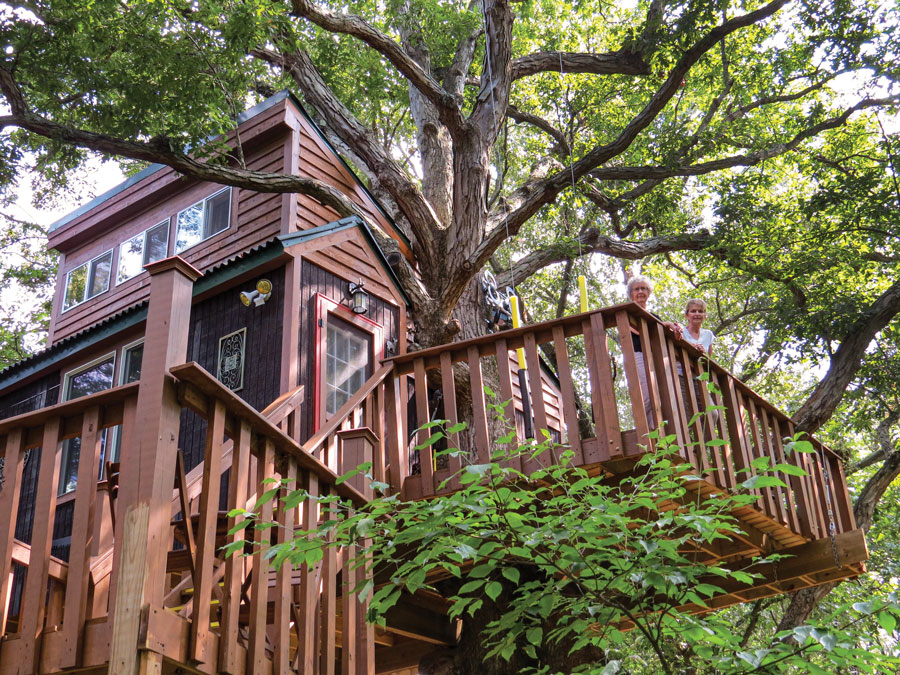 Treehouses – not just for kids

Glamourous and camping. These two words don’t seem to go together. Yet, in recent years, “glamping” has become increasingly popular. It’s best for those who want to be one with nature but not give up modern conveniences. You can even take your family glamping in the canopy of the Illinois Ozarks.

“Glamping is the perfect intersection between the members of the family who really want to go camping and those who want the hot water and a bed,” says Elizabeth Canfarelli, owner of Timber Ridge Outpost and Cabins. “Glamping offers something for everybody in the group. It’s the perfect compromise.”

Located just a few miles from Garden of the Gods in Shawnee National Forest, Timber Ridge offers a unique glamping experience with rustic cabins and treehouses. “It brings back a lot of childhood fantasy,” Elizabeth says. “It’s the romanticism and feeling of revisiting something from childhood.”

Hailing from the Chicago area, Elizabeth and her husband Marty moved to Hardin County after retirement. Marty worked 25 years building high rises. Elizabeth was a senior project manager for a building supply company.

“We ‘retired.’ I put that in quotes because I work more hours now than I ever did, but I love it,” she says. “We were going to put a few cabins in and see where that went.”

Because there were other cabins in the area, Elizabeth wanted to do something different. “People are really into the experience vacation,” Elizabeth notes. “Before, it was about going somewhere, but now it’s about having an experience. And treehouses are a different experience.”

When the Canfarellis decided to build treehouses, they hired a treehouse builder and arborist to evaluate their trees. He selected the two best for the job and built the platforms and suspension systems. Marty and two others built everything else.

“It’s basically a big deck up in a tree,” Elizabeth explains. “Then you just build on top of the giant deck. … When we did the treehouse thing, it went crazy and took off from there.”

The White Oak Treehouse, the larger of the two, is nestled 24 feet up in a in a 2-century-old white oak. The main floor has a living room with a sleeper sofa, kitchenette and bathroom with a shower. Going up a ladder and through a hole in the ceiling, you’ll find a queen bed and full-size mattress. This treehouse sleeps four to six. 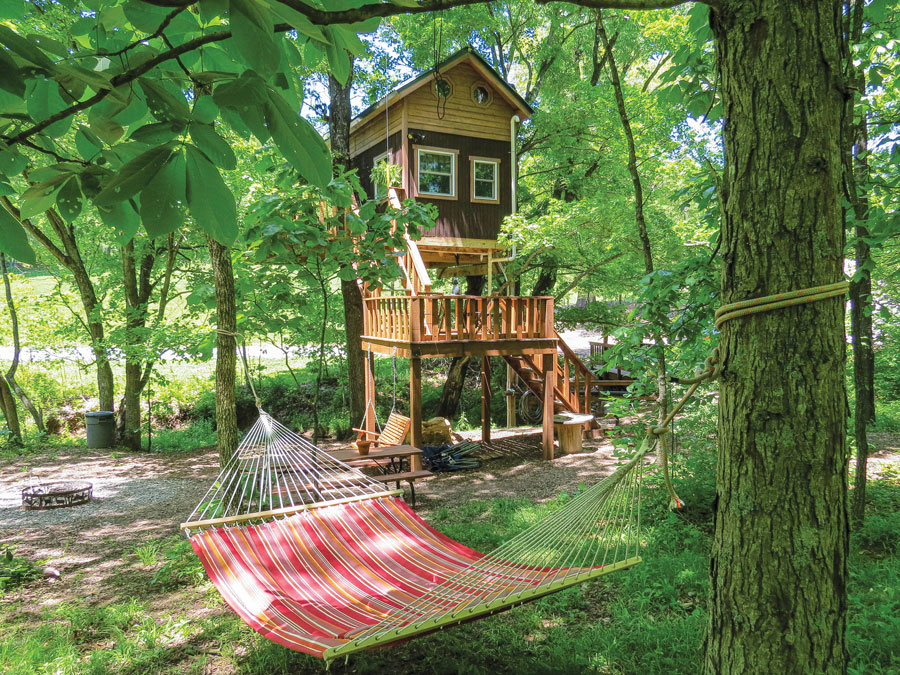 The quaint Maple Oak Treehouse is perfect for two, but will sleep four; however, Elizabeth doesn’t recommend it for four adult-sized people. This treehouse is equipped with a kitchenette and bathroom, a sofa bed on the main floor, and a queen bed in the loft.

Outside of each treehouse is a park-style grill, outdoor seating, a swing and a campfire ring including complimentary firewood.

The treehouses undergo regular maintenance and inspections for safety. The biggest issue they’ve had is with squirrels. “Squirrels keep trying to chew their way in,” Elizabeth says. “We are in their realm, so we battle interesting things because we are up in the tree. [The squirrels] really find it inconvenient that they’re not allowed in.”

Elizabeth realizes treehouses aren’t for everyone, especially those with ambulatory issues who can’t go up the stairways but want to spend time with family too. That’s where the cabins come in.

“A family with kids might rent the treehouse, while grandma and grandpa rent a cabin with a nice, easy staircase, so they’re all together,” she says. “That’s why there’s a variety of units instead of just treehouses or log cabins … so there’s a multitude of different experiences to accommodate different types of people.”

While building the treehouses, they started with two Amish-built cabins to generate income. They came as shells with the interiors still needing finishing. The two-story cabins have the same amenities as the treehouses; one sleeps two to four and the other sleeps six to eight.

Eight years later, Timber Ridge now has nine units after adding two antique cabins and three homes. “We got the antique log cabins because we love the history,” Elizabeth explains. The houses are for larger groups that want to stay together.

The antique cabins from Kentucky were built circa 1850. They were dismantled, transported and rebuilt at Timber Ridge. The antique Twin Oaks Cabin sleeps four to six. In addition to its history, a tree deck was built behind this cabin which sits 12 feet up in the canopy.

“By doing the tree deck, it gave people who wanted to stay on the ground and wanted to get in the canopy the chance to have a little bit of both,” Elizabeth says.

The antique Cottonwood Cabin was originally built as an outpost store where guests could check in. Plans changed when they decided to build the Garden of the Gods Outpost down the road for guest check-in, tourist info, souvenir shop, convenience store and kayak rental.

The cabin was finished and available for rent earlier this year. The Canfarellis were able to save the original hand-chiseled stone fireplace and its hand-carved wood mantel. Back in its day, Elizabeth says a family of 11 people lived in the cabin, but today it sleeps two to four.

While these treehouses and cabins may be in a remote area, they are equipped with hot water, heat and air conditioning, television, and Wi-Fi.

“You don’t expect to have fiber optic in a treehouse. … Some parents call ahead and say, ‘Hey, can you just take [the Wi-Fi] out? Just unplug it. When I get there, I am going to tell my children that it’s broken. … Make sure that you back me up,’” Elizabeth says with a laugh.

Staying at Timber Ridge provides a chance to get away from it all. On a clear night, there’s a stunning view of the Milky Way, and you’ll be lulled to sleep by the sounds of nature or the pattering of rain.

“We are very remote,” Elizabeth says. “We don’t have a single stoplight in the entire county, so you don’t have all the traffic or the noise of society. Your kids can go out and run, and you don’t have to have your eyeball on them every second. Let them run and be children. … It’s getting away and unplugging. It’s regrouping with family.”

According to Elizabeth, pets are a big part of many families, which is why Timber Ridge is pet friendly. “We’re all about family, and pets are part
of that,” she says.

In the past eight years, Elizabeth estimates thousands of people have stayed in the treehouses and cabins. While some visitors come from just down the road, Timber Ridge has hosted people from 37 countries.

“I meet really interesting people from all walks of life, different nationalities and different belief systems,” she says. “Sometimes I have to get Google Translator out to communicate with people checking in. That’s a lot of fun.”

According to the U.S. Department of Agriculture’s Forest Service, nearly 1 million people visit Shawnee National Forest each year, and Garden of the Gods is the most photographed location in the forest.

Despite the number of tourists, Hardin County has the lowest population in the state, and Elizabeth says the area is economically challenged. “We’re very remote,” she explains. “There are no highways going through. There’s no mass transit. It’s a destination. You’re either heading to Hardin County or you don’t find it.”

Unique to the area is a local tourism group the Canfarellis are members of called the Bed Tax Board. Elizabeth explains that while they are all competitors, everyone works together to be sure visitors have a place to stay.

“I can start directing them to everybody else because once I’m full, I’m full,” Elizabeth says. “The more people we can bring to our community, regardless of where they’re staying, the more demand there is for jobs and the more tourism dollars are coming into the couple of restaurants and gas stations … and that makes a big difference when you’re this little.”

For those traveling to Hardin County, Elizabeth suggests visitors bring good hiking shoes, a camera and a fun attitude. “Plan to decompress and have fun,” Elizabeth says. “Hike around and see beautiful things you’re not going to find anywhere else around Illinois. As far as staying at Timber Ridge, I tell people, you need your food, your family and charcoal if you plan on grilling out. We’ve got the rest covered.”

As members of SouthEastern Illinois Electric Cooperative, the Canfarellis are part of the cooperative family. “Staying here is supporting a whole community,” Elizabeth says. “Just come and plan to have fun. You don’t have to go far. You can be in Illinois and have a phenomenal experience.”

The anatomy of a hack
Vacation guidebook
To replace or not replace
Camping season is upon us
Sowing seeds for a bountiful harvest
This spring, pitch in to help pollinators
U Drive. U Text. U Pay.
Fritz and Frites