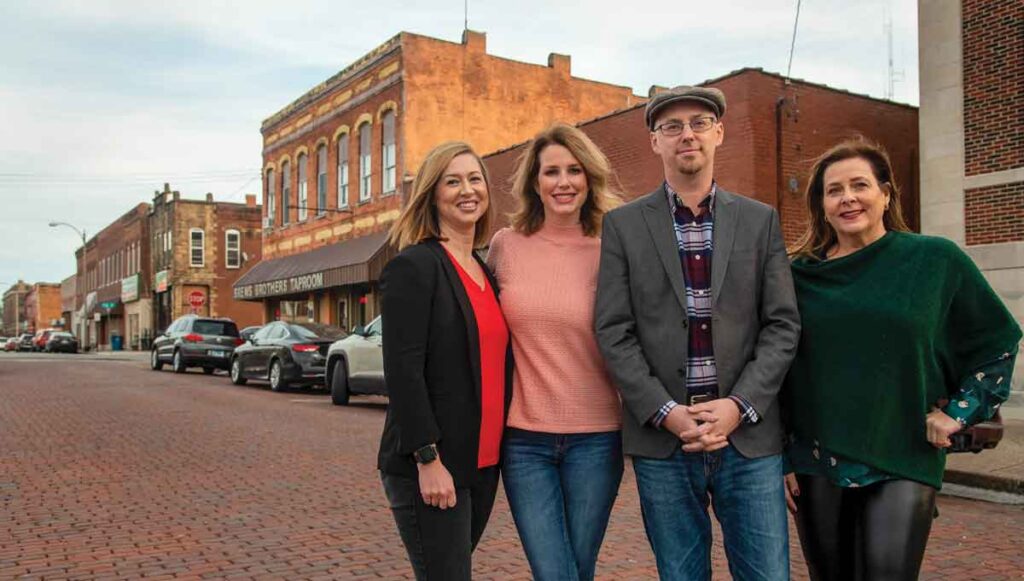 Like many rural communities throughout Illinois, recent years and decades have not been kind to Murphysboro. Located about 100 miles southeast of St. Louis, Murphysboro has suffered from the shuttering of factories, a roller-coaster farm economy, declining enrollment at nearby Southern Illinois University and a graying population. Together, the result has been a shrinking population, empty storefronts and, by many counts, a community on the decline.

Yet, a core group of residents and entrepreneurs in the Jackson County seat have taken the mantra of “Murphy Pride” to heart and are putting time, money and energy into revitalization. Their efforts are beginning to pay dividends. Building on several popular community events, including the annual citywide Apple Festival, several popular musical events and recognition as the barbecue capital of Illinois, efforts began very simply – making downtown Murphysboro look better.

“One thing people don’t realize is that 4 million vehicles travel through downtown Murphysboro every year; that’s more people than live in the city of Los Angeles,” says Murphysboro Mayor Will Stephens. “I think that means we have a real duty to do what we can to make that first impression for people as good of one as possible. When you have that many people coming through, you want them to stop and come back again.”

Led by the Murphysboro Main Street organization, volunteers have made aesthetic improvements to the downtown, with the belief that more people will desire to visit, shop and perhaps even live in an attractive community. City government has secured grants and other funding for improvements to sidewalks, new features along those sidewalks and more. 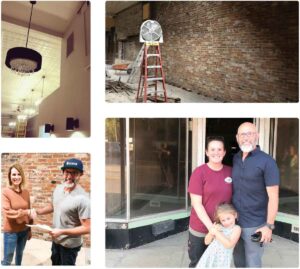 Brooke Guthman (pictured left) and her husband Ryan are renovating one of their buildings that will soon be home to Cold Blooded Coffee and Roastery, owned by TJ Cowan (pictured right).

Stephens says the efforts have been a collaboration of the city, civic groups, residents and business owners. He adds that as one group has begun work, others have followed suit. A perfect example is the establishment of a tax-increment financing (TIF) district for the downtown which aldermen passed once other efforts were underway.

“This was something we wanted to do for a while, but frankly, it was the efforts of Murphysboro Main Street that gave us the extra push to get it done,” he explains.

Main Street has organized a number of special events and functions in the downtown. The benefits have been two-fold: bringing the community together and raising funds to make tangible improvements.

Additionally, the mayor adds that a number of Murphysboro residents have “put their money where their mouths are,” and invested in empty downtown buildings, refurbishing the structures and making them more attractive to new businesses. It is an effort which is working.

Brooke Guthman is one of those people. As member services manager for Egyptian Electric Cooperative, which serves the area, Guthman’s first exposure to the idea of downtown revitalization was from a speaker at a national conference sponsored by Touchstone Energy.

“He (the presenter) was talking about how the millennial generation [people born between 1981 and 1996] are moving to rural America and want to invest their resources into small downtowns, creating what they want in their community. He said what is most important to them is quality of life amenities and experiences,” she recalls.

Guthman says she was moved by the presentation and wanted to do something to help her hometown. In fact, she began efforts to enlist the speaker, Zach Mannheimer of McClure Placemaking, to work with the community. She brought together the city, a local countywide economic development organization, the Main Street group, area schools and private individuals to bring Mannheimer to town.

Within four months, funding had been secured for the consultant and work on a revitalization plan was initiated, encompassing everything from streetscapes to public art, business incentives and a plan for housing.

“We really kind of took a leap of faith on this,” Green explains. “We’re trying to get people to buy into this downtown revitalization concept, but what value does it have if I’m not going to put my own skin in the game?”

Green says her plan has always been to retain the structures’ history and charm, but make the buildings attractive to businesses, just like efforts to beautify the downtown. Both revitalization advocates note how the community has pulled together and things have seemingly fallen into place.

“I feel like it was meant to be that we all were able to get the buildings,” Guthman explains. “We’ve been recruiting businesses not just to come into our buildings, but into any empty storefront. We’re trying to start a movement so people will be like, ‘Wow, I want to be part of this,’ and encourage them to invest in an old building or in a business and just really believe 100 percent that this will work like we do.”

Longtime Murphysboro business owners share the confidence in the community. Amy Mills’ family business has brought a lot of attention to the community. 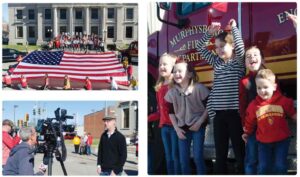 Ever since Bon Appetit magazine named 17th Street Bar and Grill’s barbecue ribs the best in the country and bolstered by frequent appearances on cable’s Food Network, the Murphysboro restaurant has been a popular destination for diners and for other restaurateurs who come for professional barbecue classes. The company is also bringing a new manufacturer to the community.

“Besides bringing people to our door – on any given day we have people from four different states and even other countries in our restaurant – we are reinvesting in Murphysboro by building a barbecue sauce factory for our sauce and contracting for others, too,” she explains.

When complete, the 30,000-square-foot co-packing facility will be in a building which housed the community’s original automobile dealership. She says the choice of a downtown location – not far from the restaurant – was a given.

“If we had just built a building on the outside of town, we would have been up and running within a few months,” Mills explains. “Instead, we’re doing it the long, hard way and we have essentially rebuilt a building. It was important to us to restore an existing building on Walnut Street and be part of downtown Murphysboro.”

Mills, like Green and Guthman, is committed to her community.

“Our whole goal has always been to shine a little light on this community and southern Illinois,” Mills adds. “We know we have to involve ourselves and reinvest in downtown because if we don’t, the downtown won’t be here. It’s as simple as that. If you don’t invest in your people, your community and spend money locally, none of this will be here anymore.”

Experts say beautification and improvement efforts like those happening in Murphysboro are vital to the future of communities. Lyn Falk, president of RetailWorks, a Milwaukee-based design, branding and community revitalization consulting firm, says even the simplest of improvements can make a difference.

“It’s amazing how just cleaning up an area or fixing up places that are faded or torn in the visuals of a downtown can make a huge difference,” she says. “We need to build an infrastructure and then we want to make the downtown attractive for residents and visitors and to lure in other businesses.”

In Murphysboro, those efforts began with planters installed by Murphysboro Main Street.

“Now that we have done those, it’s been a bit of motivation for business owners downtown who feel like they need to be proud of how the outside of their business looks,” Green says.

Falk says civic leaders need to constantly be aware of how their communities look.

“Very few cities can rest on their laurels and maintain or sustain viable community life. It’s hard to stay static and still be successful. Even those places that are not going through a revitalization effort need to look at what they are currently doing and ask themselves if it is enough to move forward over the next five years,” she says.

She adds that the efforts of just a few people can make a huge difference in a community.

“It’s sort of like a snowball going downhill,” she suggests. “If you want something to start happening, someone has to step up and start making a change. Then others notice and take action, too.”

“I think sometimes people get overwhelmed, thinking they can’t make a difference,” Guthman adds. “What I’ve learned is that if you are waiting for somebody else or the city, it might not happen. You have to actually start things on your own from a grassroots effort and then others will side with you. You just have to start doing it and making waves. Once people start seeing other people actually doing things and seeing a difference being made, that’s when you gain their support.”

The overall goal of any revitalization undertaking, Falk says, is to create a place where people want to go and gather.

“When people see other people downtown, when there’s thriving auto and pedestrian traffic, when lights are on and there are very few vacant storefronts, there is a sense of vitality and people are attracted to it,” Falk explains.

Guthman says Falk is correct – a healthy downtown is a matter of perception.

“We have to change people’s perspective,” she says. “If people begin taking pride and show that they want to live where they live, then it becomes contagious. We have to have enthusiasm for where we live, whether it is Murphysboro or any other town across the state.”

The enthusiasm in her community is growing, as is the business sector. Green reports that dozens of new ventures have started over recent years. A new hotel is planned for the community and a variety of specialty stores, coffee shops and eateries are in the works. She believes the future is bright.

“I think Murphysboro is going to be a completely different town in five years. We’re going to keep on welcoming people and revitalizing one step at a time.” 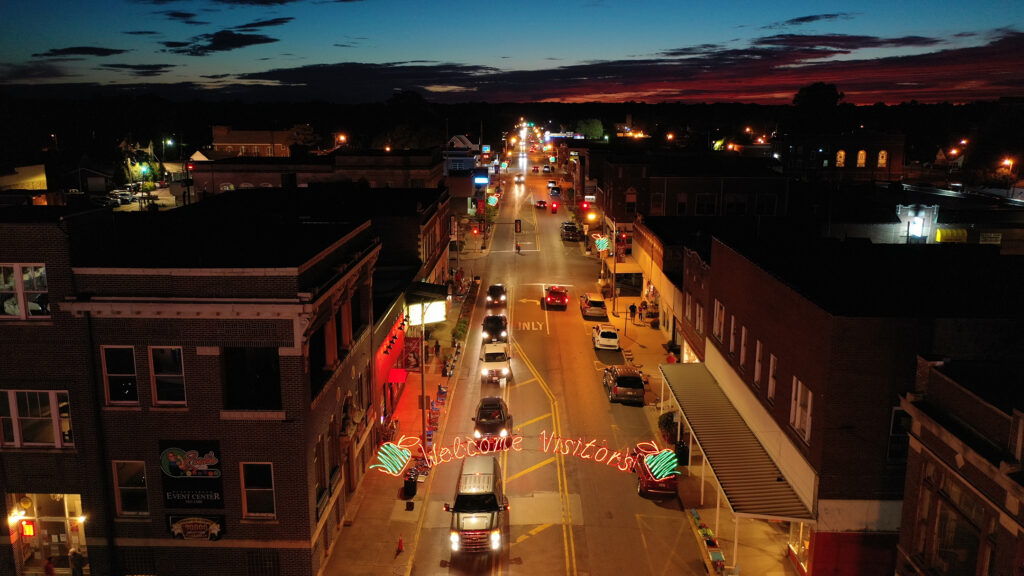