As legend goes, Pepita, a poor Mexican girl had no present to give to the baby Jesus at Christmas Eve services. She was sad not knowing what she could give. Her cousin Pedro tried to cheer her up telling her he was sure even the smallest gift, given by someone who loves him, would make Jesus happy.

Pepita picked a small handful of weeds growing by the side of the road and made them into a bouquet. As she knelt down before the nativity scene, the bouquet burst into bright red flowers. Everyone who saw believed they had witnessed a miracle. Since then, the bright red flowers have been known as Flores de Noche Buena or Flowers of the Holy Night. The flower and leaves of the plant are thought to be a symbol of the star of Bethlehem, which led the Wise Men to Jesus.

While many homes are adorned with sparkling lights and the fragrance of evergreen trees, poinsettias are also synonymous with the holidays. Since the early 1900s, churches, businesses and homes have displayed these colorful plants.

Poinsettias were first introduced to the United States around 1827 by Joel Roberts Poinsett, the first U.S. ambassador to Mexico – hence the name poinsettia. 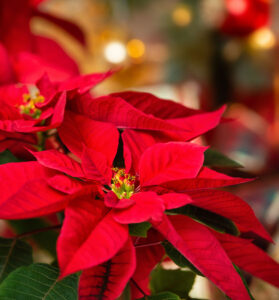 They didn’t become traditional decorations until almost a century later.

Today, poinsettias are the top-selling potted flowering plant in the United States, exceeding $256 million in sales, according to the U.S. Department of Agriculture. During the six-week season around Thanksgiving and Christmas, more than 25 million poinsettias are sold. While the color red may come to mind, varieties include a nearly limitless array of colors including pink, purple, white, yellow, bright green and tri-color.

N.G. Heimos Greenhouses in Millstadt, the parent company of Millstadt Young Plants, has grown the popular plants since the mid-1950s.

What began in 1951 as a small produce stand in St. Louis, run by Norwin Heimos and wife Shirley, has become a large company with offshoots including greenhouses at Eddie and Park in Sunset Hills, Mo., and Millstadt Young Plants and Millstadt Greenhouse in Millstadt. The company also has Micky’s Minis, which provides miniature 2-inch plants, often seen in grocery stores or in direct home delivery through 1-800-FLOWERS.

Norwin Heimos began his first greenhouse in 1952 in St. Louis, growing geraniums and poinsettias. After expanding into two acres of greenhouses at that location, he purchased the Sunset Hills site in 1974 and added floral mums, followed by spring annuals and perennials.

The Heimos brand expanded into Illinois in the mid-80s after purchasing a small greenhouse and five acres from Bob Warner in Millstadt. That location now encompasses 56 acres including 1.5 million square feet of greenhouse space. 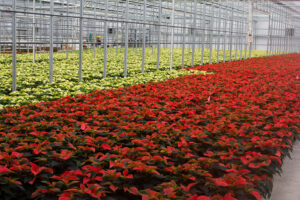 Millstadt Young Plants propagates thousands of plants from hundreds of species including annuals, perennials, succulents, tropicals, herbs and vegetables. It is also a rooting station for Dummen (a breeding company) along with Selecta, Syngenta and Sakata. The company roots all the genetics for those groups. Dummen Group is one of the world’s leading young plants producers in poinsettia research and production.

One of only three in the U.S., Millstadt became the Midwest rooting station for Fischer USA in 2001 and for The Flower Field Group in 2003.

One hundred percent of Millstadt Young Plants are sold to growers. Even Millstadt Gardens, one of the companies under the N.G. Heimos Greenhouse brand, places orders. 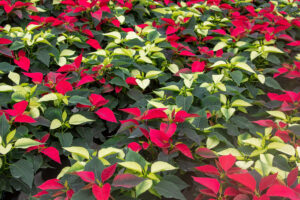 “It’s the only way to make it fair,” explains daughter Amy Heimos Morris. “We pull everyone’s order, assemble and deliver it to their location. We bulk pull everything because we don’t want our other customers thinking we give our own retailer better [plants] than what we give them. We want everyone to get the good stuff.”

The only difference is when there are leftovers or over-bloomed items. Those are sent to Millstadt Gardens to give them an opportunity to be sold instead of discarded.

Poinsettias are one of their biggest sellers.

According to Morris, one of nine siblings (six involved in the business), Millstadt Young Plants propagates millions of poinsettias each year – around 45 varieties on the Heimos side alone. Add the plants for other U.S. growers and it more than doubles to 3-4 million plants grown annually.

With poinsettias, it revolves around timing. Poinsettias, like garden mums, bloom in a certain number of weeks. “We try our best to get ones that bloom early to come on early,” she says. “Our middle crop naturally blooms in growth weeks 47 and 48 and the later ones in weeks 49-50. But if we like stuff that does bloom early, we’ll black cloth it or light it to get it to hit when we want it to.” 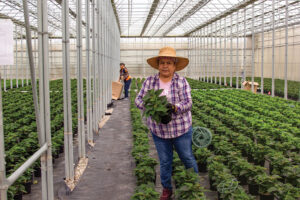 Like a well-oiled machine, a group of 60 H2A employees annually provides the necessary hands-on labor to take the plants from cuttings to fully grown plants. Morris says the workers are there for 10 months, from February thru November, but she would keep them year-round if federal law allowed.

In early October, the greenhouse floors are covered with pots of poinsettias in various stages of development. The larger 10-inch pots usually contain four plants, which gives them the fullness we recognize. Workers are moving plants closer together to make room for more and, having run out of floor space, are hanging smaller pots from the metal rafters of the greenhouses. 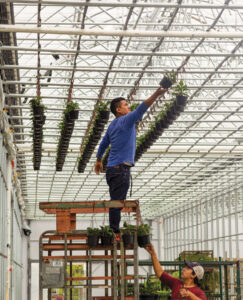 Rolls of black cloth are visible on the greenhouse ceilings and a portion of plants get covered every night to manipulate their bloom. A variety of drip hoses keep the plants at the right saturation level.

Mechanical sprayers run the length of each section of plants to provide the calcium and other nutrients, or insecticides, poinsettias require. In October, they are spraying the plants with calcium which is absorbed by the leaves and stems and strengthens the plant.

Red is by far the most popular color accounting for 70 percent of sales. On the growing floor are red varieties and Norwin Orange, named for Morris’ father who discovered it. They also pot a popular bi-color red/white mix and grow variegated varieties such as Ice Crystal, which is mottled with pink, white and red, and Jingle Bells – red with white or pink speckles.

“When you grow a poinsettia, sometimes you get a rogue color,” says Morris. “My dad discovered a pink variety in the middle of red plants. The breeder had us ship it to them and started taking cuttings from it. That’s how new varieties happen. Dad discovered several over the years.” 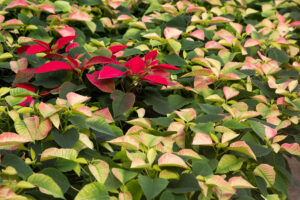 Wholesalers place their orders for the plants early each year. Several different tractor trailer/freight companies move the product. Morris says the lack of drivers is currently tricky. “Distribution has almost doubled because of COVID-19, but we’ve always been able to get drivers.” When weather is either too hot or cold, they rely on refrigerated or heated trucks to deliver them – as far north as Wisconsin, south to Kentucky and Texas and west to Colorado. 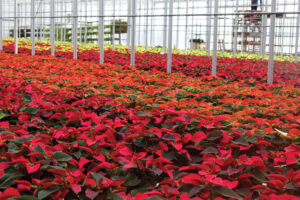 Each year during the week before Thanksgiving, Millstadt Young Plants showcases its poinsettia trials. The 2021 comparison trial feature poinsettias from seven different breeders. Industry individuals – breeders, gardeners, growers, brokers and vendors – visit to get a view of the plants and attend classes on disease, insects, water and soil management.

The cuttings for the trials are given to Millstadt, which doesn’t pay for them directly but bears the expense of growing them. This year, they have 176 varieties of the plants and there are hundreds more.

According to Morris, “the trials can be, well, a trial! Each cutting-edge cultivar has its challenges. These are all the newest poinsettias and are 2-4 years from hitting the market.”

On the Sunday after the trials, the business hosts an open house for family and friends. The Optimist Club of Millstadt helps to staff it and receives all profits. Attendees enjoy tours, local entertainment, snacks and can purchase the trial plants. It’s a big fundraiser for that organization.

“Two years ago, they made more than $10,000,” says Morris. “Last year, due to COVID-19, we had to cancel our event but donated that same amount to them. They count on that money to help the kids here in Millstadt and we were happy to do it.”

Millstadt Young Plants provides poinsettias to a wide variety of florists, grocery stores and retailers across the Midwest. The plant you buy could be supporting two businesses – your local business and its Illinois supplier.

Caring for a poinsettia 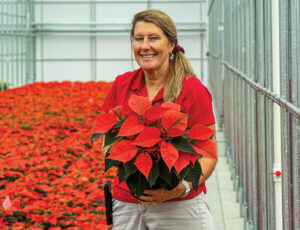 Amy Morris says to keep your plant evenly moist and away from a drafty vent or cold window. It doesn’t need direct sunlight and will flourish in a well-lit office.

She explains that keeping a plant healthy past the holidays can be tricky. “There are people who can do it and others that just can’t,” she says. “I’m one of those that will keep it alive until Christmas and then let it die on its own.”

She fields multiple calls each year from those wanting to know how to get a poinsettia to rebloom. She says to put it in a closet for 12 hours every day for 8 weeks and don’t forget it. Most people forget it and it dies. She also suggests using a room that no one goes into at night. “My mom used to keep one in an old room with windows that no one ever went into. If she needed something a quick flick of the light switch didn’t harm it.”

After 8 weeks, bring the plant back out and let it grow.