Whether pitching a tent in your own backyard, at a local campground or hauling a fifth-wheel camper hundreds of miles, both are done with one idea in mind – rest and relaxation. The need to get away from the demands of a fast-paced lifestyle and kick back while reconnecting with family and friends compels more than 38 million people to hit the road each year in search of that perfect retreat.

Camping opens up the world of the great outdoors and offers enthusiasts the opportunity to live a simpler life, waking up to the sounds of nature and falling asleep to the stars. Many participants have been camping since childhood when parents or grandparents first took them along for the fun. Such is the case with cooperative employees Chris Reynolds, Tim Frick and Laura Dotson.

Reynolds, Coordinator of Web Services/Graphic Designer for the Association of Illinois Electric Cooperatives, says his first experiences camping came as an infant on his grandparent’s land on Glenn Shoals Lake in Hillsboro. His earliest memories include fishing, boating and sitting around a campfire.

The majority of the time Reynolds uses a camper, but when he was younger he would invite friends out and they would pitch a tent close to the water or go out in the timber. “Most of my childhood consisted of water skiing, potato guns and things like that I could do out there,” explains Reynolds. “We even had a go-cart we ran around on.”

“Camping has been such a big part of my summers for most of my life,” Reynolds says. “It’s spending time with family. That’s really what it’s all about with me, the ground itself is almost part of the family.” 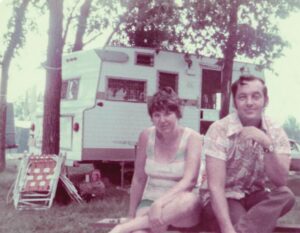 His grandmother Barb Denton, and her late husband Bud, started camping while in their twenties and took their children with them. They owned everything from a pickup topper to pull-behind campers and finally a motor home. They decided to buy a permanent place when they had increasing trouble getting reservations at their favorite campgrounds.

After hearing about a lake being formed in the Hillsboro area, they decided to buy an acre to camp on, but ended up with 11 acres. According to Grandma Barb, as she likes to be called, they thought about possibly opening a campground when they retired. They left everything as natural as possible, although they did install in-ground electrical line and water.

Her family spent a great deal of time out at the lake. “I raised my girls out there. Actually, I raised about half the town’s girls out there,” she chuckles.

After her husband passed away, she sold their motor home and built a small log cabin on the land. Her children, grandchildren and great grandchildren all regularly take advantage of the peaceful spot. It’s not all fun and games though, there’s a lot of upkeep on 11 acres including mowing and the annual spring and fall clean-up of leaves and fallen branches.

With the exception of when Reynolds was younger, he and his family have always used a camper.

Chris, along with his wife Whitney, and two girls Avery and Ella, camp almost every weekend during the summer. The majority of the time they are out at the lake. Almost every weekend after Reynolds gets home from work, he hooks up their camper and his family heads out to the lake until Sunday evening.

Every year the Reynolds family vacations involve camping, and several times each summer they go to Lithia Springs in Shelbyville. “The fun behind that is it’s a different experience. It’s almost like in the movies when everybody in a neighborhood knows each other and say hello. Everybody’s polite. It’s an interesting dynamic, not like staying in a hotel and you never say anything to anybody. At a campground, everyone instantly has something in common because they all have an investment in their equipment. You can always talk about your camper.

“The camping community is really great,” he continues. “My mom always says, ‘we’re like turtles, we just take our home on our backs wherever we go.’”

Campfires, hiking, canoeing or best of all – nothing to do

The first memories of camping for Tim Frick, Certified Energy Specialist for Eastern Illini Electric Cooperative, were at about the age of 10. His parents had an old popup camper they would take on family vacations.

After Frick married, he and his wife bought a small popup camper with just two beds and no cooking capabilities. It was so small they could pull it with his Camaro Z28. His kids grew up with that camper until they eventually traded up to a much larger popup which was more convenient for the family. Five years ago, he and his wife bought a fifth-wheel trailer. “It’s not like bringing home with you, but it’s pretty darn close,” Frick says. “Fortunately, or unfortunately, depending on how you look at it, we had to buy a bigger truck to pull it!”

According to Frick, he would go back to a popup any day just because it is easier to maneuver and doesn’t cut his gas mileage in half when he pulls it. But he loves camping.

“I just love to get away from everything,” he explains. “We seldom go camping by ourselves, it’s usually with friends. We don’t usually go that far away. Often we go over to Kickapoo State Park, which is probably our favorite spot. I look forward, more than anything, to sitting around the campfire of an evening and talking and telling stories. Most of the stories we’ve heard before, but it’s fun to reminisce with friends.”

He and his wife will often take advantage of hiking trails and canoeing or tubing down a river, if those activities are available. “It’s hard telling what we might do, but I’m perfectly happy if there’s nothing to do. I don’t have a bit of a problem with reading the paper or listening to a ballgame,” says Frick. “It seems like if you are at home, there’s always something you feel like you ought to be doing. When you’re camping, you don’t worry about it. Of an evening, we typically have dinner and get a fire built, as the sun is going down, and everyone brings their lawn chairs out and we sit around the fire and visit.”

Frick also farms, so you won’t find him camping until after the crops are in the ground. They usually wrap up camping for the year with a traditional trip on Columbus Day weekend with several friends. For almost 40 years, a group of 10-12 families would go down to McCormick’s Creek near Bloomington, Ind. for the long weekend. They had a tradition of burying a time capsule and each year would go out in the woods, dig it up, take photos of those present that particular year, write notes about the past year and bury it again. Sadly, about five years ago, when the group dwindled to three or four families, they stopped doing it.

The Frick family still vacations together. Both daughters and their families have tents they bring along, although two or three grandkids usually end up sleeping in the camper. He’s found the majority of people at campgrounds are a mix of young and old, but Frick says you can usually guess how old they are by the kind of equipment people have. The older folks tend to be able to afford a nicer camper while the younger ones often have tents.

“You don’t see many people in their seventies camping – most are younger,” Frick says. “It’s been such a big part of our lives, I hate to think about the day when we stop.”

Leave the video games at home

Laura Dotson, Manager of Communications for Adams Electric Cooperative in Camp Point, recalls first camping when, as a child, her grandparents would take her with them each year to a gas engine show held at Argyle Lake State Park in rural Colchester.

Once she got married, Dotson and her husband would tent camp. They started out with a very small tent, which worked well when it was cold enough to frost. It helped keep the heat inside on those cold nights. They moved up to a larger tent which was much better for allowing air circulation on those hot summer days; eventually graduating up to a camper.

“When we tent camped, my husband and I would use primitive sites, which was fine for us. But there are so many other things you have to take with you,” explains Dotson. “The nice thing about the camper is that pretty much everything is there and ready when we want to go. I even have camping clothes I keep in the camper. When we tent camped, I had a long checklist of items to take, but now with the camper I have a shorter list and it’s easier. I plan meals that are different than what we usually eat, and we build a fire and take a small grill. I enjoy cooking outside.”

Dotson loves being able to relax with family and not having to worry about the chores sitting at home. Her husband and two kids enjoy nature too, and often take their bikes along on the trip or spend time fishing, hiking or playing with remote-control vehicles. Dotson loves crafting and will take that along with her. Sometimes she will plan a craft her children will enjoy.

Whether by themselves, or with friends, they just enjoy spending time outdoors. “It’s just so relaxing,” she says. “We leave the video games and stuff at home and just enjoy being together as a family.”

Try it before you buy it

Not sure if camping is for you? Before you buy, consider borrowing a tent or renting a camper before sinking a lot of money into the equipment. This will allow you to “test drive” the experience. You might even want to consider renting a cabin, many campgrounds have them available.

Do some homework first. Consider the type of campground and amenities you want. Some campgrounds have hiking trails, swimming pools, fishing, etc. Do you want electricity and water? What about showers? These are all considerations you should make before making a reservation.

Whatever you decide, as the Illinois Campground Association materials say, “It’s a million miles from Monday.”

Whether you prefer to rough it in a primitive campsite in a national forest, or find a campground with multiple activities, there is an abundance of information available on the Internet.

For a listing of private Illinois campgrounds, amenities and reservation information, go to
www.IllinoisGoCamping.com.

If searching for something outside Illinois, try www.gocampingamerica.com.

Information on national parks and facilities can be found at www.Recreation.gov or by calling 877-444-6777.

Before you leave home:

2. In case of emergency, be sure to tell someone at home where you are going and when you’ll return.

3. Know basic first aid and take a first aid kit with you. You can find a listing of the basics that should be included in a first aid kit on the American Red Cross website at www.redcross.org or complete kits can be purchased at most pharmacies or department stores.

4. Have the proper clothing and equipment for any weather you may encounter.

5. Make sure you have access to clean tap water. If you aren’t sure, take bottled water.

6. Take the time to make sure your vehicle is road ready.

If you like the great outdoors but camping isn’t for you, consider glamping.

Glamping is luxury camping that gets you away from the busyness of life, but in a more glamorous camping style. The accommodations allow you to experience nature in your own private secluded tree house, yurt, cave, luxury tent, etc. It’s the opportunity to sleep in a one-of-a-kind setting without sacrificing comfort.

You can find glamping sites with access to activities such as mountain biking, hiking trails, rafting or wine tasting. To learn more go to www.glampinghub.com.