A new perspective on life

Lineman shares his story of perseverance 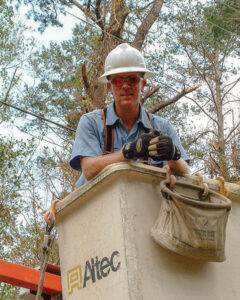 It was a hot, humid July day in 2015. As usual, Gerry and Denice Kinney reported for work at Wayne-White Counties Electric Cooperative (WWCEC). Gerry was a lineman, and Denice worked in the records department. Around 10 a.m., Denice received a call from a friend who told her a lineman had been injured.

Her heart sank. She soon learned the injured lineman was Gerry.

“It was supposed to be an easy day,” Gerry recalls. He was in the bucket truck working with his crew to put up a neutral line that had been knocked down during a storm. “I was making a motion to tie in… a finger in the air in a circular motion.”

Gerry didn’t realize his bucket was higher than it should have been. He remembers two occasions when he boomed the bucket up: once for a passing car and once to help his visibility. When he made that motion to tie in, his right index finger brushed the 7,200-volt power line.

Electricity entered his right hand, traveled through his chest and exited his left hand. The incident happened so fast it didn’t blink the system. Gerry himself didn’t know what had happened.

“Honestly, it probably took me 30 to 45 seconds to realize I got into a wire,” he remembers. “I reached down to move my bucket, and I couldn’t figure out why my hand wasn’t working… I couldn’t make it do anything.”

So, he pulled his hand off the controller and tried his other hand. It wouldn’t work either. That’s when he saw his skin peeking between his long-sleeved shirt and gloves. It was a beet red, brownish color. That’s when he understood what happened. Then the pain set in.

“The pain came down my arms and was horrendous,” he recalls. “I remember I was screaming at the top of my lungs for them to get me down, and they said when they got me to the ground, I was just barely whispering.”

Gerry was told it didn’t take long for the three men in his crew to realize something was wrong. They lowered the bucket, got Gerry out and called for help.

“All three of them guys that day… I can’t imagine the panic and stress they were under,” Gerry says. “But they did everything right.”

Fortunately for Gerry, the co-op provided the Air Evac helicopter with exact coordinates of his location, and the chopper was already warmed up for an event that day when the call came in.

“I don’t know how many minutes that saved, but in a situation like this, minutes mean a lot.” Gerry says. “If the minutes didn’t save my life, it probably saved inches or lengths of my arms.”

He was flown to Mercy Hospital in St. Louis and, despite his pain and injuries, stayed conscious the entire flight. He credits that to the anger he felt.

“I could not believe that I allowed that accident to happen. I was just mad,” he says. “How in the world could I do something so simple and have this kind of accident? I’m not going to lie, I think about it today.”

During the flight, he thought about Denice. “My wife is going to kill me,” Gerry said to the flight nurse because they were going on a 10-day vacation the next day. The months ahead were far from a vacation for the Kinneys. 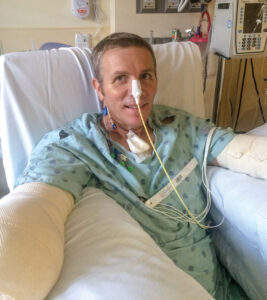 Before seeing Gerry for the first time, Denice knew what would happen. “I knew he was going to lose his hands, so I was mentally preparing myself, but when I saw they were black, I knew for sure,” she says. “Of course, you’re always hopeful they can save them.”

Three days later, doctors handed Denice a consent form to authorize the removal of her husband’s hands. “That’s the toughest thing I’ve ever done,” Denice says. “But it was either that or he was going to die.”

Gerry spent five weeks in the burn unit at Mercy and underwent eight surgeries. “All three surgeons that worked on me said they had no idea how I survived,” he recalls. “They had never seen injuries like that because [patients with those injuries] never make it there. That’s a sign I’m pretty blessed.”

After his surgeries, Gerry spent two more weeks in rehab. He wasn’t released to go home until he could get himself off the floor without assistance. “That’s hard to do without hands,” Gerry says. “What you’ve got left is tender and bandaged up to the hilt, and so for two weeks it was pretty miserable.”

He went home in September, and Denice took care of him. Her background in animal medicine helped prepare her. She cared for his wounds and kept track of medications – he had 27 at one point. Nine months after his accident, Gerry went off his pain medications, and nine months after that, he stopped his nerve meds. “I’ve not taken any since, and I don’t ever plan on it,” he says.

“He was a good patient,” Denice says. “He never complained. For husband and wife to be able to survive that, there’s a bit to say there, especially about him.”

“I don’t believe I would be in the position I’m in if it wasn’t for my wife,” Gerry says. “She’s never complained. You can imagine what she had to do for me. She just did it, didn’t say a word about it and kept going.”

In January 2016, he was healed enough to be fitted for prosthetic arms, and today he has two different kinds. One is body powered and the other is battery-operated.

The body powered is operated with a harness that goes around his shoulders, and Gerry rolls his shoulders to operate his hooks. The battery-operated hands aren’t as physically demanding. His arm fits into a socket, and a sensor inside will detect muscle movement and will open and close on demand.

“I still feel like I have my hands,” Gerry demonstrates. “If you tell me to move my forefinger, I use the muscle that used to operate my forefinger… when I rotate my hands, I think in my mind that I am bending my wrist to the right.”

Gerry has three different hand attachments to go with the battery-operated prostheses, and he can select different grip patterns with a push of a button. Gerry admits it takes a lot of practice. For example, if he’s in a hurry to shake someone’s hand, his hand may rotate instead. 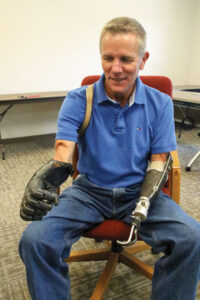 “I’m considered a high user,” Gerry explains. “I can’t tell you how many hands I’ve broken.” He’s broken at least eight fingers, both wrists and one set of hands. “It doesn’t hurt to break a finger. All I do is pop my hand off, send it off and they put a new finger on there. I don’t have to wear a splint while it’s getting repaired.”

While grateful for his prostheses, he admits their weight can get tiring. “When I get in the house for the evening, I can’t wait to take my arms off,” Gerry says. “It’s like getting home and taking off a pair of shoes.”

At home, he has learned to do most everyday tasks without his hands. He has devices that slip over his stub, so he can feed himself or brush his teeth. Denice puts food in special bowls, so he can easily pop the lids off. Gerry describes his bathroom as a carwash for himself. It is equipped with three shower heads, strategically placed sponges and a full body dryer.

It was hard for Denice to watch and allow him to struggle, but they both knew it was the only way he could learn to be independent.

“You can’t be afraid to learn a new way,” Gerry says. “I get frustrated, and I’m not above having a fit. I don’t let that frustration get me to the level that I quit… I might lose the battle for that day, but I’m not going to lose the war.”

At the same time, he isn’t afraid to ask for help. “Believe me, there’s a lot of awesome people in this world,” he says. “You cannot believe the generosity and help I’ve received since my accident.”

After the accident, the Kinneys received much support from family, friends, community members and strangers, but their electric cooperative and employer WWCEC helped in a big way.

“Denice and I will never ever be able to thank them enough,” Gerry says. “They went way above and beyond. I don’t know how they could have done any more.”

While Gerry was in the hospital, WWCEC sent two or three co-op employees on company time almost every day to be with the Kinneys. Every morning before his surgeries, the staff would gather in prayer. When they returned home, fellow employees brought out supper every night for six weeks. Denice was even allowed to work from home, so she wouldn’t have to take time off to care for Gerry.

Because of all the help he’s received, Gerry has gained his independence back.

“He is so versatile and fluent with his prosthetic arms,” Denice says. “I live with him and sometimes I forget he doesn’t have hands because he does everything like he always did. It might take him longer or he might do it a different way, but he does what he wants to do.” 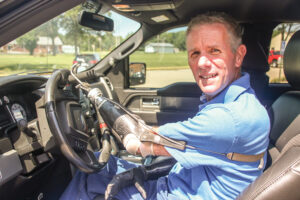 For example, with his prosthetic hands and a special attachment on his steering wheel, he’s able to drive again.

He still feels his hands. “They always feel like they’re burning. That never goes away,” he explains. “It feels like a chemical burn. The only time I notice that they’re not hurting is when I’m busy.” So, Gerry stays busy.

He speaks at many events and goes to schools to talk to children. “I love kids. They will ask you anything,” Gerry says. Kids ask the obvious questions. Can you write? Can you feed yourself? How do you go to the bathroom?

“One kid put his hand up and asked, ‘What does it feel like to be a superhero?’” Gerry remembers. He replied that he didn’t feel like a superhero. “Then the same kid asked, ‘If you were going to become a superhero, what would you call yourself?’ I’ve been called everything from a pirate to a cyborg to a superhero.”

Occasionally, Gerry will do studies for different prostheses, and he’s enjoyed every minute of it. “You get to play with the new stuff,” he says. 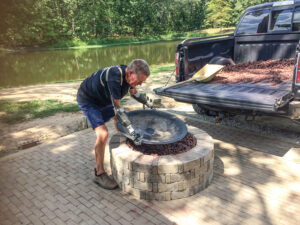 Gerry explains that he will always have a project at home. He mows the lawn, trims shrubs and power washes buildings. Last summer, he laid more than 1,700 bricks for a patio and built a 120-stone fire pit to go with it. He’s been working on updating an old barn and has installed all the wiring.

Last September, Gerry and Denice finally went on that vacation they planned before the accident. They rode four wheelers at the Hatfield-McCoy Trails in West Virginia, and they plan to do it again.

Gerry also started to help with the lineman’s program at Frontier Community College in Fairfield where the co-op now sponsors a full ride scholarship every year in Gerry’s name.

“I loved my job. I miss linework terribly, and I loved all the people I worked with,” Gerry says. “But on July 16, 2015, that path ended abruptly. That day, I started down a new path. At times, I thought that path was impassable, but now I’m optimistic about the one I’m on. I’ve gotten to do and see things I never would have otherwise… To me, every day is a new day with the simple fact that I wonder what each day will hold.” 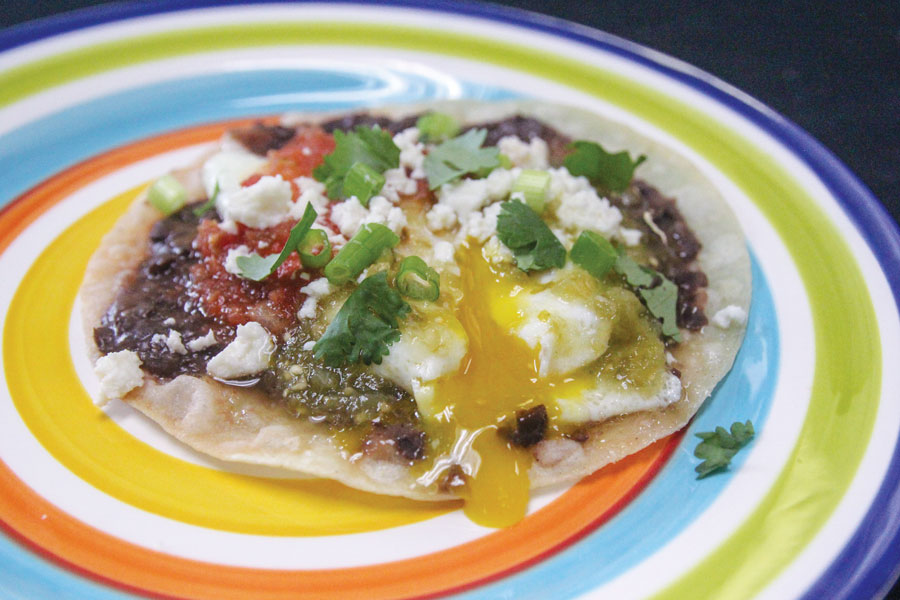