A recipe for success 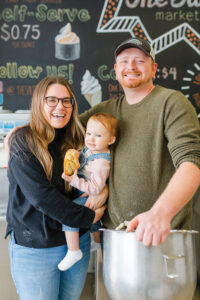 At age 8, Emily Lewis created her first business plan. She hoped to open a bakery, an eatery that serves breakfast all day and an ice cream shop. Years later, all three dreams became a reality.

“Something I love about food is the fact that it’s about community,” Emily says. “It’s how you form relationships. How you get to know each other is through food. That’s how you get to people’s hearts, to make them feel better and bring them comfort.”

Emily’s baking journey began at age 15 with her first job at a small bakery in Elkhart. She worked there until she graduated from high school and discovered she wanted to learn how to bake completely from scratch.

“I tell people I’m homeschooled,” Emily laughs. Actually, she’s self-taught. After meeting her now husband Tim at 18, they decided to forgo the classic dinner and movie for date night. Instead, they stayed home and learned how to bake. “We couldn’t afford to take classes at the local college, so we started baking together to learn what it means to bake something from start to finish and discover where our food comes from.”

They started going to the farmers market and connected with local vendors and farmers. They began experimenting with farm fresh eggs and milk to see if there was a notable difference and discovered a significant improvement.

From there, Emily decided she wanted to bake for a living. Tim encouraged her to take the leap and start her own bakery. Three Twigs Bakery launched as a stand at the farmers market, and the following year collaborated with a coffee shop in downtown Springfield to utilize its kitchen space. In January 2019, Three Twigs opened its first brick-and-mortar bakery.

Following the bakery’s success, Emily opened her breakfast restaurant in May 2020, named Biscuits and Brunch. They soon took over the vacant frozen yogurt shop next door and opened The Salted Lemon Market and Creamery.

Through it all, Emily has focused on finding quality ingredients from local Illinois farmers and businesses.

Having grown up on a dairy farm, Emily learned the importance of knowing where food comes from and how it is grown or raised. She remembers seeing her family struggle at times because corporations around them were able to cut corners, produce cheaper and lower costs. Going into her own business, she took this to heart.

In Three Twigs’ early stages, Emily started working with Doug Rinkenberger of Garden Gate Farm outside of Fairbury, which is on Eastern Illini Electric Cooperative lines. “Connecting with him was the best thing I think our business could have done because he introduced us to farmers we had never even heard of,” Emily explains.

Doug has a network of farmers that allows him to pick up products and deliver them to restaurants and residences. “There’s times I deliver products from 10 different farms to one restaurant,” he says.

In a course of a year, Doug works with more than 30 farms and delivers their products as far north as Chicago and south to St. Louis. “It is basically a cooperative … that’s the concept,” he says. “We work together to expand everybody.”

Doug sends out a weekly list of the products available to him and picks up the orders. “Everybody gets credit for what they’re doing even though not everybody can deliver it,” he says. “If you want a pound of honey, I can get you a pound of honey three miles from my farm.” 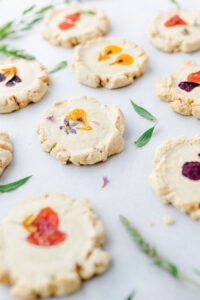 If Emily asks for edible flowers, those likely come from Garden Gate Farm. Doug’s wife is currently expanding her flower garden to meet the demand. If he doesn’t have a product on his farm, he’ll find somebody who does.

Emily says there were times she thought she’d never find a local vendor for something, but he always seems to know somebody and provides it to them. “Doug is an awesome blessing to our community, really,” Emily says.

It was Doug who introduced Emily to Kilgus Farmstead, a meat and dairy farm located just 2 miles from Doug’s farm. Initially, Doug began delivering Kilgus Farmstead’s dairy to Three Twigs for baking and lattes. Then the creamery opened, and Emily needed an ice cream base. She says it was a no brainer to use Kilgus Farmstead dairy for the ice cream as well. Doug made the connection.

“Every single week, Kilgus Farms delivers the products we need,” Emily says. “Whether it’s for ice cream or milkshakes, 100 percent of the dairy is from Kilgus Farmstead.”

As a result of introducing Emily to Kilgus Farmstead, Doug gets free ice cream. “Emily is great to work with. When I deliver, she says, ‘You need to get ice cream.’ I feel kind of bad, but if she insists …” Doug laughs. While he likes the salted lemon ice cream, he says the peach blueberry is his go-to right now.

Three Twigs is one of the last stops on his nearly 600-mile round trip journey for the deliveries south of his farm. Doug says the ice cream helps him stay awake the rest of the way home.

“They are very much about what they’re doing, and they’ve got lots of ideas,” Doug says about Three Twigs. “They’re young, so let them do it.”

These are just a few examples of nearly two dozen local Illinois small businesses and farms Emily partners with. Others include Brian Severson Farms in Dwight, Jefferie’s Orchard in Springfield, Harvest and Blooms Farm in Rochester, and many more.

Almost three years ago, Emily met with the owner of Janie’s Mill, a 5th-generation farm owned by the Wilken family and located in Ashkum, when she was seeking a place to purchase wholesale flour for the bakery. Janie’s Mill sells a variety of cake flours, bread flours and grains, including wheat, rye, buckwheat and more.

Emily was given samples of flour to use, and to this day Janie’s Mill plays a vital role at the bakery. “I tell you what, I have never had better bread than when I use their flour,” she says.

She has discovered there are customers who truly care about where their food comes from and will seek out restaurants or bakeries specifically because they use local farmers, but those who don’t may not realize locally sourced food has better flavor.

“When my husband and I first started, we experimented. We were curious if it made a difference, and it really does,” Emily says. She explains eggs from a local farmer makes cake batter fluffier and richer.

“When it comes to flavors, I’m determined not to be like everyone else,” Emily says. “We want to be a place you can come to that you can’t find anywhere else. A place that you want to keep coming back to see what you’re going to find next. It is like challenging your own taste buds.” 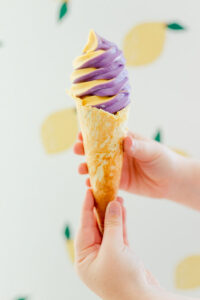 She remembers when the ice cream shop featured a purple sweet potato soft serve and customers were scared to try it, but it ended up a popular flavor. Similarly at the bakery, people were hesitant to try the lemon and rosemary cake, but it is now a staple flavor as a cake and a donut.

“We have taken what people would normally be afraid of and turned it into what has made us grow as quickly as we have been able to,” Emily says. Other staple flavors at the ice cream shop include the salt and pepper caramel and the salted lemon, the ice cream shop’s namesake.

“Salted caramel is pretty normal, but adding pepper gives it a hint of savory on a different level,” Emily says. “Our big staple that we have year-round is our name, salted lemon. It is literally freshly squeezed lemon juice and lemon zest in our ice cream mix, and we add sea salt before we pour it in the machine.”

At the bakery, Emily says customers love anything that includes her candied bacon with chili powder. “Honestly, I could probably sell that candied bacon by the bag full,” Emily laughs. The bacon is mainly featured in her French toast maple bacon dessert, which is a coffee cake with a French toast swirl with pure maple and the candied bacon. This dessert comes in the form of cakes, cupcakes and donuts.

Building a new recipe has become second nature to Emily. When she and Tim first started, it would take about a week to narrow down a recipe to exactly how they liked it. It has gotten a lot easier with practice.

“I know this is what God wants us to do,” Emily says. “My husband and I can determine a flavor and will figure it out within one or two tries. I’m proud we can take something we’ve never done before and have the palate to do it. Not to sound corny, but we have such a chemistry together in the kitchen. It is a science, and between the two of us, we can really figure something out pretty quickly as long as we set our minds to it.”

The gluten-free recipes took more time to figure out. “Those took us literally months,” Emily says. “But once we nailed 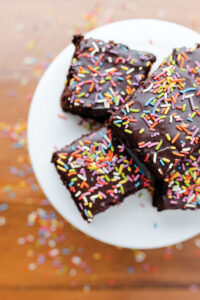 From the beginning, Emily’s goal was to include everyone, and that meant creating gluten-free recipes at the bakery and dairy-free recipes at the ice cream shop. “We want to be a place for everyone,” she explains. “A place where the entire family can come and get a treat, have a good time together and not feel left out of the fun.”

The most recent change for Three Twigs was closing the original location and moving the bakery to a larger space. Three Twigs Bakery and Bistro recently opened, offering the same bakery items as well as light breakfast and lunch options.

“I just feel like we’re living the dream,” Emily says. “Things always change on us, but we’re always going with the flow and figuring it out. We feel like we’re doing what we’re supposed to be doing.”

The Salted Lemon Market and Creamery 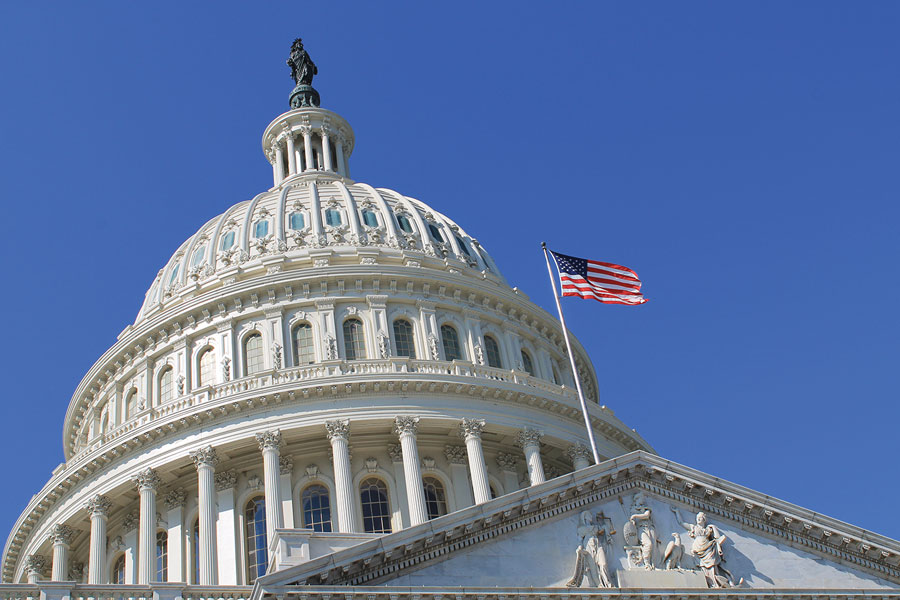