Electric cooperatives are working to make even better use of a powerful source of energy—military veterans.

“Veterans, active military and their spouses are some of our greatest assets as employees,” says Michelle Rostom, director of workforce development for the National Rural Electric Cooperative Association (NRECA). “They are mission-driven. When we think about providing safe, reliable and affordable power, we know our veterans––whatever their job––are focused on making sure we are operating safely, and that we are creating a reliable electric network for co-op members.”

Rostom spends a lot of her time getting more veterans hired by electric co-ops in her role as program manager for NRECA’s initiative called “Serve Our Co-ops; Serve
Our Country.”

The program launched in January 2016 “to honor and employ veterans,” says Rostom.

Since then, the program has been forming a coalition of co-ops and other groups to focus attention on the benefits of hiring veterans, and to actually hire more veterans. 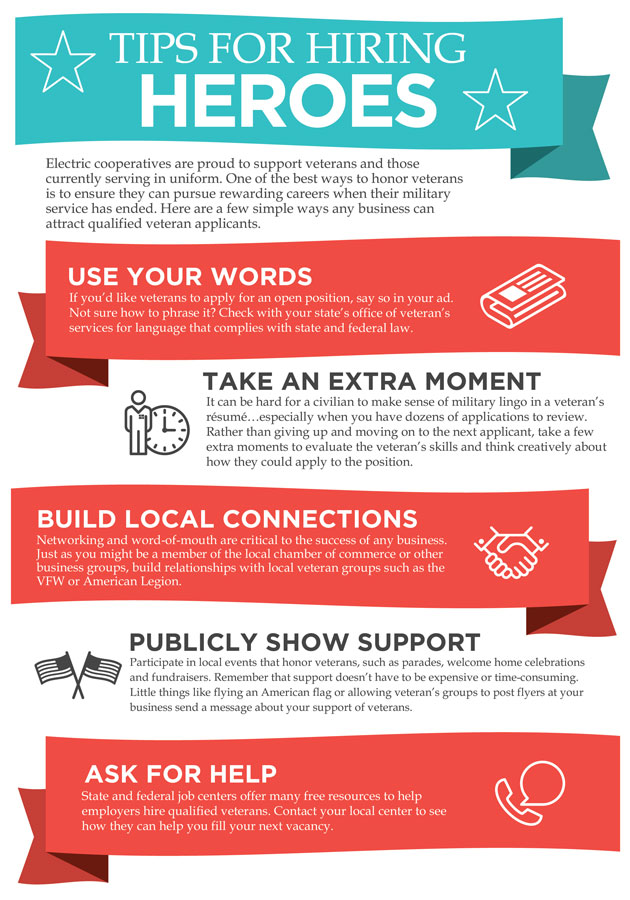 In announcing the program, Jim Matheson, CEO of NRECA, said, “Our military veterans deserve our unending gratitude for their service to our country, on Veterans Day and every day. Veterans possess many of the qualities sought by electric co-ops, including a deep commitment to service and an uncompromising work ethic. More than 200,000 service members transition out of the military to civilian life each year, and we’d like to tap into that talent to help fill the thousands of co-op jobs opening up.”

Hiring veterans is certainly a decent thing to do, but Rostom lists why it makes business sense as well.

“They understand their role and they go out and execute it,” she says. “They bring leadership skills, they work in teams and look out for each other in that kind of ‘brotherhood.’ They work in all types of weather. They are disciplined. They show up on time. Those are professional competencies that not every job applicant brings with them, but you find them in the military.”

The initiative grew out of broader strategic planning by NRECA. That plan envisioned that 25,000 jobs at electric co-ops would need to be filled in the next few years.

“We are racing to make sure we have the right talent applying for our jobs,” says Rostom.

Part of that work has been developing and distributing information to bring attention and advice aimed at connecting veterans with co-op jobs. A series of three checklists published by the program helps guide electric co-ops in setting up a veteran hiring effort. The checklists show co-ops how to recognize veterans, contact groups in their communities for broad-based effectiveness and bring attention to the skills and abilities veterans offer.

Some of those skills and abilities might not be immediately obvious, says Rostom, like what they learn by having to change their job and their residence every few years.
“They are trained to learn,” she says. “They change jobs every couple of years, so they learn to adapt.”

Serve Our Co-ops; Serve Our Country also started a group called “Veterans in Energy,” a professional organization to go beyond hiring, by helping veterans transition into the energy workforce.

“You’ll get resumés for a spouse, and they will have big gaps in their experience,” she says. “They’ve put their career path on hold to follow their spouse around the world with the military, so don’t just discount that resumé.”

Rostom says, “They’ve had to move their family probably 10 times over the past 15 years, so they have to plan, they have to find housing, find schools, medical care––and they’re doing that without their spouse there, who is deployed somewhere. Often, they are volunteering, so they are community-focused, which is what we look for in the co-ops. In working with groups of volunteers, they are managing people, they are probably managing a budget, they are securing vendors for events. There are a lot of skill sets that they bring.”

Rostom continues, “Many are working on a degree while they are moving around the world. They are a phenomenal group of untapped talent we should consider. When you see that resumé, it doesn’t say military spouse, but I think it should. It totally changes the game—it shows the potential employer why their career has been put on hold. They are smart, educated, they are project managers, they work with diverse groups of people. They’re an untapped group of talent that we don’t always think about.”

Through Serve Our Co-ops; Serve Our Country, electric co-ops are better positioned to increase their veteran workforce and support local veteran communities. To learn more about the program, visit www.servevets.coop. 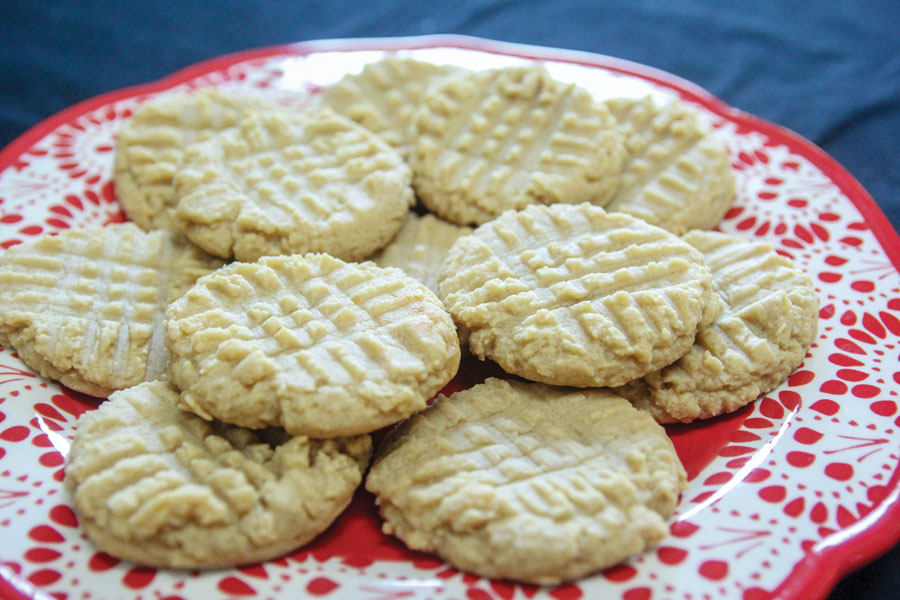 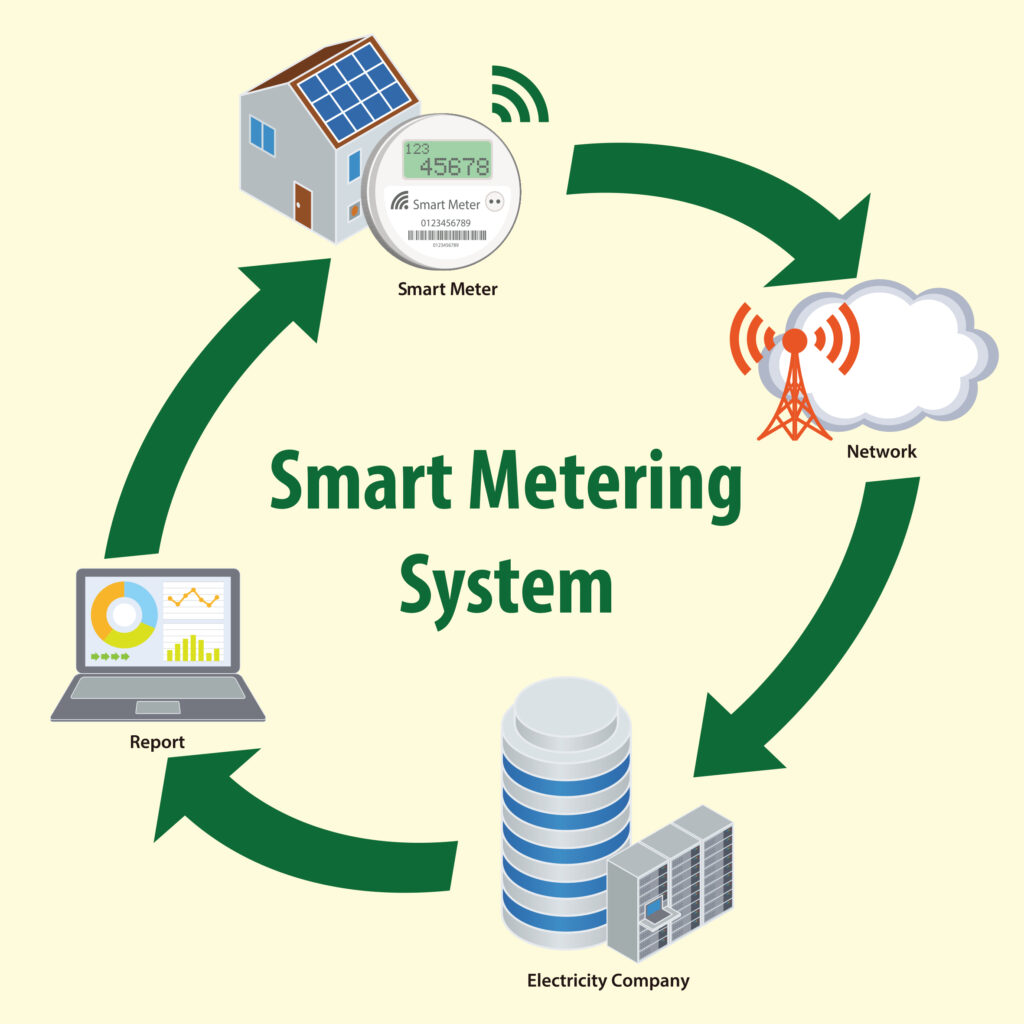 Busting the myths about “smart meters” 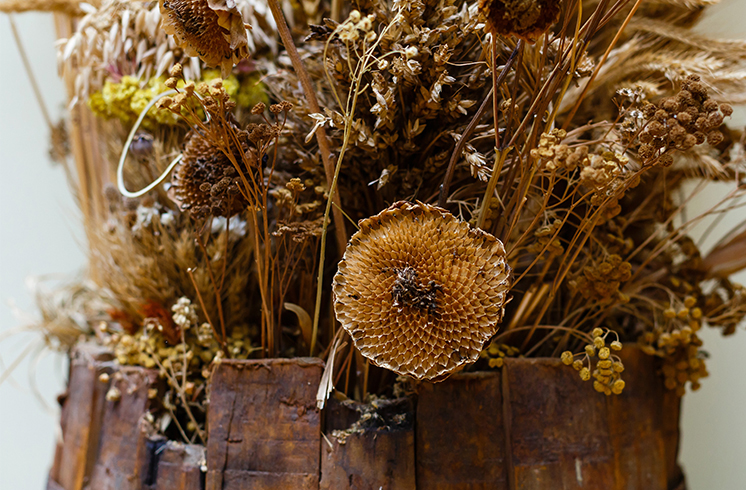