For a new business in Petersburg, history and the future merge in a special way. Broadgauge, a new restaurant on the square, has opened in a historic building once occupied by central Illinois’ largest merchandise and goods store. The team working behind the scenes to make it happen were brought together amid pivotal changes in their personal and professional lives. As they embraced those changes, they found the ultimate direction for the Broadgauge shifting as well.

It’s fitting that their vision expanded, as the name of the enterprise literally means a railroad gauge that is wider than the standard, or “wide in area or scope.” The moniker was the same name used for the dry goods store previously in the building, after being purchased by German banker John Brahm in 1872, who was rumored to have a fascination for railroads.

Douglas had been living in San Francisco, where he developed an apartment finder app. He currently works for Zillow. “[Due to] COVID, he was able to come back home and relocate permanently. He’s always loved this building, and when he returned, decided to purchase [it]. His vision was to create a restaurant/event space — somewhere the whole community could come and gather,” Emily says. “Douglas approached us about a year ago. We had moved to Petersburg as well with our son.

“We experienced a business pivot because of the pandemic. We had very small community seating with eight picnic tables. We had a line out the door every day and pushed random people next to each other and it worked. But we knew we had to change things up and our son was almost 3, so we wanted to move to a smaller town and enjoy a little more time with him. It was a perfect match.”

Corey is the executive chef for the new venture. Prior to Long Nine, he worked as Chef de Cuisine at Augie’s Front Burner, a longtime favorite in downtown Springfield which has since closed. Also on the team, Chef Eric Smith serves featured dishes, including the New Salem sirloin, sea scallops and the Log Cabin chicken, in the evening.

“Dinner service will be more of elegant, fine dining,” Emily says. Due to the overwhelming response they received during opening weekend, reservations are now required.

Talisman, the adjoining coffee shop and bakery, serves coffee and pastries in the morning and lunch midday. The bakery is physically connected to the Broadgauge restaurant through a transitional room named in honor of another former occupant, the Robbins Company. The bakery also has an emotional connection for the Faucons. Emily’s grandparents owned B and Z bakery in Springfield years ago. “That’s always been our inspiration as well, working in this industry, working alongside each other,” she says.

Lunch is counter service. “Everyone can place their orders there. You’ll still have a server come to the table, but we’re allowing people to roam through the building [and] sit where they please. Then at 2 o’clock, lunch will close … [and] at 5 o’clock, the Broadgauge dining room will open,” she says. 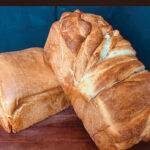 Their breads are made from scratch in-house, and they work with local farmers whenever possible. “The mission of the Broadgauge is to embrace the community and uplift everyone involved. We are trying to make those connections with everyone and … show what Petersburg has to offer. Seasonally, we’ll change things as well. [It’s] comfort food that’s elevated,” Emily says, such as specialty sandwiches like The Judge (charbroiled chicken breast, gruyere cheese, caramelized onions, arugula salad and honey Dijon) and Old World signatures like the 1872 pot roast. 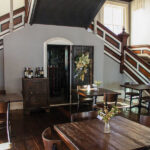 The Broadgauge dining room is a testament to the building’s former glory. “We are working with the Historic Preservation Society. So, the flooring is the same. We reverted back to the original building facade, and the mezzanine that you’re able to see in the dining room is all original. The staircase is original as well,” says Emily. “But … we brought in the countertops, hood vent system, kitchen. We revitalized the ballroom upstairs.”

Event space is another important component of the business, and the ballroom is just one of its spaces. Douglas also purchased the building next door. 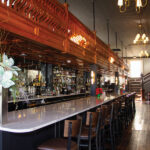 “Originally in 1872, when this was formally known as the Broadgauge, the two buildings were connected by a bridge. Douglas decided he wanted to recreate that. We already have the connecting bridge installed,” Emily says. “This second space will act as another venue that’s bookable, ideally for brides and bridal parties. They’ll be able to make a grand entrance into the ballroom.”

According to Emily, they are still determining what the lower level in the other building will be used for, but the back side of it will be a beer garden. Four additional venue spaces are currently under construction and an elevator has also been installed.

“We’ve had a lot of people reach out about booking weddings, and we’re getting there. We’ve hired an event coordinator. … I’d say middle 2022, we’re going to start taking bookings for weddings and other types of private parties,” says Emily.

An extension of bar hours and live music are also on the horizon.

“I think we’re just trying to embrace everyone and serve the best we can. We’re grateful [for] all the love and support we’ve had from our community. We’re excited to be able to further that and keep serving everyone and just get better and better,” Emily says. 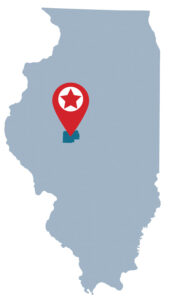