Congress must not lose sight of our core values 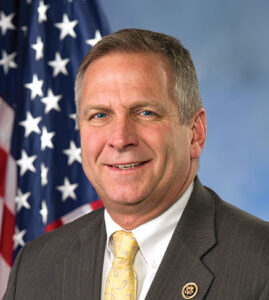 Representative Mike Bost has represented the 12th District of Illinois in the U.S. House of Representatives since 2015. He serves as Chairman of Disability Assistance and Memorial Affairs under House Committee on Veterans’ Affairs.

When you’re in Congress, you learn quickly to keep your head down, do your job, and not get distracted by the political games of Washington. It’s the members who lose touch with their constituents who are the first to go in the next election. That’s why I have worked to advance a pro-growth agenda.

Core to that agenda is the revival and renewal of American ­industry innovation. If America is to ­continue being the global powerhouse of ­commerce and ­manufacturing, it is crucial that we establish a ­globally-competitive environment for ­economic growth. For too long our country has been saddled by a tax code that has driven jobs overseas to countries like China and Mexico.

That changes with the Tax Cuts & Jobs Act, which recently became law. This historic tax reform brings the 35 percent corporate tax rate—­previously the highest in the ­industrialized world—down to 21 percent. It also allows businesses to immediately write off the full cost of new equipment to improve ­operations and enhance the skills of their ­workers – unleashing growth of jobs, ­productivity and paychecks. Important to our Main Street ­entrepreneurs, tax reform protects the ability of small businesses to write off interest on loans, which helps small businesses start or expand, hire ­workers and increase paychecks.

Tax reform won’t only result in higher wages due to economic growth. You’ll also be able to keep more of what you earn in the first place. Tax reform doubles the standard deduction from $6,500 to $13,000 for ­individuals and $12,000 to $24,000 for married couples while also ­lowering rates across the board. The bottom line is that you work hard for your paycheck and you should be able to keep more of it.

I’m also convinced that agriculture will be a big part of any new American ­renaissance; and it’s vitally impor­tant to Illinois’ economy. Our fabled agricultural heritage must be ­protected, and it’s common sense that we should stand behind our farmers and their families.

I’ve heard from farmers and ­ranchers throughout ­southern Illinois who are either just getting on their feet or are ­trying to grow their ­business. They tell me all the time that their cost of doing ­business is ­growing while their ­revenue to reinvest in their business and employees is shrinking. That’s why I introduced the ­bipartisan Beginning Agriculturist Lifetime Employment (BALE) Act to ensure beginning farmers, ranchers and agricultural ­producers have access to credit to expand or diversify their operations.

According to the U.S. Department of Agriculture (USDA), our nation will need 700,000 new agricultural workers over the next 20 years. It’s also estimated that nearly 45 percent of veterans come from rural America. This startling data encouraged me to bring together a bipartisan group of lawmakers on the House Agriculture Committee to introduce the Veterans’ Agricultural Apprenticeship Act. Our legislation instructs the USDA to ­prioritize veterans when ­making apprenticeships available. This common­sense bill kills two birds with one stone by helping our farmers and ranchers fill jobs and expand their operations, while offering our veterans new skills and a potential career path after their service.

As a veteran myself, I am honored to serve as chairman of the House Veterans’ Affairs Subcommittee on Disability Assistance and Memorial Affairs. Having supported military personnel throughout their active service, it is important that we do not neglect them afterwards. That’s why I was privileged to sponsor ­bipar­tisan ­legislation that ­provides for a once-in-a-­generation ­overhaul of the ­veterans’ ­benefits appeals process. Prior to this ­legislation, 400,000 ­veterans’ appeals were backlogged in an outdated ­system just waiting to be processed.

With each passing day, a ­claimant was just another day further from receiving the treatment they deserved. I was proud to see this legislation signed into law in August. Now our veterans will have a modernized appeals process to have their claims addressed more efficiently. Congress cannot lose sight of the promises and obligations made to veterans and their families, and we must work together to protect those who have protected us.

Too often, politicians lose sight of the core values that drive our mission in Congress. I am driven every day by a promise to fight for our ­southern Illinois values in Washington. Then I look forward to returning to my district each week, talking with ­constituents and making sure my work has measured up.

Internet is down!
Do radiant barriers really make a difference?
Recognize the best in Illinois.
Evandy’s Boatel
Help during the most stressful time of life
Powering up after a winter storm
Orchids: An outstanding indoor plant
A personal journey into heart disease
What’s Hot?