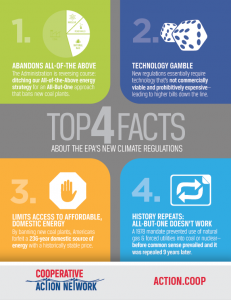 The Environmental Protection Agency (EPA) recently released regulations to limit carbon dioxide (CO2) emissions at new and now existing power plants that will lead to more expensive electricity for members of electric cooperatives. As not for profit, member-owned ­cooperatives we are concerned about the impact this will have on the price of electricity and our members’ bills. And we’re concerned the EPA’s new proposed regulations will also cost our ­economy and cut jobs.

For example, the U.S. Chamber of Commerce’s Institute for 21st Century Energy released a report that estimated the regulation could cost the economy $51 billion and 224,000 jobs a year through 2030.

The Boilermakers union has also stated, “Across the nation, thousands of good-paying jobs are disappearing and the communities that depend on them are ­withering as scores of coal-fired power plants shut their doors. Energy ­generated from coal has long been the driving force behind our manufacturing strength and our pros­perity as a nation. Recent decades have witnessed ­remarkable strides in ­reducing the environmental impact of coal ­emissions, and our field construction members have been at the forefront of those achievements. The truth is that every energy source, including coal, natural gas, nuclear, wind, solar, ­thermal, hydro and tidal, carries certain limitations and environmental considerations. Even the new darling of electric power — natural gas derived from shale — has its own environmental issues, including the release of ­methane, a much more potent greenhouse gas than carbon dioxide. Demonizing coal or any other energy source is not the answer.”

“Our initial analysis indicates there will be a loss of 75,000 direct coal generation jobs in the United States by 2020. Those are jobs primarily in coal mines, power plants and railroads. By 2035, those job losses will more than ­double to 152,000. When a U.S. government economic multiplier used to calculate the impact of job losses is applied to the entire economy, we estimate the total impact will be about 485,000 permanent jobs lost.

“The UMWA has not and does not dispute the science regarding climate change. Our dispute is with how our government is going about addressing it, and on whom the administration is placing the greatest burden in ­dealing with this challenge. Coal miners have been asked for 150 years to provide the means to energize America and make our nation the strongest on earth. We have always answered that call. We have done what our nation asked of us. But under this rule, our reward is to be kicked to the curb, hopefully out of sight and soon forgotten.”

Our rural economy needs jobs and affordable ­electricity. That’s why we’re asking everyone to send comments to the EPA through www.Action.coop. This easy-to-use online tool directly sends your thoughts to Washington so ­regulators understand the potential harm these regulations could cause.

In case you’re wondering whether the EPA actually will read these comments, consider this: by law the EPA is required to ask the American public how a proposed rule would affect costs to consumers, the quality of life and the economic future of their communities. Let your voice be heard and go to www.Action.coop today.