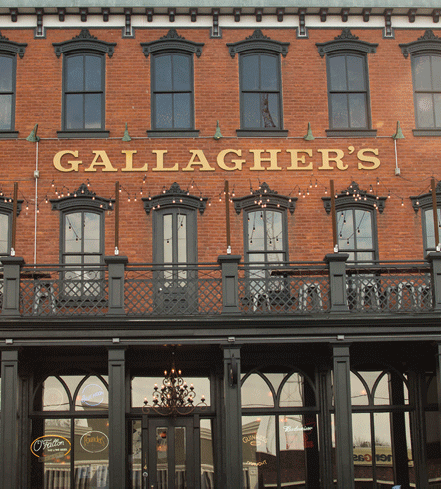 As you approach the beautiful 1870s building in historic downtown Waterloo, it’s hard to imagine how the old building must have looked in 2003 when John and Susie Gallagher purchased it. Susie says the building was a rundown bar with bars on the windows, and the upper two floors were falling apart. The entire back side of the building had to be torn down and replaced.

Susie recalls the first time she saw it after that demolition. “It was shocking. I could see inside, kind of like a dollhouse, with the open rooms and the old stained wallpaper. I thought, what have we gotten ourselves into?”

John, who does construction work, had a vision to restore it to its original elegance. He, Susie and their five sons along with numerous nephews, brothers-in-law and others did the work. It took 18 months and much physical labor to get the old building up to modern standards. Susie was excited when the old plaster was removed from the walls and ceilings to reveal beautiful brickwork throughout and wood beams on the ceiling of the third floor.

One of the first things that catch your attention when you step inside Gallagher’s is the century-old bar, made from quarter-sawn oak, that runs the length of the room. It is original to the building and was refurbished along with the stained-glass bar back. Always resourceful, John purchased an alley from the former Beehive Bowl in Waterloo and made the heavy solid tables found on the first floor.

The booths in another first-floor dining area were fashioned from old wooden pocket-doors discarded from the Chase Park Plaza in nearby St. Louis. The second-floor balcony features railings from the 1908 McKinley Bridge, which a friend of John’s offered him. The third floor contains a refurbished 1920s bar and hosts special events. Susie is now in charge of those events, and son James manages the rest of the operations.

When Gallagher’s first opened its doors, it had an extensive menu of family recipes, and they were advised to pare down the menu. James explains they have learned to be more selective. They want everything to be good, all the time. Their former chef Mickey Kidderman helped set them on the right track. He is now retired from the restaurant, but not before he made sure everyone in the kitchen knew exactly what to do. James says they still call him from time to time when they have a question.

Gallagher’s specialty is its award winning fried chicken. “The popularity of our fried chicken just kind of happened,” James recalls. “People would stop in when they were taking a Sunday drive. We are very family-oriented, and inexpensive for what we offer.”

What really surprised them was winning the St. Louis Post Dispatch honor of Best Fried Chicken. They didn’t even know they were being considered because it is a customer-driven nomination process. Nominations are made, narrowed down to 15 or 20 places and then online voting takes place to find the top contenders. Food critics are anonymously sent out to try the chicken and make their recommendations. Gallagher’s chicken is soaked overnight in brine and then battered with a special combination of spices including cayenne pepper, thyme, oregano, dry ranch dressing and potato flakes.

“After we were named the best fried chicken in the St. Louis area,” notes James, “we didn’t expect the kind of crowds it would bring. It changed our business drastically. We had to buy more equipment, expand the kitchen, hire more employees, etc. We have served 700 people on a Sunday, and it’s not uncommon for the line to be down the street when we open at 11:30 a.m.”

On Sundays, the all-you-can-eat family-style chicken dinner is all they serve. “If you’re gluten-free, sorry,” says James. “If you are vegetarian, don’t come; allergic to dairy, it’s not a good time. We do everything from scratch. The dinner includes mashed potatoes and cream gravy, biscuits, corn pudding, slow cooked green beans with ham and a complimentary dessert, which mom makes.”

You can order the fried chicken other days of the week. It comes with hand-cut fries and a pickle.

After the popularity received, other items on items on the menu started to be recognized as well. The restaurant has won numerous awards including the Budweiser Burger Battle.

Gallagher’s burgers are a half-pound of freshly ground brisket, and it offers a variety of special burgers, many which include candied bacon, Vermont cheddar and house-made mayo. James explains, “We like the fat content in brisket and the way it caramelizes when we cook it over the open flame.”

Occasionally, they offer a prime rib burger, depending on the market price. John says they plan it for a day when they know it will sell out, so that it is the freshest. It is topped with caramelized onions, melted Provel cheese and a horseradish aioli.

Other than the chicken and burgers, the southern-style comfort food is popular including fried green tomatoes. James says it is unbelievable the amount of fried chicken gizzards they sell.

After 4 p.m., Gallagher’s includes offerings such as Grand Marnier Maple Glazed Salmon or hand-cut tenderloin or ribeyes, which are seasoned with Montreal seasoning, grilled to the proper doneness and then dunked in a clarified butter bath to seal in the juices.

On most Saturday nights, local bands play from 8 p.m. to closing. You can view the menu on their website at www.gallagherswaterloo.com, or find them on Facebook.