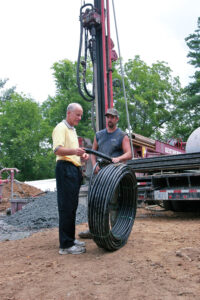 There’s a saying in the lobbying world: Be Persistent, Be Seen and Be Consistent. The Geothermal Exchange Organization (GEO) recently returned to the capitol for the sixth time this year. GEO board members along with six members of our two advocacy teams ascended Capitol Hill in early June for 29 meetings with members of Congress. More meetings were held the last week of June and then after the July 4 break. In total, GEO has met with over a hundred members of Congress since the beginning of the year.

Our message – Enact ­legislation and give the geothermal heat pump industry exactly what the solar ­industry got last December, with extensions of its tax credits for five years in the Omnibus spending bill.

GEO has met with senior staff of Congressional leadership twice this year, and again asked that Congress fix the inequity of applying the tax code in Sections 48(a) for commercial projects and 25D for residential jobs. GEO has been persistent, certainly seen, and the “ask” has never changed.

The challenge is finding a legis­lative vehicle and working through the political process. We are now focused on H.R. 5167—the Technologies for Energy Security Act—which would do exactly what the geothermal heat pump industry is asking for. GEO’s objectives during the most recent trips to Washington were to increase the number of House Republican and Democrat ­co-sponsors of H.R. 5167, and to get a ­bipartisan ­companion bill introduced in the Senate. We were warmly received by many, and ­gratified by their support as evidenced by the increasing number of House ­co-sponsors we are getting to sign onto the bill.

We believe that another re­author­i­za­tion bill for the Federal Aviation Administration (FAA) will have to be passed by July 15, and that it could provide the legislative vehicle for our amendment.

We are hearing more and more senators and representatives ­stating the need to level the playing field for renewable energy incentives before comprehensive tax reform is debated next year. If not the FAA bill, we will work to find another legislative ­vehicle after the summer recess. If that doesn’t occur, we will look for a final opportunity this year, after the ­elections, during the lame duck ­session of Congress. Persistence counts.

GEO and 18 other ­organizations have signed a letter to the four ­original co-­sponsors of H.R. 5167 (Tom Reed [R-NY], Mike Thompson [D-CA], Pat Meehan [R-PA], and Earl Blumenauer [D-OR]) ­expressing support for their bill. A copy of this letter and other information about the work of GEO can be found on our website, www.geoexchange.org.

Rest assured, that for the remainder of the year GEO—the Voice of the Geothermal Heat Pump Industry—will Be Persistent, Be Seen and Be Consistent!

With tax parity more co-op ­members will be able to afford ­geothermal heat pumps. Remember, geothermal heat pumps are the most efficient heating and cooling tech­nology in the world. Compared to conventional HVAC equipment, they can save up to 75 percent more energy. A recent U.S. Department of Energy study showed that 75 percent of the average home’s energy needs can be met with the earth’s stored thermal energy. By tapping into that thermal energy, a building’s heating and cooling needs can largely be met by a source right under our feet.