While traveling in Florida for work in 2011, Joel Baker saw something that would change his life forever. A giant. This towering figure was approximately 20 feet tall wearing blue pants, a red shirt, yellow ball cap and holding a wrench.

This giant, commonly referred to as a “muffler man,” was one of hundreds of fiberglass sculptures scattered across the U.S. in the 1960s used for roadside attractions and advertising. Most were created by International Fiberglass, a now defunct business from California. The giant Baker saw was a Paul Bunyan version, but there are many others including cowboys, American Indians and Vikings.

“They’re 50 years old and still around. You just don’t see stuff like this anymore,” says Baker, who is the founder of American Giants, a company that documents and restores muffler men.

Baker explains that these fiberglass giants had close ties with the oil giants in the ‘60s. International Fiberglass started making the Phillips 66 cowboy that stood at gas stations across America. Then Texaco had an exclusive giant created called the Texaco Big Friend. It was larger and made to look like the friendly Texaco service man.

About 300 of these 22-foot friendly giants were deployed across the U.S., but after a few incidents that involved them toppling over, they became a liability issue. Texaco ordered them to be exterminated.

“They were successful in that,” Baker says. “They were all destroyed except five. I think that became my favorite… my obsession. The holy grail of muffler men was the Texaco Big Friend and finding any that may still exist.”

Baker has traveled across America in search for these fiberglass giants. “It just went from there,” he says. “I really got into the research and history.” He started calling people who used to own them and contacted others who worked on them, including the former owner of International Fiberglass. “I just really went all out on the historical end, and it grew over time.”

These giants became his passion. “It was a fun game for me to see where I was going on my next trip and discover how many I could find. That number kept growing.” Baker estimates he has seen around 160.

In the beginning, he would go out of his way to visit them and take photos and video footage. Then he started making YouTube videos, and that’s how American Giants was born.

“I thought, well there’s a lot of interest,” Baker explains. “I focus specifically on muffler men, and nobody else was really doing that.” 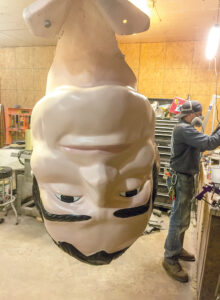 His newfound love raised a few eyebrows, to say the least. “The reaction I got from my coworkers, friends and parents was… they thought I was losing my mind,” Baker laughs. They didn’t understand why he would go two hours out of his way to see a fiberglass giant. The men Baker worked with would call these giants “Joel’s doll collection.”

“But one thing I had from the beginning was passion. I was very passionate about the history, and nothing would stop me. I knocked on any door or any business. I would go to great lengths to track down details. I think anything you’re passionate about can be contagious.”

After a while, Baker says the teasing stopped, and people started helping him. They went with him on trips and out of their way to make special stops to photograph these giants for him.

“I initially thought what I was doing was a little crazy,” Baker admits. “But I soon realized there were lots of people out there that had a genuine interest in the history of our American roadside. That just drove me on.”

American Giants was launched in 2013, starting off as a website that shared information, photos and documentary-style videos of fiberglass giants. Two years later, American Giants took a gigantic step into muffler man restorations. The restoration shop is in a small Illinois town in Franklin County.

Everything changed for American Giants in 2015 when a 14-foot version of the Paul Bunyan muffler man, a smaller version briefly made by International Fiberglass, was found in disrepair.

“It was about two hours from my house and in awful condition,” Baker says. “It was missing its head and arms. We didn’t know anything about restoration or fiberglass, but I wanted to save this guy and restore it.”

That’s when he and some of his friends started to learn about fiberglass. “That was the first restoration we ever did,” Baker says. “From that moment on, we started doing restoration.”

Since then, American Giants has become known for its fiberglass giant restoration, and while Baker finds and purchases them to restore, the company is oftentimes hired for the job. 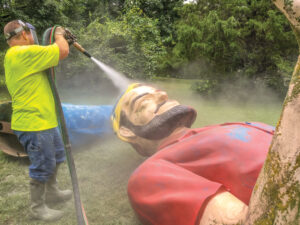 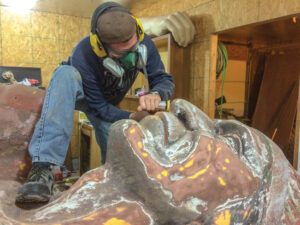 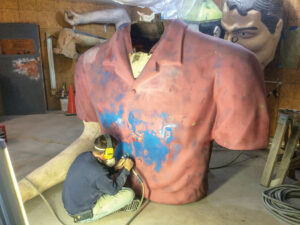 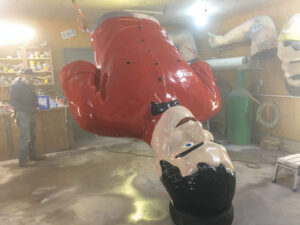 So far, the team has completed five restorations. While that may seem like a small number, it’s no small feat. The American Giants team all have full-time jobs, so everything is done in their free time. Plus, restoration of these fiberglass giants takes a lot of work.

Restoration can take anywhere from three to four months to as long as eight or nine. It all depends on the giant’s condition. The wear and tear of standing outside for 50 years can take a toll on them.

While Baker has found some in great condition considering their age, time did not treat others so kindly. High winds cause hairline fractures over time, storms can topple them and many are covered in bullet holes.

“Every giant has a different story,” he says. “We find these guys in all kinds of conditions…  While some are well preserved and just need a paint job, we’ve restored some that could really be considered trash – literally busted to pieces. We’ll tackle anything. These guys are so old and rare. It’s worth restoring them no matter what condition they’re in.”

Some of the restoration team consists of Baker’s friends and former co-workers Michael Younkin and Will Worf. Younkin focuses on fiberglass repair. “He’s one of those guys that’s good at whatever he tries to do,” Baker says. “He is really the reason we’re in restoration. I couldn’t do this without him.”

Worf does the painting when the fiberglass is fully restored, and he welds internal structures so the giants can free stand. “If we didn’t each have the skillset we do, this wouldn’t have worked,” Baker says. 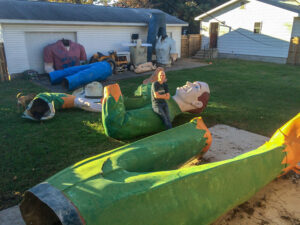 Muffler men were made from molds and must be pieced together: two arms, the torso, the legs and the head. When restoring one of these giants, the first thing after taking it down is take it apart for transport. One way to do this is from the hollow inside, and the only entrance is through the bottom of the feet, so someone must squeeze into the belly of the giant.

At the shop, any damaged fiberglass gets repaired and any weak areas are reinforced. “We go over them with a fine-tooth comb to find any structural problems,” Baker explains. “Our goal is to restore and repair the fiberglass damage, so you don’t even know where the hole or crack was.”

“Our goal is to make these guys last another 50 years before they need restored again,” Baker says.

While the restoration team is still located in southern Illinois, Baker moved to Colorado a few years ago for a job opportunity. “At the time, I was really concerned that would be the end of the restoration part of it,” Baker says. “But we had a big chat and they said, ‘Joel, we want to keep doing this… We can make this work,’ and we do.”

Baker works on managing, researching and working with customers while the restoration goes on. He is always on the hunt
for these giants, especially the ones no longer on the roadside.

He finds old photographs and goes to the communities where these giants once stood. “I will go to places where locals like to hang out,” Baker explains. “I will show them [the photo and say,] ‘Hey, this was here in 1987, do any of you remember it?’ They always do.”

He remembers doing this very thing outside of Chicago. In search of a muffler man called the “waving giant,” he walked into a restaurant and approached a young man. Baker remembers him saying, “It is the oddest thing that you would come up and ask that… I work at a car dealership, and that giant is in the attic of the building.”

Baker was invited to see it. After this 21-foot giant was taken down and put into the attic for storage, the building was remodeled, and now it is entombed there. “I climbed up this little ladder… and there he was all covered in cobwebs. It was just the coolest thing,” Baker says.

“It is kind of like Indiana Jones, but instead of the holy grail, we’re looking for big fiberglass giants,” Baker laughs. “It is amazing how well they can hide for being 20 feet tall and hundreds of pounds. They can hide very well.”

Baker says Illinois is a great state for muffler men. “It is one of the best. I’m not sure how they all just happened to end up in Illinois.” There are about 20 giants in the state, several along Historic Route 66.

There are some famous and rare muffler men in Illinois. “Probably the most famous muffler man is the Gemini Giant in Wilmington,” Baker says. “It’s an extremely iconic one.”

The Gemini Giant is one of just a few space versions made and is the only one known to have survived the decades and still stands today. In addition, there’s the Paul Bunyan giant holding a hot dog in Atlanta, Ill. (formerly in Cicero), the Lauterbach Tire muffler man in Springfield, and Vikings in Springfield and Nauvoo that are now used as high school mascots.

In addition, three muffler men can be found in one place in Livingston, which is home to the rare Uniroyal Gal – the only female version of the muffler man made by International Fiberglass. She was used by the Uniroyal Tire Company for advertisement. There are only about 15 left, and Illinois is home to two of them. The other is in Peoria.

There should be more giants coming to Illinois soon. While Baker can’t give many details, American Giants is working with a few Route 66 towns on projects related to muffler men. “I expect to see more muffler men on Route 66 in Illinois within the next year or two,” Baker hints. “Varieties that don’t currently exist in the state.”

Baker says he now has quite a collection of muffler men – seven to be exact. This includes a Philips 66 cowboy, one of the five remaining Texaco big friends and two Paul Bunyan giants. Many of these giants are in the restoration process.

“These giants bring joy to people in different ways,” Baker says. “They come from a unique and special time in our American history, especially roadside history that’s no longer there. Somehow these giants have been able to survive and remind us of that time. They need to be preserved. We want to continue to keep these giants alive.”

For more information about American Giants and muffler men, go to usagiants.com. For frequent updates, follow @americangiants on Facebook and Instagram. For additional information on roadside attractions, visit RoadsideAmerica.com.