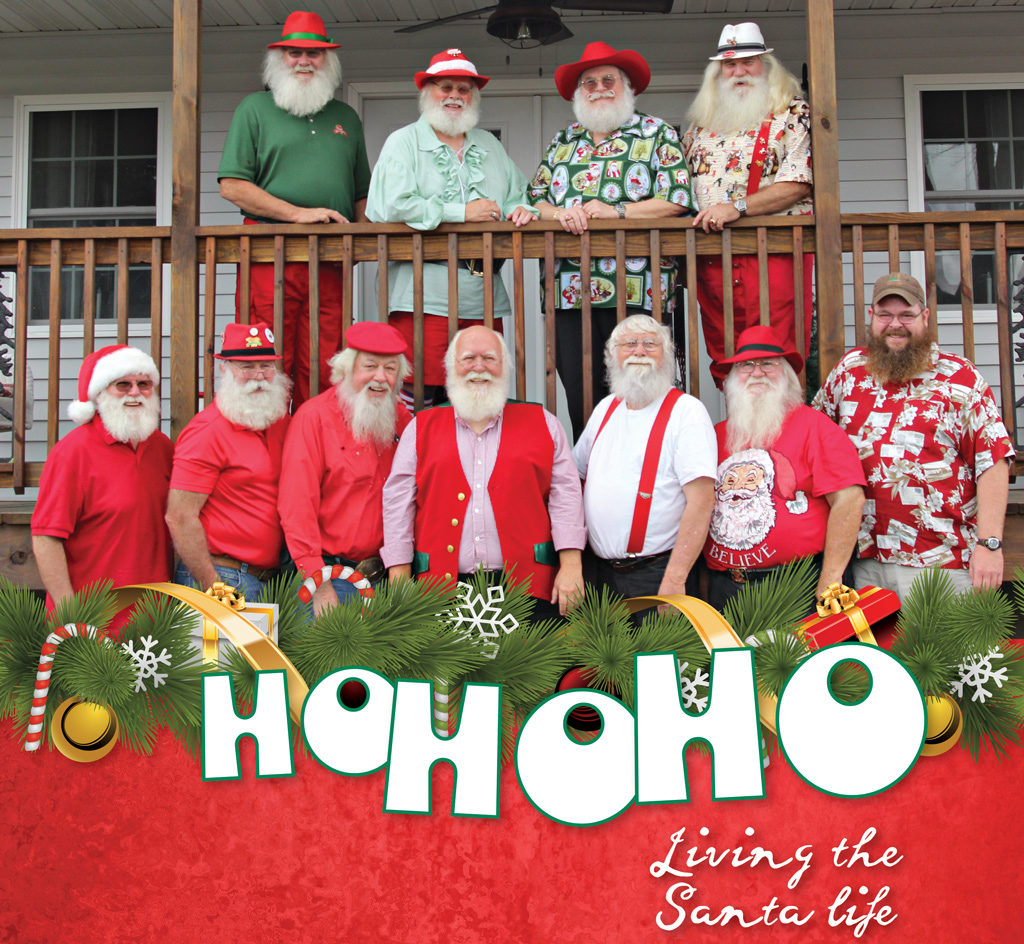 “‘Santa, I need a hug.’ I turned, and there was a lady in a wheelchair. I started to bend down to hug her and she said, ‘No, give me a minute.’ She pulled herself out of that chair to stand up. She told me she had MS. I was giving her a hug, and she was crying. Her legs gave out, and I slowly helped her back into her chair. She said, ‘thank you very much! I’ve never had a hug from Santa.’”

It wasn’t December, and Don Simonson wasn’t wearing a Santa suit, yet people approach him and think he is Santa. Simonson, from Glen Carbon, is one of many who live the Santa life. He is white-bearded, rotund, with a smile on his face, a natural “Ho, Ho, Ho” when he laughs and is usually wearing red and green. He, and many like him, take their natural Santa features very seriously and embody the jolly old elf.

It’s not unusual for them to be approached in restaurants, or other public places, and asked if they are Santa. Simonson always carries special business cards he hands out with a photo and the opposite side states, “I’m coming back to town soon to deliver Christmas presents to all the girls and boys. I’ve been watching you, and you have been very nice. Good job! See you soon, Santa Claus.”

At a recent gathering of central Illinois Santas at the home of Gloria Wendling, located at the corner of North Pole and Santa Claus Lane in Nokomis, one attendee wore a green striped shirt, red knickers and candy cane stockings while another sported a green Hawaiian print shirt adorned with Christmas scenes. All but one had white beards, were rotund and when they laughed, it was with that jolly “Ho, Ho, Ho” we expect to hear from Santa. It was a natural laugh, not one that sounded forced, and was cultivated until it became second nature.

Santas come from all walks of life – one a former surgical nurse, another a teacher. They found each other through various Santa Claus organizations. Many of them belong to the International Society of Real Bearded Santas and other state and national groups such as the Red Suit Society and Santa America. Wendling and her now deceased husband Dennis were vital in forming the central Illinois group. She continues to be Mrs. Claus to other Santas, including Ric Jones of Nokomis. Most of the group are on Facebook or have their own websites, and keep in touch in that manner. They can be found portraying Santa at venues across Illinois, nationally and some have even traveled internationally.

In all they do and wherever they go, these gentlemen embody Santa.

“In our business, you have a lot of really nice guys with white beards,” explains Santa Terry Bell of Lincoln. “They perform a duty with humility, but Santa is here (points to his heart) not in your head. You don’t turn it off. You can take the suit off, but you’re still the same person – Santa.”

Santa Don Baxter of Nokomis says, “We don’t do Santa, we are Santa. I am Santa. If you don’t believe it yourself, how are you going to convince a child?”

And believing is an integral part of who they are. That belief extends to Christ. The entire group are Christians and keep Jesus in the holiday. They see themselves as the hands and feet of Christ in attitude and action.

Most have had kids of all ages on their laps, from a few hours old to 102. They each have experiences that are touching, heartwarming and sometimes hard.

Ken Fulkerson of Wood River belongs to Santa America which is a national service organization that reaches out across the country to visit children and families facing tough situations. The group visits children in their homes, hospitals or hospice to spread love, hope and joy.

Fulkerson recalls a time he was visiting St. Louis Children’s Hospital for a NICU Christmas Eve party. “I was asked to visit this newborn, only a couple of hours old, who wasn’t expected to live. I held him for 10 or 15 minutes and before I left, gave him a kiss on his forehead,” he says with misty eyes. “I had to leave and get my tears out. On Christmas, I returned and ran into his grandfather. He told me after I left he took a turn for the better; that my kiss gave God back into him. I don’t know if he is still alive, but I’ll never forget that experience.”

Baxter received a call one July morning asking if he could come to Lincoln. A young girl with a hole in her heart was supposed to have a Make a Wish Day with Santa, but got sick and couldn’t go as planned. He dropped everything and traveled over an hour to see her. “When I arrived, she was sitting and watching Santa Claus on television, which she did every day,” he explains. “It got to be lunchtime, and we went to McDonald’s. I had a bunch of candy canes which I gave to her to pass out to other children and tell them they were from her Santa. She had the biggest smile on her face! You think you’re making their day, but in reality they are making yours. Santa never stood so tall as he that stooped to help a child. When you do, each and every heart you touch, you know it’s God’s grace, and you can’t replace it.”

Not all of their stories are sad. One Santa was part of a marriage proposal, while another was part of a child being reunited with her father who had been serving in Iraq.

It’s not always easy being jolly and upbeat. After they don their suits, some listen to Santa Claus songs in the car to get in the mood. Sometimes they need a pep talk or will watch a Christmas DVD. Jim Morgan of Windsor says, “Some days it’s hard. Then you get the first bunch of kids that are having a great time, and that’s all it takes.”

The suits each Santa wears is personal preference. There are three basic styles of suits: majestic, standard and Coca-Cola. The majestic style is more European and usually has a lot of fur trim and may be burgundy with an open front, rather than button closures. The standard is best described as the Norman Rockwell painting of Santa on the Saturday Evening Post, and the Coca-Cola suit has the big brass buttons and brown belt as depicted in commercials. Fulkerson belongs to a black powder group and had a special mountain man suit designed for those occasions.

There are Santa and Mrs. Claus conventions, institutes and schools where they can learn the history of St. Nicholas along with basics such as saying “Ho, Ho, Ho,” how to welcome children, photography basics and talking with children. Additionally, attendees learn about background checks, insurance, Santa’s magic suit and appearance. Some Santas entertain through use of storytelling, singing or magic and make a business of being Santa.

Many of their spouses portray Mrs. Claus, while other wives refer to themselves as CEOs, Chief Elf Organizers. The CEOs help book Santa’s appearances or assist him in getting spruced up for his appearance at malls, hospitals, etc. Mrs. Claus often helps calm those children who may be apprehensive of the big guy in the red suit. In whatever role they play, the wives are a vital component.

Santa and Mrs. Claus also offer tips to make the most of your Santa visit:

During the season, when Santa is seemingly everywhere, children may ask if he is the real one. Since he can’t be everywhere, he enlists the help of many like himself.

The real Santa is out there, it’s up to you to figure out which one it is. 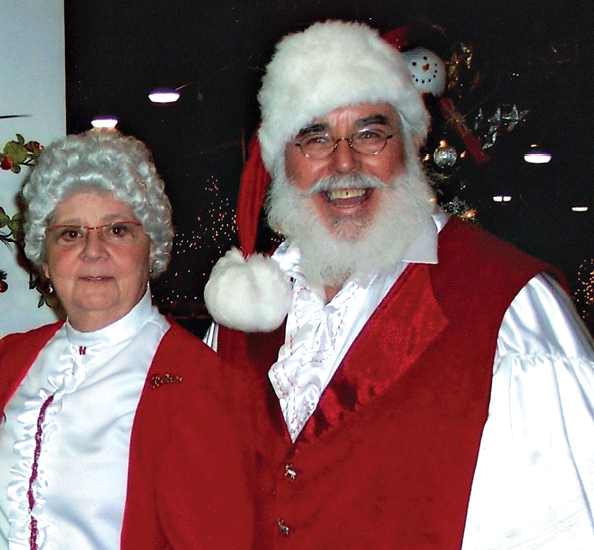 Dennis Wendling was a much-loved Santa that was always at the Memorial Hospital Festival of Trees. He passed away quite suddenly nine years ago, and people still miss him. According to Santa Terry Bell, “Dennis was the epitome of the magic of the season. He could have been eight feet tall and purple, and it wouldn’t have made a difference – he was Santa.”

Bell recalls attending a couple of Santa conventions with Wendling. “You always knew when Dennis was there because you could hear his booming laugh across the room.”

After his passing, Wendling’s widow Gloria was encouraged by her minister to honor Dennis as Santa. That’s who he was. His was the first Santa funeral. Gloria says the entire liturgy was putting Christ in Christmas and explained how Santa came to be, and how that story is wrapped up with Christ’s birthday.

A special poem was written, which is now used at all Santa funerals. The song “Here Comes Santa Claus” played as the casket was brought into the church. It was followed by eight Santa Clauses to represent the eight reindeer. At one point, Christmas carols were sung by the Santas, and as the casket left the church, “Silent Night” was played.

“If it hadn’t been for the support of all the Santas after Dennis’ passing, I don’t know if I would have made it,” says Gloria.