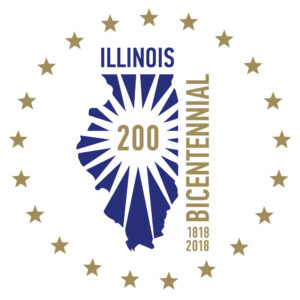 The year was 1818. James Monroe was in his first term as the fifth president of the United States. The first Farmers’ Almanac had just been published and Silent Night was about to be performed for the very first time. Blue jeans, the telegraph and the electric light had not been invented. John Deere was still almost two decades away from the innovation of the steel plow.

Congress had adopted the Flag Act, designating the nation’s banner to consist of 13 stripes alternating red and white and requiring a white star for each state in the union. On Dec. 3, one more star would be necessary as Illinois became the 21st state.

In the 200 years since, the state has become a leader in agriculture, industry and business. It has produced four presidents, countless inventions and innovations, and has become a center for culture, entertainment and transportation. All told, Illinoisans have had much to celebrate during the state’s bicentennial observation throughout the year.

“Illinois is such a diverse state, such an accomplished state, that this 200th birthday gives us some perspective and opportunity to celebrate,” explains Alan Lowe, executive director of the Abraham Lincoln Presidential Library and Museum in Springfield. “I think we all can get wrapped up in daily life, and this has been a chance to step back and realize that this is a great state with an awesome story and so much potential to do even more in the future.”

Lowe is part of the 57-member Illinois Bicentennial Commission, a group of governmental, civic, business and other leaders appointed by Gov. Bruce Rauner to oversee programs and events as part of the bicentennial celebration.

“There has been a huge listing of events and programs all around the state, and the bicentennial has meant many different things for people all across the state,” he adds.

Many of the events have been statewide undertakings ranging from an online poll to select the state’s top 200 people, places and things to local events such as historical presentations and restoration projects. 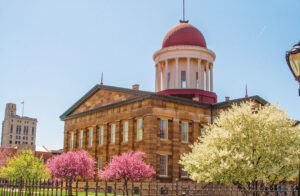 “This has given all of us a chance to be proud of our communities – our broader state community as well as our specific local communities – by celebrating the talented people and the great moments in history that have moved our society forward and have made positive impacts,” Dixon Mayor Liandro Arellano, Jr. says. “When you are looking around and you are taking stock of where you live, you want to have pride. This 200th birthday party is an opportunity to do exactly that – to have people become more passionate supporters of their specific region and the state as a whole.”

Arellano says the bicentennial really has been a statewide celebration that has touched all areas and aspects of the state.

Brad Cole, executive director of the Illinois Municipal League which represents all 1,298 cities, villages and towns in the state, says communities and residents statewide have worked to make the celebration special.

“It’s really been the coming together of everybody throughout the state to focus on good things in their area which has been notable for me,” he says. “Maybe a community has just mentioned the bicentennial at their local events or perhaps they’ve done something special. I think of a penny drive by school children to help purchase an Abraham Lincoln artifact to be contributed to the presidential museum. There have been those types of stories all around where small towns and big cities all have done what they could to help recognize the anniversary.”

Arellano adds that the bicentennial celebration – an obvious “feel good” observation – came at the right time for the state.

“The bicentennial has been an opportunity to let a new generation know and to remind the older generations of some of the great things that maybe we’ve missed or forgotten about,” he explains. “For me, it has been a way to provide a counterpoint to some of the negativity that we’ve seen over the past few years. We found ourselves in an era in Illinois where there was a lot of financial and political stress, and this was an opportunity to push back and remind people what is great about our state. Yes, we need to tackle Illinois’ problems, and they have been very serious, but we shouldn’t forget what makes us want to tackle them. It is motivation for keeping our state great. We have lots to be proud of.”

For Illinois Supreme Court historian John Lupton, who remembers as a child being in awe that Lincoln practiced law in his hometown of Shelbyville, the bicentennial observation not only has fueled his passion for accounts of the Prairie State, but he says the celebration has served to find common ground.

“The history of Illinois is the history of everything,” he points out. “It’s family histories, it’s social history, economic history, it’s agricultural history and more. Illinois has frequently been called a kind of microcosm of the entire country. It’s all happened here.”

He continues, “There is so much history in Illinois, it’s hard to focus on all of it in one year. For me, the big take-away is to keep reading about the state’s history and learning more.”

Much of the focus during the bicentennial has been on President Abraham Lincoln, arguably the state’s most loved native son, but other notable figures have been given their due, especially Presidents Ulysses S. Grant, Ronald Reagan and Barack Obama.

“It’s pretty amazing that Illinois has raised four men to the presidency,” Lowe explains. “These are not just presidents, they are really consequential presidents. We’ve been talking about their stories, noting how their background in Illinois helped
create the leaders they became.”

“I think we all started off looking at President Lincoln,” explains Duane Noland, president/CEO of the Association of Illinois Electric Cooperatives and a former state representative. “People were celebrating their Lincoln connections, but began to also embrace the connection to their forefathers. No matter where you are in Illinois, you have a history you can embrace and celebrate. The bicentennial is a good time to celebrate those successes and the great things that makes each of our communities what it is as well as to tie those together.”

Public libraries across the state have held special presentations about local and Illinois history, photo contests and art exhibits have highlighted achievements and locales, and even corn mazes throughout the states have been designed with bicentennial themes.

“There have been so many things, it’s almost impossible to summarize or even list everything that’s been going on across the state,” Lowe adds. “There have been folks all over finding different ways to celebrate this big birthday.”

Mayor Arellano says the local celebrations have been both valuable and educational.

“I’ve learned a few things I didn’t know about my own community of Dixon,” he admits. “I’ve discovered things that make me proud, and I think that has been the goal of the entire year: to make us realize why our own community is great and what makes Illinois great. At the same time, one of the biggest positive things coming out of the bicentennial is gaining more of an appreciation for other parts of the state. For example, some who live in the Chicago area don’t necessarily think about downstate Illinois as much, so this has been an opportunity to learn about some of the great things that happened and are happening in other parts of the state and vice versa.”

Arellano adds that the bicentennial has been a way of trying to unite the state.

“We’re really on the same team. We should be celebrating each other. The fun thing for me has been seeing people from different areas of the state instead of amplifying their differences, they are amplifying the unity, and I think that was needed.”

Cole adds that it is a birthday deserving of celebration.

“Two hundred years is a big deal. Our state had quite a celebration for the centennial, and so 200 years is a great time to reflect on things that are built, born or grown in Illinois. It’s been great to highlight many of the great people, places and things of Illinois whether it’s the arts or humanities, science or industry, and sports or culture,” he says.

Although the Illinois bicentennial observation comes to a close as the calendar turns to 2019, Arellano and other members of the commission hopes the spirit continues.

“I’m trying to make the bicentennial an opportunity to remind people that we should be recognizing and celebrating a little more regularly,” he urges. “My hope is that we all have found some new knowledge and that we’ve all become a little bit more proud of Illinois.” 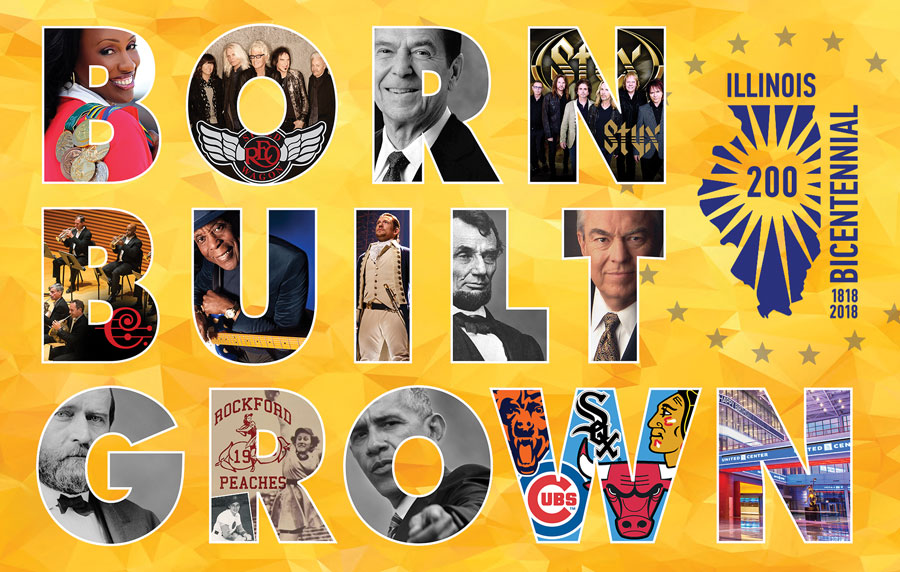 As part of the bicentennial observation, the state’s bicentennial commission and the State Journal-Register newspaper held a series of online polls asking Illinoisans to rank people, places and things from throughout the state’s 200 years. Ten selections will be made in each of 20 categories – the Illinois Top 200. Among them: 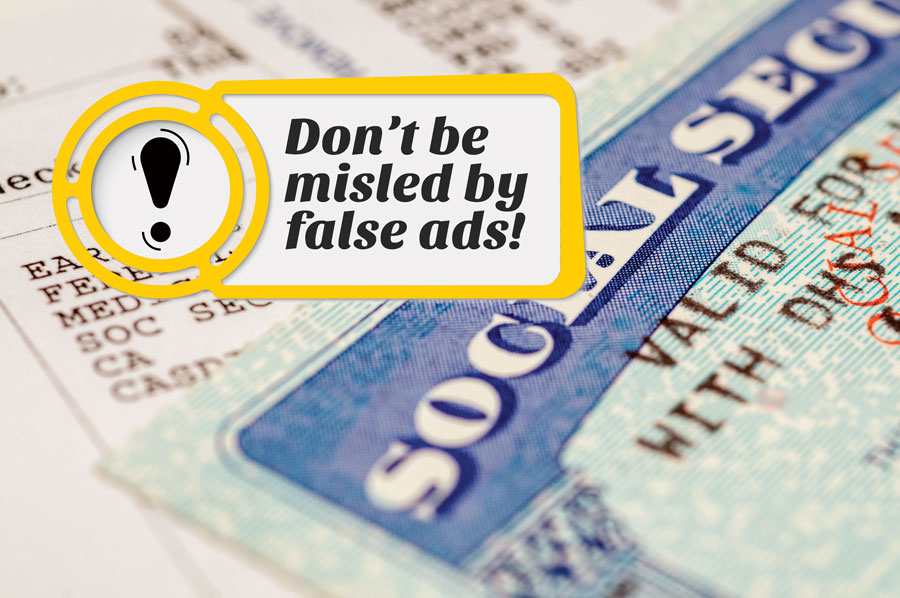 Don’t be misled by false Medicare or Social Security ads