Illinois Country Mother of the Year

Whether it be rain, snow, sleet or fair weather, you can find Illinois Country Mother of the Year, JoAn Bollmann (Grandma Jo to her ­grandchildren), sitting on the sidelines with a scorebook in her lap cheering on whichever grandchild is on the field. 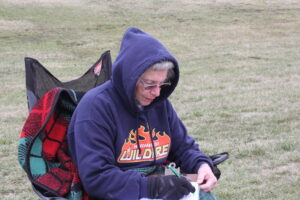 The scorebook tradition began out of the natural ­curiosity of her grandchildren. “My grandkids would always ask, ‘how many points did I make Grandma?’ I didn’t know, so I started keeping track of them,” says JoAn. “The kids knew I would keep track of how many shots they took, how many they made, team turnovers, etc. They’d come over the next day or two and get the book out and see how they’d done.”

According to daughter Linda Lodge, sports has always brought the family together. At any given game you can find aunts, uncles, siblings, cousins and of course Grandma Jo. JoAn, and her late husband, Walt, made it a priority to attend the games and she still averages four a week.

JoAn has three children – Mark, Michael and Linda. Mark and wife Mary have two boys, Trevor and Casey; Michael and wife Diana have two ­daughters, Emily and Lindsey; and Linda and husband Darl Lodge have a daughter and a son, Jordan and Hunter. All have been involved in sports ­including everything from football, ­softball, baseball, swimming and cheerleading. All you have to do is ask and Grandma Jo will be happy to tell you about them. She is one proud grandmother!

“My mother was a good athlete herself,” said Mark. “But she never got to play in high school because there weren’t any girl’s teams. I think if she would have had the chance to play softball she would have really excelled at it. My sister Linda played in college and her daughter Jordan is a high school pitcher. Mom used to go down and play softball at the Extension Center in Jackson County and loved it.”

Oldest son Mark nominated his mother upon his wife’s suggestion. “Over the years, with all the things she has done and continues to do, I just wanted her to have some recognition. She doesn’t want it, or look for it, but she is so deserving,” he said. “She is devoted to our family, always willing to pick up a sick grandchild from school, take them to games and anything else asked of her.”

Mark wrote how impressed he was with the love and care she showed his father after his diagnosis of melanoma in August of 2012. After learning in November that cancer treatments weren’t working, the family was told to take him home and make him comfortable for the rest of his days. 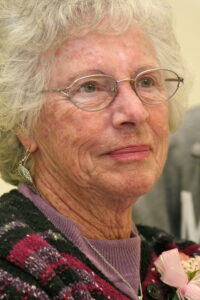 “My mom took care of my father with such diligence and care that truly showed the love they shared. They were never really affectionate with each other, but every now and then you would catch them looking at each other and you’d just know. They were married more than 55 years. The ­loving care she gave my father left a profound imprint on my life, and the way I will continue to live it. Her putting my father’s needs ahead of her own has impressed me in how to treat others in my life.”

JoAn explained that one thing Walt really liked to do was eat. She wheeled him to the dinner table for as long as she was able, but as his strength lagged it became ­impossible. That dinner table was, and continues to be, important to the family.

Sunday dinners are a tradition in the Bollmann ­household, and whether it’s for three or 13, JoAn will be ready. She learned years ago how her food brought together love, sharing and laughter (lots of laughter) when her ­family sat down together.

The tradition really started as a way for the family to connect. “We lead such busy lives,” says JoAn. “After Mark got out of college, Walt rarely saw him because they were in two different work modes. So, I said let’s have Sunday dinner and see each other. That’s when it started. Everyone knows they just have to let me know if they will be here.”

This devoted wife, mother and grandmother is a hard worker who doesn’t mind getting her hands dirty, literally. An only child, she worked from a young age at her “dad’s shirttails” farming and taking care of livestock. She and Walt purchased her uncle’s 80-acre farm in 1962, and they raised a few cattle and farmed the rest. She and the kids handled the farming while Walt worked as an electrician at the Captain Coal Mine.

To this day, JoAn still works in her garden, ­cultivating the vegetables she cans into the family favorites of ­spaghetti sauce, tomato juice, green beans and applesauce. She sends much of what she cans back to college with her grandkids. And, they can’t go back without a big bag of freshly baked cookies and fresh eggs from the hens she keeps.

JoAn was involved in 4-H from the age of 10 when her mother started the Helping Hands of Jackson County group, and she has been a part of the Extension family ever since. When her children were old enough, she and a friend started the Campbell Hill Cherokees of Jackson County. That was 44 years ago, and they currently have 18 members including two of her grandchildren. JoAn is passionate about the program and how it benefits its members. She even donated funds in her mother’s honor to establish an annual full 4-H Camp Scholarship. In 2006, she was ­honored to be added to the Illinois 4-H Foundation’s Hall of Fame.

Youngest granddaughter Jordan says, “Grandma will do anything for anyone.” While that may be true, JoAn remains humble. She likes to fly “under the radar” in her quiet manner, just loving her family and friends and ­cooking. After all, who knows when a grandchild might be home. That cookie jar needs to stay full!

To read the winning entry and all of the nomination letters, click here.