Shadows of the past

As early explorers and settlers pushed into the Midwest, they were amazed to discover earthen mounds, usually near rivers, organized in patterns or groups that hinted of prior habitation. Equally mystifying were figures of birds, animals, humans or abstract symbols, painted (pictographs) or carved (petroglyphs) in caves or on cliff faces.

Today, thanks to archaeologists and anthropologists, we know much more about these remnants of earlier cultures. Although the exact purpose of rock art remains a matter of speculation, the mounds, made as burial chambers or platforms for important buildings, are the remains of societies, often complex, that grew, flourished and disappeared before Columbus made his first voyage.

There are more than a dozen recognized mound sites scattered from southern woodlands to the northwestern tip of the state. Rock art sites are not as numerous or as well understood as mound sites, but they fascinate those who visit them. Two of the most significant are in southern Illinois. 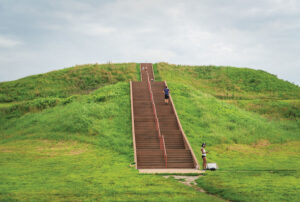 Just off I-64 and across the river from St. Louis is Cahokia Mounds State Historic Site, once the location of the largest prehistoric settlement north of Mexico. Occupied as early as 700 A.D., the site reached its zenith around 1050-1150 with a population of 10,000-20,000 and more than 120 mounds. The site was completely abandoned by 1350.

Eighty of the 120 mounds remain. The largest, Monks Mound, rises more than 100 feet with a base in excess of 14 acres.

Prior to the 20th century, the site suffered from deliberate destruction and neglect. By 1910, locals began to mobilize to save the site, and it became an Illinois state park in 1925. Designated as a World Heritage site by UNESCO in 1982, the park has grown to 2,200 acres with about 300,000 visitors a year. A proposal before Congress would designate it a national park.

The park boasts a world class interpretive center with extensive exhibits that offer insight into the life of the villagers and their contemporaries. Outside, there are more than 10 miles of mainly flat trails, with the exception of the climb to the top of Monks Mound. Visitors may take designated hikes, join a guided tour or wander the grounds. 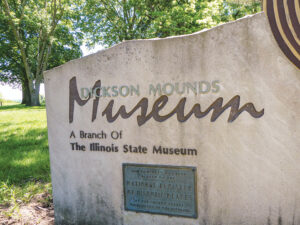 About 150 miles north on a low bluff overlooking the Illinois River is Dickson Mounds Museum, which marks the site of a settlement that flourished from about 900-1250 A.D. The site includes several burial mounds, two cemeteries and a village remnant. It is named after Dr. Don Dickson, who began excavations on his family farm in 1927, eventually unearthing more than 200 skeletons and opening a private museum. The state acquired the property and built the museum in 1972. The skeletons unearthed by Dickson remained on display until 1992.

Dickson Mounds is regarded as one of the most important archaeological sites in the state, but the focus of the museum has shifted from graves to exhibits and media presentations that give an overview of 12,000 years of human habitation in the Illinois River valley. A third-floor observation deck looks out on the Emiquon National Wildlife Refuge, a 2,200-acre wetland at the confluence of the Illinois and Spoon rivers. The restored wetland gives visitors an idea of how the area may have appeared to those who inhabited the area before the coming of white settlers. The 235-acre museum grounds include three outbuildings enclosing the foundations of ceremonial buildings, picnic grounds and five miles of hiking trails.

Two hundred-sixty miles north of Cahokia near the village of Albany lies the Albany Mounds State Historical Site. There were originally 96 mounds, but today only 47 remain. These mounds, dating back to Middle Woodland Period (200 B.C. to 300 A.D.),
predate Cahokia by many centuries and are deemed a significant archaeological site. In the 1990s, the site was restored as a prairie, and today’s visitors to the 205-acre site will find a convenient parking lot, picnic shelter and more than two miles of trails for hiking, biking or observing the wildlife of an Illinois prairie.

Located in East Dubuque, Gramercy Park is a 10-acre city park where history, nature and recreation meet. The park includes 26 mounds dating from the Hopewell period (200-500 A.D.), walking trails with archaeological and historical signage, a spectacular view of the Mississippi River, and city amenities literally moments away.

Located just off IL-147 between Vienna and Harrisburg, Millstone Bluff Archaeological Site contains remains of stone forts created by the Late Woodland people (600-900 A.D.), petroglyphs (rock art) and evidence of a village and burial grounds of the Mississippian people (1350-1550 A.D.).

Although the only remains of the village are round depressions atop the bluff and stone graves, long ago looted and/or vandalized, interpretive signage provides an abundance of information regarding life in the village and the importance of the sandstone petroglyphs on the northwest side of the bluff. The petroglyphs depict figures thought to be tied to the religion of the Mississippian people. The site is accessed via a well-maintained three-quarter mile loop trail.

Purchased in 1972 primarily for its rare plants, the 198-acre Piney Creek Preserve near Campbell Hill is home to the largest body of rock art in Illinois. Designs believed to date to the late Woodland and Mississippian periods have been documented. The designs include petroglyphs of humans, deer, serpents and crosses. Pictographs include humans, deer, birds, human hands and a canoe. The effects of time and human vandalism make many of the designs difficult to see. Visitors access the preserve via a moderate 2-mile trail.

For more information about past civilizations and other Illinois prehistoric sites, visit onlyinyourstate.com/illinois/prehistoric-attractions-il. 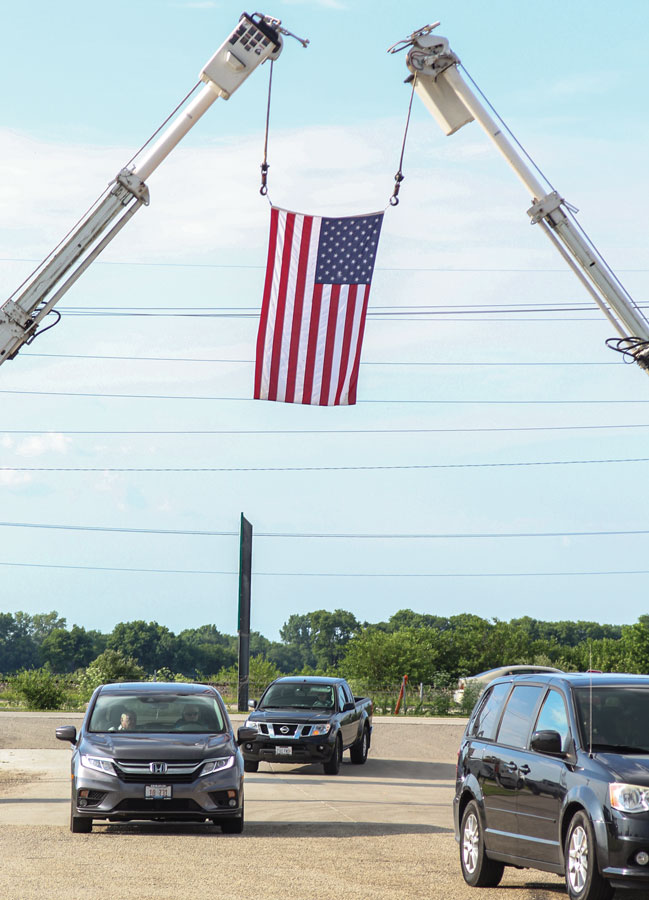 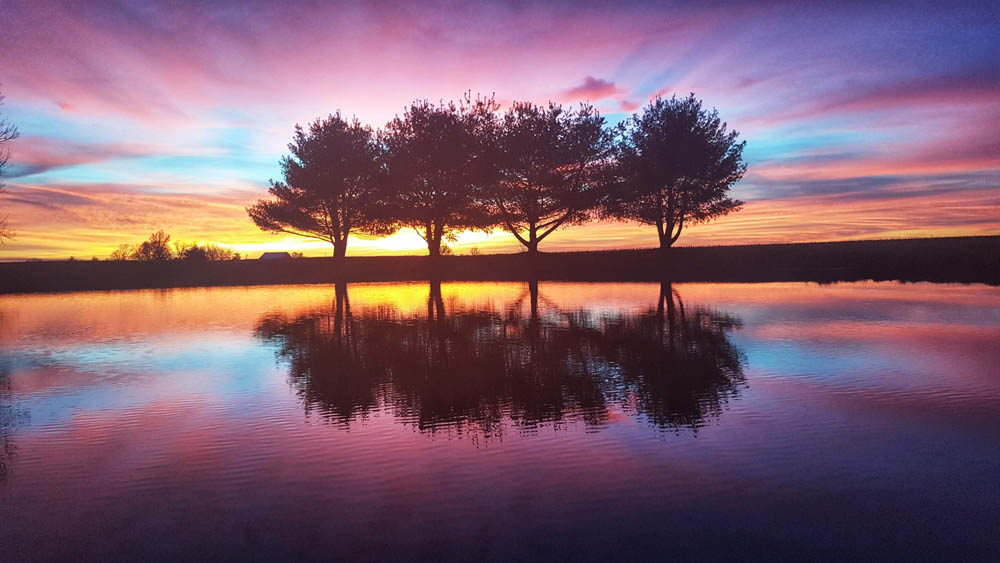