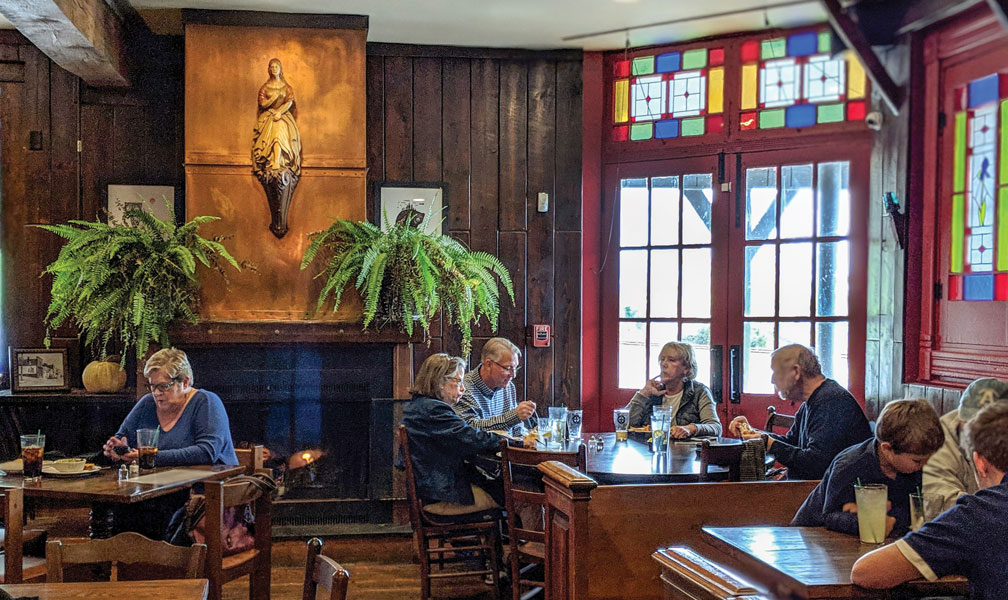 A first visit to the St. Nicholas Landmark reveals all kinds of surprises. 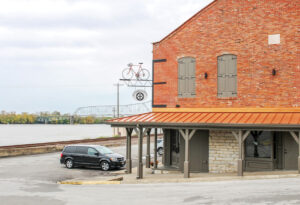 The Mississippi River provides a constantly changing view from the historic St. Nicholas Landmark. Originally operated as a hotel, the folks with St. Nicholas Brewery in Du Quoin remodeled the space and opened it last spring as a pub serving its local beer and pub fare.

One of Chester’s oldest buildings with history dating back to 1829, the Landmark features the original stonework floor, an antique bicycle that beckons to the founders of the St. Nicholas Brewery, a stained-glass work of a riverboat and lighted case filled with historic flotsam from another era.

Most recently renovated in 2017, the first floor has a large dining room and bar, but it doesn’t end there. Go upstairs and discover a second dining room with an amazing view of the mighty Mississippi.

On the weekends, there’s downstairs seating either by the stone walls, fireplace or at the bar, or head upstairs to snag one of the tables overlooking the river. Every seat is a good one.

Next comes the beer menu. There are under a dozen selections and if you’re not sure, just ask the server what pairs best with the food.

Speaking of the food, it’s certainly worthy of a trip – with beer or not. While the regular menu offers an array of sandwiches, appetizers and other expected pub fare, there are menu specials and some menu surprises (think baked olives topped with bleu cheese, bacon-topped Brussels  sprouts, an upriver version of a shrimp po’ boy sandwich or the king of their burgers, the Southern Delight with its burger topped off with a giant onion ring, pickle slices and a steak knife spearing it all together).

Sunday brunches are another great surprise and tend to fill up the parking lot. It’s because diners are lining up to enjoy one of four brunch options: the basic brunch for $9.99, a kid brunch for $5, a deluxe brunch that includes prime rib for $15.99, and the bottomless brunch featuring bottomless Bloody Mary’s, mimosas and prime rib. 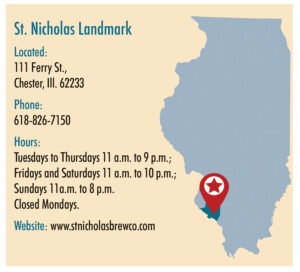 Keep in mind that the brewery is in Du Quoin.

If food and drink aren’t enough, there’s plenty of local history to feast on. The Landmark was built in 1829, allegedly attracting such folks as Mark Twain and Charles Dickens. Over the centuries, the building has been used as a buggy shop, bakery, grocery, candy store and restaurant.

The people behind the St. Nicholas Brewing Co. bought it in 2017, worked on renovations and opened in July 2018.

Posted in Taste of the Prairie