These fish put the bite on the fishermen 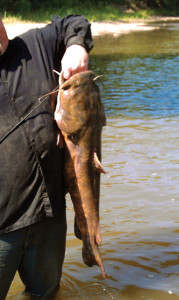 Long before anyone had ever heard of the television programs, “Hillbilly Handfishin’,” “Mudcats” or “Dirty Jobs,” the Williams and Campbell families had been hand-fishing (or hoggin’) in the Mackinaw and Kickapoo Rivers and Salt Creek in north central Illinois. In fact, both families have three generations of hoggers, as they refer to themselves.

“Catfish” John Campbell taught his buddy Bob Williams how to hand-fish and he was “hooked.” They then passed on the tradition to their sons. Bob Williams first took his son, Cal, at the age of 10.

Cal, manager of vegetation and safety at Corn Belt Energy Corporation, has since passed on the tradition to his son, James. John Campbell’s son Frank and ­grandson, Frank Jr. are still part of the group that fishes each year from mid-June to mid-July.

So how in the world did they start fishing by hand? Thirteen-year-old Catfish John learned hoggin’ from several farmers in the area. During the Depression when food was scarce, farmers raised what they could to feed their families and hunted for whatever they could find whether that was rabbit, squirrel, opossum, etc. Hand fishing sprung from that need to put food on the table and it costs nothing. 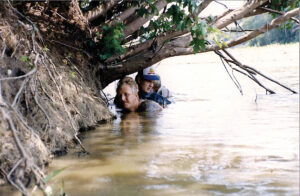 There are no rods and reels or boats involved. All it requires is a buddy (or two or three), a stick and a willingness to get wet – really wet! According to Cal, “You get hooked! If you’re cut out for this, that rush you get of making a stop and getting your first big fish is going to set that in you. But, it’s not for everybody, some will go once and that will be it.”

Flathead catfish live in holes, under trees and banks or in hollow logs in rivers and lakes. They get under rock ledges and hollow out an area to hide and spawn. Some of the holes can be four to five feet in length. And, these are not the typical catfish you reel in on a hot summer day, these flatheads can be as big as 50 pounds and have to be wrestled with.

Often the fish with its coarse sandpaper-like teeth will clamp down on the hogger’s hand. If the hogger can get his hand down in the fish’s mouth, he can get a better grip and get the stringer attached.

So why do you need a stick and a buddy? The stick is to poke into a log to try to chase the fish out the other end. The buddy helps block the fish from escaping and will pull you out if needed.

Father and son, Steve and Josh Davis from Rochester, Ill., took the plunge, so to speak, and accompanied Cal hoggin’ in June of 2012. Steve is the manager of ­regulatory compliance at the Association of Illinois Electric Cooperatives and met Cal through work. Steve is an outdoor enthusiast, as is son Josh. Cal invited them to go hoggin’ with him and his crew.

Josh admits to being rather nervous, but he and his dad donned old jeans, long-sleeved shirts and old gym shoes and joined the group. It was a cloudy, rainy day and a bit cool. They chose to wear cotton gloves but many of the others did not. They didn’t want to take the chance of ­getting all scraped up by the fishes’ teeth.

As they walked the Salt Creek they would check out the holes as they went. “They have set holes they check a couple of times a week,” says Josh. “They’ve been on the river so many times, they know where to look. Sometimes a guy would be crawling along with a short stick checking holes and immediately be submerged, then pop up and yell ‘here he is.’ Everyone would come running to help.”

“We were definitely the greenhorns of the group,” says Steve. “But they would help us out and didn’t laugh at us or anything.”

“I felt the fish when it was underwater and it was weird,” Josh remarked. “I couldn’t really tell it was a fish until it was pulled out. And, you could hear it sometimes when the fish ‘bit.’ On a big one, it was like a loud thump you could hear above water.”

“Catching the fish was a coordinated effort,” says Steve. “Sometimes we caught fish the guys said were too small because they were maybe three to five pounds. We are used to rod fishing so they seemed to be a great size to us! Seemed odd to be throwing back that size.”

“These guys were really great,” says Josh. “They kind of reminded me of Duck Dynasty – really great, down-to-earth guys.”

Hoggin’ is only legal in 13 states, including Illinois, and is much more common in the southern United States. Some believe that is because the catfish are grabbed from their nests, leaving their eggs ­vulnerable. Each state has its own regulations on the size and ­number you can catch. Regarding hand fishing in Illinois, you should have a sport fishing license, but there is no limit on flathead catfish.