The Emiquon Preserve is just what the doctor ordered 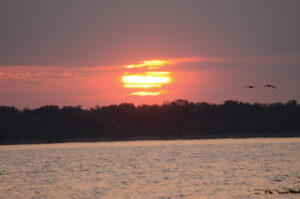 I had been chasing the ­sunrise for a few minutes now. The sky had already turned a ­beautiful tangerine color so I knew that it was only a ­matter of minutes before the fiery ball of orange would break the ­horizon. I had no other ­reason to be in a hurry other than ­seeing the sunrise as it came up over the Illinois River and into the Emiquon Preserve.

Nestled along the Illinois and Spoon Rivers in the central part of the state, the preserve is a gold mine for outdoors starved ­residents of Illinois. In a state where over 95 ­percent of the ground is privately-owned and ­public ground is at a ­premium, Emiquon Preserve is indeed what the ­doctor ordered.

An area that is rich in history and has run the full extent of extremes, this area is returning to what it once was. Originally being Flag and Thompson Lakes many moons ago, they were drained and would become Norris Farms where a large cattle operation took over. After several years under that operation it was bought out by Wilder Farms and a number of changes occurred.

The Nature Conservancy had ideas about ­purchasing the land and returning it to what it once was. Soon small tracts of land were obtained and their dream of the return of the lakes began taking shape. Soon enough over 7,000 acres of the agricultural land was purchased and the Emiquon project was on the way.

The sun came up and filled the watery canvas with lovely light. I was to meet a group of birders who were coming to enjoy the plethora of bird life in the area. With ample parking, footpaths, boardwalks, and ­lookouts, Emiquon is indeed birdwatcher friendly.

Within minutes we had already spotted Pelicans, Bald Eagles, Least Bitterns, Cormorants, Common Gallinule and Caspian Terns. But this was only a tease as to what lay in the wet world around us.

Soon the migration will be under way and ­numerous waterfowl species and wading birds will begin ­showing up. Highlights of the past have been Red-Throated Loons, Western Grebes, White-Faced Ibis and the list goes on.

When the Snow and Blue Geese head our way they will make Emiquon one large noise-filled arena. Thousands upon thousands of the geese will stopover for several days and it is a sight to behold.

While birdwatchers gather, so do fishermen as they search out a wide variety of species that inhabit the lake. Bass and ­crappie are the most targeted species however. Only boat fishing is allowed here and in order to try and keep the lake as pristine as possible only trolling motors are allowed, and by that I mean no outboard motors are even allowed on your boats. This is a wide open lake so tiny breezes can push at you hard. Many fishermen have back-up trolling motors and an extra battery. Be prepared to work at it if the wind does come up.

You must obtain a free fishing permit from nearby Dickson Mounds to fish the lake. On a side note this permit system might change if the budget woes of Illinois continue as the possibility of closing down Dickson Mounds looms on the horizon. The talk of closing Dickson Mounds altogether, no matter what the budget outcome, has also been discussed. In either case it is a sad deal. There is so much history at the museum and closing it will just leave an empty spot.

There is also limited waterfowl hunting in the area. The U.S. Fish and Wildlife Service offers ­regulated hunts on a limited basis. You can head to their ­website to find out details.

As outdoors people in Illinois we are hungry for public land. Emiquon is just a small slice and should be enjoyed. I cannot do it justice in writing, for there is not enough room. It is a place that needs to be ­visited in person. It is a people friendly outdoor place, a place for the entire family. For more information go to www.experienceemiquon.com.

Kevin Wright is a freelance nature writer and wildlife photographer working out of Canton, Ill. His email address is wrightsrca@prodigy.net.