Life on the line

On May 8, 2018, line personnel from Shelby Electric Cooperative (SEC) had an ordinary safety training session. Pole top rescue training involves a 200-pound dummy situated at the top of a utility pole, and the lineman needs to get it to the ground safely to perform any necessary Red Cross life-saving skills of first aid and CPR.

This simulation helps linemen prepare for a situation if a fellow lineworker needs help. On this day, the safety training session turned into a real-life rescue mission when Kevin Carlen, forestry line foreman, suffered a sudden cardiac arrest at the top of the pole.

His fellow co-workers and safety instructor immediately sprang into action. The actions that these men made ultimately helped save Carlen’s life. Because of their quick response, the 14 men involved were recently awarded the American Red Cross Certificate of Merit, which is the highest award given by the organization.

On the day of the incident, Thad France, the Association of Illinois Electric Cooperative’s (AIEC) manager of lineworker and apprentice development, was instructing the SEC line personnel. “We had probably gone through seven or eight guys,” he says. “Kevin went up and actually did well.” 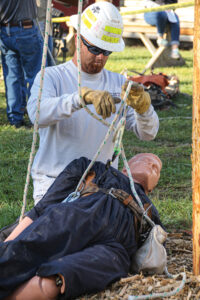 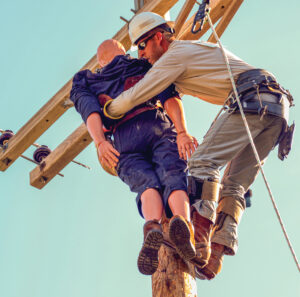 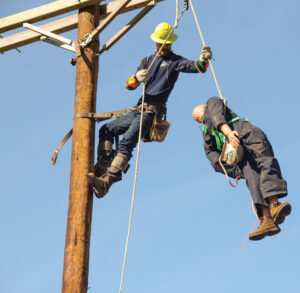 Lineman Cary Bryson was in the bucket truck resetting the course. “[Carlen] went up and did an excellent job,” he says. “He helped me hang the dummy, and I was moving back to get out for the next guy. Somebody yelled… I looked down and Kevin was leaning back.”

Carlen’s safety gear held him securely to the pole, but he was unresponsive. His legs were kicked out of the pole, his arms were dangling, and he was bent over backward.

“I went over to the pole and started yelling his name,” France says. “I noticed [Carlen] was making a gargling sound. I first thought he was choking on something. Then I saw the color of him… I knew something was pretty bad.”

“There was just a second or two there of almost disbelief of what was happening, and then instantly all the guys around jumped in,” adds Brian Chevalier, construction superintendent.

Being in the bucket truck, Bryson got to Carlen first and was able to quickly wrap a rope around Carlen as Nick Dunaway, lineman, climbed the pole to assist. Several other men got into position to help bring Carlen down with the handline.

“It was a scary deal,” lineman Adam Schrock says. “When we first went to lift him up, I could hear the last breaths coming out… It was a little frightening. I first thought we were injuring him worse.”

Lineman Nick Sloan called 9-1-1 and ran to the road to await the ambulance, and lineman Jake Kull ran to get an AED machine. An AED, or automated external defibrillator, is a portable device that helps during a cardiac arrest. It provides instructions and delivers an electric shock to re-establish a normal heart rhythm.

In the meantime, Carlen was brought safely to the ground and lineman Jerry Johnston started performing CPR until the AED arrived. Johnston then followed the instructions and the AED gave Carlen his first shock. When the EMTs arrived, they replaced the AED with a machine of their own and said Carlen’s heart was stable.

“I never felt relief like that before,” France says. “It was just the most unusual feeling I ever felt.”

Because these men were well-trained, their instincts kicked in. Everybody knew exactly what to do and worked well together to save the life of a fellow lineworker.

“It was a terrible situation, but it couldn’t have happened in a better place,” Chevalier says. “All the guys were around, trained. It was just a reaction. Everybody jumped in and grabbed a job and worked together.”

Although these men helped save a life, they don’t consider themselves heroes. “We don’t look at it that way,” France says. “What we look at is we did our job… Everybody worked together, everybody picked a job, and everybody just got it done. The outcome, [we] allowed this guy to be able to see his wife and be able to see his kids. It just puts things in perspective.” 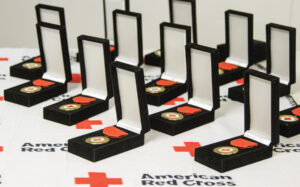 According to the American Red Cross, the Certificate of Merit is one of three awards given in its lifesaving awards program, which has roots dating back to 1911. This program has awarded more than 330 individuals who have all played a role in saving more than 140 lives. The certificate is signed by the honorary chairman of the American Red Cross, U.S. President Donald Trump.

“I truly believe a real hero is the man that continues to fight even when he is scared,” Morris says. “As I think back to May 8, 2018, I cannot even fathom the emotion around every one of you at that moment. Because of your quick and calm thinking, Kevin Carlen lives on and is with us today. I hope that through this story, we can learn the importance of CPR and first aid training.”

Today, Carlen is doing well. He even helped present the awards to the 14 men who helped save his life. “I’m glad we have such a good group. They’re my brothers,” he says. “As the saying goes, ‘I’m my brother’s keeper.’ And they performed that task perfect.”

For the full story of the pole top rescue, visit icl.coop to watch a video by Paul Dow, coordinator
of video productions at the Association of Illinois Electric Cooperatives.

To learn more about Certificate of Merit and other American Red Cross awards, go to LifesavingAwards.org.

For training on first aid, CPR and AED, visit redcross.org for details. 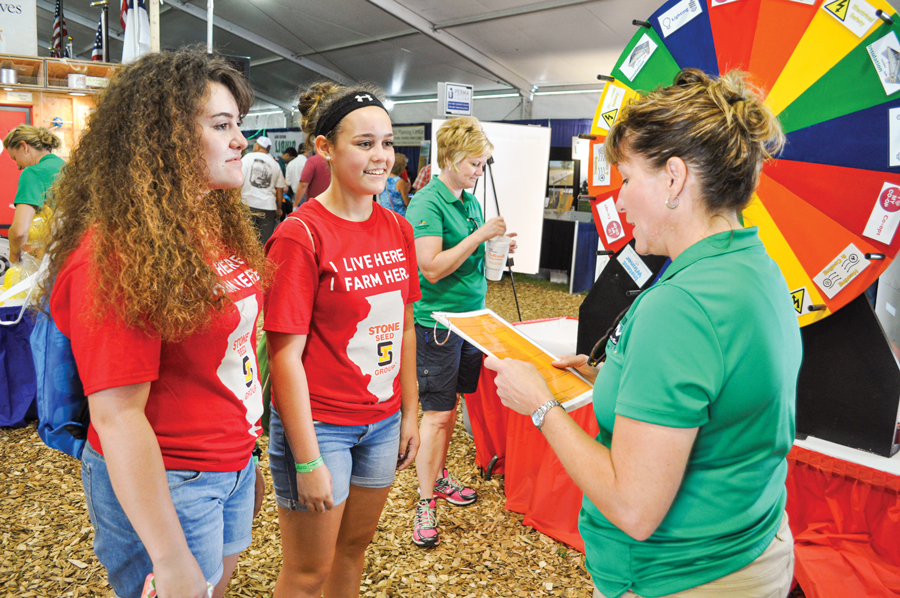 Farm Progress Show is back in Illinois 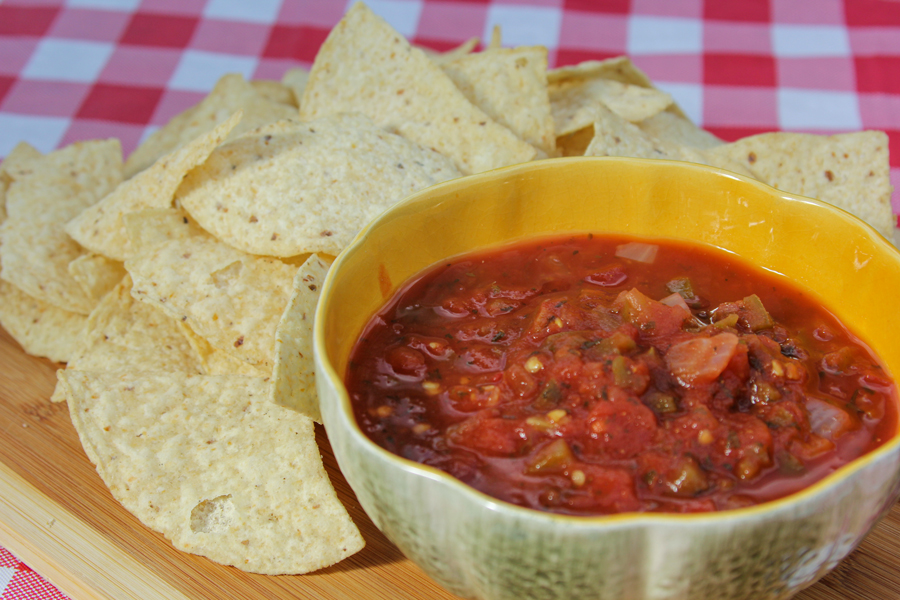 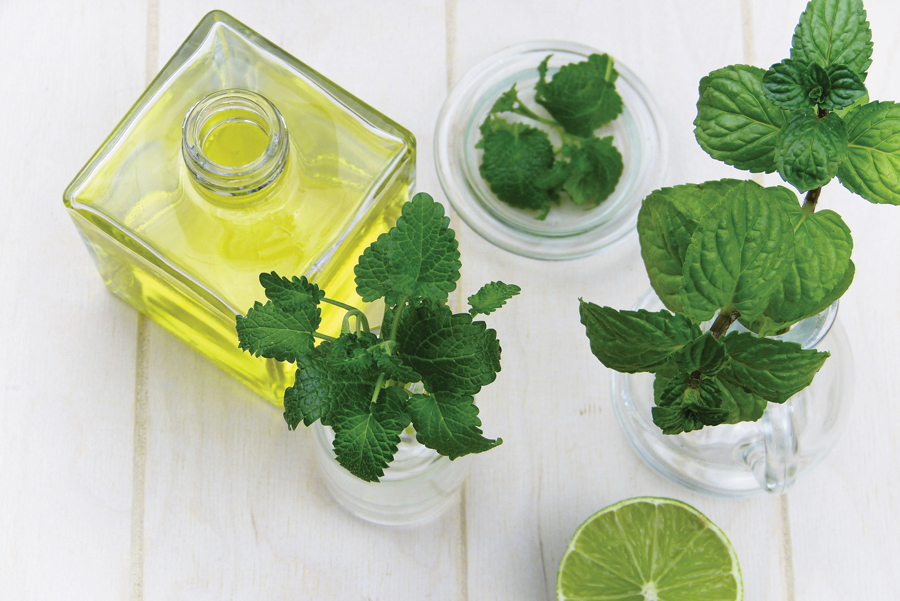