Seventy-five years ago, on May 20, 1943, the first issue of a magazine produced by the Association of Illinois Electric Cooperatives (AIEC) was published, only the second of its kind. Known as the Illinois REA News, The Voice of 58,000 Members, it was and continues to be the voice of rural Illinois.

The original publication had a newspaper format and its introduction to rural electric readers explained its purpose was to advance and protect the Rural Electrification Association cooperative movement in Illinois. That first issue encouraged cooperatives to make “Illinois REA News a voice of thousands of Illinois farmers – and such a voice can be heard in the halls of Congress, in the state legislature and in your own communities bringing your message and expressing your views for the everlasting value of the REA program.”

In 1943, our country was in the midst of World War II, and the REA movement had slowed due to a shortage of building supplies. However, the country was hopeful there would soon be an end to the war, and Congress continued to appropriate funds to expand the rural electrification movement. Expectations were high for the rapid development of cooperatives once our men returned home, 40 percent which were from farms.

The Menard Electric Cooperative offices served as the headquarters of the statewide association and REA News. It was determined that the most up-to-date news would come into the statewide office and the magazine would be there to report on issues of utmost importance to its rural members. National and state news came to the desk of the statewide coordinator where it was assembled and edited for the benefit of all cooperatives.

Columns about safety, both in the home and regarding electricity, were included in the magazine along with regular editorials, homemaking tips, drawings and photos of devices farmers could build to make their jobs easier, recipes, pen pals, and clothing and household patterns.

In September 1953, the magazine was renamed Illinois Rural Electric News and five years later changed from a newspaper to magazine format. In 1996, the publication became known as Illinois Country Living and today is delivered to 189,000 member homes from 20 Illinois co-ops. 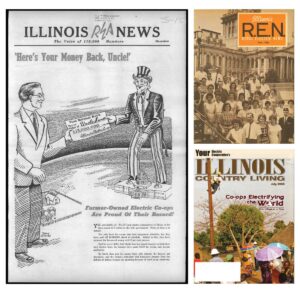 Looking back on that first issue, it was interesting to note that many topics of interest to rural cooperatives and their members in 1943 still resonate today. Rural issues played an important part of the educational information in the magazine then and now. Seventy-five years ago, farmers were trying to produce more food for the war effort and find innovative ways to use salvaged materials to build their own hay hoists and other devices to make farm work a bit easier, since many of their farmhands were in the war. Today, farmers and agriculture are at the forefront of feeding the world. While many farms were still without electricity in 1943, farmers today are interested in how rural broadband can change the way they do business.

The Illinois REA Safety and Job Training program was one of the first of its kind in the U.S. and drew national interest. In July 1941, only five Illinois REA employees had American Red Cross First Aid training, and today that training is offered to all employees at every cooperative in the state. Ongoing safety training for linemen has proven to be of great value. Nationally, in 1943, an alarming total of 93,000 persons had been either killed or seriously injured in accidents. REA promoted safety programs for members and employees helped to educate them on how to take measures to prevent accidents on the farm and by REA employees. Today, the occurrence of these types of accidents have dropped significantly.

Editorial comments in our first issue stated, “The private utilities for years scorned this rural market for electricity, preferring to skim the cream from the urban areas. But when the federal government under the New Deal began to take steps to make electric current available to farmers, the private power trust played dog in the manger and fought the program all the way through. Pres. Roosevelt recently paid tribute to the REA and its work in these words: ‘The extension of electric service to a million farms was an important step in preparedness for ultimate victory…As the wartime strain on manpower grows, the nation for use in war or peacetime activities, will realize ever more clearly how much the rural electric co-operatives have added to its strength.’ The Capital Times.”

In the early years, it involved spite lines being built so that cooperatives couldn’t build lines to the farms that wanted electricity. Over the years it has changed, and today’s challenges include territory disputes and what regulations should apply to not-for-profit cooperatives. 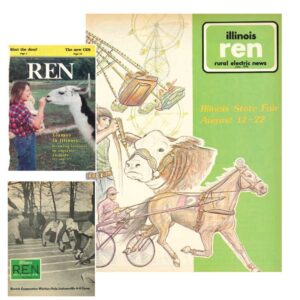 Illinois Country Living is devoted to telling the story of rural Illinois. Those of us involved in it are devoted to keeping members informed about industry issues while also promoting rural stories from across the state. It is part of helping to fulfill the cooperative principle of providing information, education and training to members.

However, it is more than just news of the electric industry; the magazine contains features about people, places and things we believe would be of interest to our readers. We’ve highlighted a WWII veteran who was on Iwo Jima, a triathlete blind since birth, women in agriculture, and mothers and fathers of the year nominated by our readers. We have looked for opportunities to raise awareness of rural businesses and the ways Illinois electric cooperatives have helped bring electricity to areas unserved around the world.

Along with recipes, we have begun showcasing Illinois diners and food establishments in our Taste of the Prairie monthly feature and have continued informative articles on safety, energy efficiency and gardening. Additionally, your participating cooperative includes pages of interest to you, its members.

Unlike 75 years ago, you can now search for back issues, old recipes and information on our website at icl.coop and follow us on Facebook. While many enjoy looking for information on technology, one thing remains true – we are a print magazine. Our readers enjoy reading each issue and we appreciate that loyalty.

Illinois Country Living may have had a number of editors over the years, but all have considered it an honor to tell the cooperative story. We know it is your story we are telling, and your communities and businesses we are promoting, and we wouldn’t have it any other way. 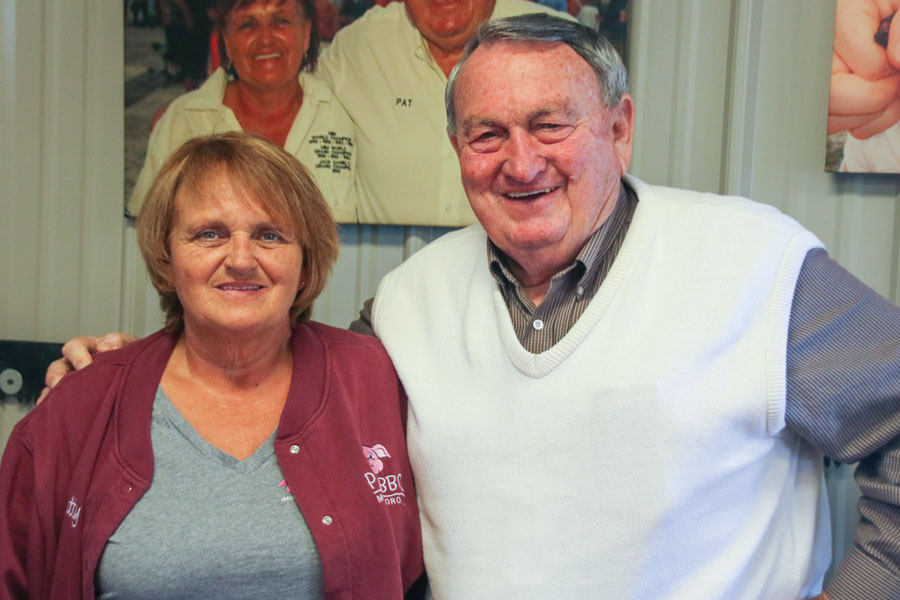