Nineteen percent of Guatemalans don’t have access to electricity, according to NRECA International. Those living in Tierra Blanca Chixoy, a village located in north-central Guatemala, are no longer part of that statistic thanks to 12 linemen from electric cooperatives in Illinois, Iowa and Wisconsin.

Electric co-ops from the three states worked together as “Partners for a Brighter Tomorrow” to make the Guatemala electrification project a success. This project provided power to 42 homes, a school, a church and a health post. It was made possible by NRECA International, a non-profit 501(c)(3) charitable organization, whose mission is to increase individual and community access to electricity in all parts of the world.

“I’ve never been out of the [U.S.], so it was a great opportunity to see another part of the world and help people,” says Austin Aschemann, apprentice lineman at Adams Electric Cooperative in Camp Point. “I helped people that I never thought I’d be able to [help]. I’m very thankful for the opportunity.”

The other linemen share the same sentiment. “I wanted to make a difference in a part of the world that doesn’t have electricity … and help the kids have a better life,” says Mark Schaley, area serviceman at Corn Belt Energy Corporation in Bloomington. “It’s like going back in the ’30s and ’40s, the way they live. I can’t believe people still live like that.”

According to NRECA International, more than half of Guatemalans live below the poverty line. The families in the village live in huts with dirt floors. Despite the heat, fires burn in the homes all day to reduce insects. There’s a stream alongside the village used for laundry, bathing and drinking water.

“I knew there would be a certain level of poverty, but they don’t have anything,” Aschemann says. “They don’t have running water or utilities in the house. You see pictures online … but until you experience it, it’s a whole different level. But they’re very happy people. They’re always smiling.”

The lineworkers did notice how hard the locals work. “It takes a village,” says Ralph Bowersock Jr., journeyman lineman at Norris Electric Cooperative in Newton. “The women are doing the washing, they’re cleaning, they’re taking care of things. The men are in the fields cutting corn, bringing the corn and shelling the corn. But it takes a village, and they all work.”

“We’re lucky enough to have the conveniences we have in the U.S.,” adds Shannon Davis, serviceman at Tri-County Electric Cooperative in Mt. Vernon. “To see people in need, [the project was] a great opportunity to give back to their community. … The people of the village were excited and appreciated us being there. It was fun to watch the kids and see the excitement when we came in.” 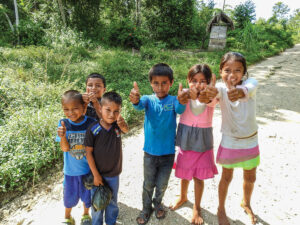 The village is home to more than 60 schoolchildren, ages 7 to 14, and they were always around. They followed the lineworkers everywhere and supervised the progress. The kids eventually learned that a thumbs-up means “good,” and the linemen started receiving a thumbs-up wherever they went.

One of the roughest parts of the project was the heat. Most days, they worked in 90-degree heat with 90 percent humidity.

“The heat is one thing that we weren’t expecting,” says Aschemann. “We knew it would be warm, but the level of heat and intensity … it took a lot out of us.”

According to the lineworkers, the heat was unbearable at times and the humidity made it hard to breathe. They had to watch out for each other to make sure everyone took breaks to cool off. On top of the heat, all the labor had to be done by hand. The linemen were used to working with state-of-the-art equipment and trucks in the U.S., but those luxuries weren’t available in Guatemala.

“We had to do everything the old-fashioned way,” Schaley says. “No trucks … we had to climb everything. … We struggled through the heat, but at the end of the day, [this project] is good for the kids.”

While the lineworkers battled the heat during the 3-week project, it was easy to work with each other.

“Something that surprised me is how well the guys meshed and how well the project went with the extremely rough conditions,” Davis says. “We had a good group of guys that made the rough project enjoyable and go smoothly.”

“It is unreal that you can put 12 guys who didn’t know each other in one spot and be able to work together,” Schaley adds. “We worked hard and worked ahead of schedule. It is just an awesome feeling being able to do that.”

For the duration of the project, the linemen worked with Guatemalan lineworkers from EMRE, which provides electric service to the municipality of Ixcan. The electric utility began to expand service to rural areas several years ago. One roadblock between the two groups of lineworkers was the language barrier.

“As far as doing line work, we can work hand-in-hand,” Bowersock adds. “It takes a minute. There’s usually a lot of smiles and jokes involved once we figure out what we’re talking about. It’s the same, it’s just different words, a different language.”

However, the lineworkers did have help with communication. “We had some great translators that we could reach out to any second,” Aschemann says. “I just wish that we could’ve spoken to them. I wish I knew their language, and I wish they knew ours.” 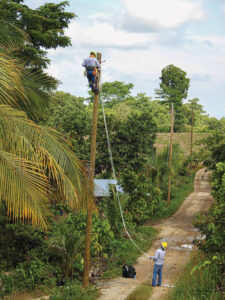 According to the lineworkers, having electricity will make all the difference in the village.

“Having electricity will change their lives … they won’t have to light candles every day, they can get a microwave, and they can get a fridge or freezer, if they’d like, and have a few modern conveniences that we use every day,” Aschemann says. “They will be able to have power for the first time, and just knowing that is going to change their lives forever, helps me. This village will continue to grow and hopefully do great things with what we’re doing here for them, and that’s a great feeling.”

The lineworkers were able to complete the project a few days early and were grateful for the opportunity to help people in a different part of the world. Before they left the village, the lineworkers made sure each home was equipped with an Ecofiltro, a 5-gallon bucket with a spigot that filters water, and all the kids were gifted shoes, toys and backpacks full of school supplies.

“We are helping them, but we take more out of it than what they’ll ever get,” Davis says. “Our companies that sent us down there, [the electric co-ops] and the state associations, have given us more by allowing us to see how they live and be able to help in the situation.”

“People need to be humble,” Bowersock says. “It’s a hard life if you don’t have power at your fingertips.”

“These projects are going on all the time, and it’s a great thing to be behind,” Aschemann says. “We don’t even think twice about using a microwave or turning on the light switch, and they don’t have those things. These people are happy with their lives, and they are going to get even happier with the modern conveniences that we are so used to.”

“It is a really good project, and I hope it keeps on going,” Schaley adds. “There are still people out there who don’t have electricity, and they need it.”