The story of Free Frank McWorter, founder of New Philadelphia

About four miles outside of Barry, on Pike County Highway 2, a small pavilion on several acres of tall grass dotted with 14 markers indicates the site of New Philadelphia, the first town in America founded by an African American.

New Philadelphia’s existence was brief, but it looms large in the history of Illinois and our nation. That it ever existed is a testament to a man who embodied so much of that enterprising spirit we think of as American, even as his country denied him the full rewards of citizenship.

Frank McWorter was born in 1777 in what is now Union County, S.C. His mother was Juba, a West African slave belonging to George McWhorter, who is assumed to be Frank’s father. Little is known of Frank’s early years, but McWhorter had a small farming operation and owned a few slaves.

In 1795, George McWhorter moved from South Carolina to Kentucky, taking 18-year-old Frank with him. In 1798, McWhorter acquired 170 acres in the newly formed Pulaski County. A year later Frank married; his bride, Lucy, was the slave of a neighbor. Slave marriages had no legal standing, but Frank and Lucy would eventually wed in 1835 as free citizens of Illinois. (When asked if he would live with, support and cherish his wife, Frank replied, “Why, God bless your soul, I’ve been doing that very thing for the past 40 years.”)

Slave owners in farming areas like Pulaski County realized additional capital by hiring their slaves out to other farmers. Enterprising slaves could hire out their own time, negotiating a yearly price with their master for a specified amount of time and then hiring that time out to others. Any money earned above the obligation to their master was theirs.

Frank was hired out in the community, and by 1810 he was hiring out some of his own time and developing a saltpeter operation. About this time, McWhorter left Pulaski County for Tennessee, leaving Frank behind to manage his property and continue his own saltpeter business, a clear indication he trusted Frank’s judgement as well as his integrity.

The War of 1812 increased the demand for gunpowder; as a result, the price of saltpeter, a principal ingredient, soared, and Frank’s business thrived. In 1817, he purchased his wife’s freedom for $800, ensuring their future children (13 had already been born in slavery) would be free.

George McWhorter died in 1815. In September 1819, at age 41, Frank bought his own freedom from McWhorter’s heirs. The importance he attached to this is reflected in the 1820 census, where he is listed as “Free Frank.” (He would not legally become Frank McWorter until 1837, when Illinois enacted the McWorter Law, designating him as such with legal rights, except the right to vote.)

Free Frank continued to live in Pulaski County and prosper. An 1822 surveyor’s plat shows the purchase of 50 acres “in the County of Pulaski and on the headwaters of Fishing Creek.” By 1828, he held several hundred acres, but the rights of a free black in a slave state were not guaranteed. So, between 1828 and 1830, Free Frank either traded for or bought (sources disagree) land in Pike County, Ill. Technically a free state, Illinois was still not free of racism, since many of its settlers came from southern states, and the Illinois Black Code of 1829 actively discouraged blacks from settling
in the state.

In September 1830, Free Frank, his wife Lucy, and Frank Jr., whose freedom Frank had secured by trading his saltpeter operation, and three of their other children began the 500-mile journey north to west central Illinois. Three others, Juba, Sally and Solomon, remained in slavery. In addition to the usual hazards of travel, including bad roads, disease, injury and robbery, free blacks had to guard against slave catchers, who could destroy their papers and sell them down the river to the cotton, rice or sugar plantations of the Deep South. 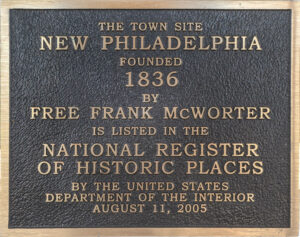 Free Frank and his family reached Pike County in the late spring of 1831. By 1835, he was prosperous enough to return to Kentucky and purchase the freedom of his 20-year-old son, Solomon. Subsequent trips in 1843 and 1850 bought freedom for daughters Sally and Juba. Later, in his will, he left funds to purchase freedom for many of his grandchildren. Free Frank would ultimately be responsible for the freedom of 16 family members at the cost of more than $500,000 in today’s dollars.

In the fall of 1836, he had 42 acres adjacent to his original farm surveyed and platted for the town of Philadelphia (also known as New Philadelphia). The town flourished in the period before the Civil War, attracting both black and white residents and becoming a known “station” on the Underground Railroad.

New Philadelphia was at its most prosperous and populous in 1854 when Free Frank passed away at the age of 77. Following the Civil War, the population decreased. New Philadelphia lost its town status in the 1880s and reverted to farmland over subsequent decades.

Without the persistence and dedication of Free Frank’s descendants and local historians, New Philadelphia might have been lost to memory. Free Frank’s great-granddaughter, Thelma McWorter Wheaton, managed to save some of the family papers, and in 1981, another great-granddaughter, Helen McWorter Simpson, published a book on the family. In 1983, great-great granddaughter Juliet Walker published a biography of Free Frank, and in 1990, she heightened awareness by walking his route from Pulaski County to New Philadelphia.

In 1998, local citizens and several of Free Frank and Lucy’s descendants founded the New Philadelphia Association and began to seek more recognition. In 2005, based on archeological significance, the site was listed on the National Register of Historic Places. In 2009, it was designated a National Historic Landmark, and in 2013 it was included on the National Park Service National Underground Network to Freedom Program. It is currently under consideration for designation as a National Park.

Although New Philadelphia faded away, it remains significant as the first town in America founded by an African-American proprietor and as a community that practiced racial harmony at a time when subjugation and segregation were the rule. As for its remarkable founder, Free Frank McWorter, Marynel Corton, New Philadelphia Association board member, summed him up this way: “Frank is an example of freedom and American democracy at its finest. He pulled himself out of slavery, became a productive citizen, established a community that was truly integrated and set an example for all of us today.”

An Archaeology of Race in the Heartland, Paul A. Shackel, University of California Press, Berkeley, 2010