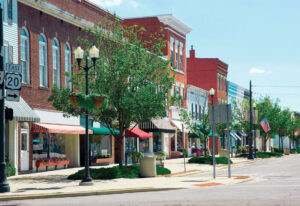 A main street in a typical midwest small town, complete with U.S. flags.

Rural America’s finances improved a bit in 2017, but it’s far from a healthy picture according to Creighton University’s Rural Mainstreet Index which rose 11.4 ­percent from December 2016 through December 2017. The monthly index surveys bank CEOs in rural areas of 10 states.

For the period from November 2017 to December 2017, the index edged up from 44.7 to 47.8. That’s still below the growth neutral point of 50.0, but Ernie Goss, ­economics professor at Creighton University’s Heider College of Business, saw the bright spot.

“This is the highest December reading that we have recorded since 2014. Clearly, based on our recent surveys, the negatives are getting less negative,” said Goss.

While just 20.4 percent of bank CEOs reported that their local economy was expanding, that’s con­siderably higher than the 8.7 percent who said that in February 2016.

One of the ­brightest spots in December’s report was the retail sales index which showed significant improvement. It climbed from 40.7 in November to 52.4, which Goss noted is the highest December retail index recorded since 2014.

The confidence index, reflecting expectations for the economy six months out, increased to 51.2 from November’s 40.6. Goss said that indicates an improvement in the economic outlook among bankers, but he noted there is still caution.

Internet is down!
Do radiant barriers really make a difference?
Recognize the best in Illinois.
Evandy’s Boatel
Congress must not lose sight of our core values
Help during the most stressful time of life
Powering up after a winter storm
Orchids: An outstanding indoor plant
A personal journey into heart disease
What’s Hot?