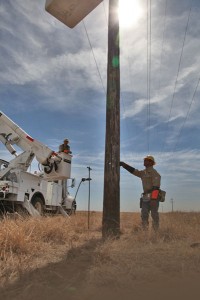 For more than 75 years the electric cooperative business model, when utilized effectively by engaged members, has served as a valuable instrument to improve the quality of life in rural areas. Cooperatives – democratically governed businesses that operate on an at-cost, not-for-profit basis – are unique in their ability to focus on the needs of their members, and not on profits.

Member-owned cooperatives come in many shapes and sizes. Agricultural co-ops, for example, fight for fair prices for farmers while marketing co-ops provide nationally known branding for products. Credit unions lend at competitive rates, while grocery co-ops give shoppers a say in what’s stocked on shelves.

All co-ops, however, boast a common foundation of core principles that puts people first.

Cooperatives are the fabric of your community

Every day, more than 29,200 cooperatives supply essential products and services to American consumers, touching lives in almost every way.

Tomorrow at breakfast, check your morning paper. Many of the articles may be labeled “Associated Press” or “AP.” Those stories were written by individual reporters but distributed by a cooperative news organization.

If your breakfast includes freshly squeezed orange juice, it may be from a Sunkist product. Sunkist is a cooperative formed by California and Arizona citrus growers.

And the list goes on: Land O’ Lakes butter, Ocean Spray cranberry juice, Sun-Maid raisins, Welch’s grape jelly, Nationwide Insurance, Blue Diamond almonds, Ace Hardware, REI outdoor gear—they are all cooperatives. In fact, one out of every four Americans claims membership in some type of cooperative, including 91 million served by credit unions and 42 million connected to more than 900 electric cooperatives in 47 states.

Although many in number, cooperatives differ from “typical” businesses in one big way: they are organized for the benefit of their members, not single owners or stockholders.

“Co-ops are established when the for-profit, investor-owned commercial sector fails to meet a need, either due to price or availability of goods and services,” explains Martin Lowery, National Rural Electric Cooperative Association Executive Vice President, External Affairs and former Board Chairman of the National Cooperative Business Association. “The co-op model works in housing, utilities, and in both rural and urban settings. Co-ops empower people to take control over their own economic destinies. When you’re a member of a co-op, you have a real say in the direction of that business. That’s critical – it helps the co-op rapidly respond to changing conditions. As an example, a number of electric co-ops have branched out into other pursuits beyond electricity to meet pressing consumer and community requirements.”

Beyond just providing power, rural electric cooperatives are committed to improving the quality of life of their rural member/owners. For example, access to water suitable for drinking has been a challenge for many rural parts of the state. Many of the efforts to form water co-ops in rural downstate Illinois have been led by electric cooperatives and their leaders and they continue to assist in those ventures. And, electric and telephone co-ops are in the forefront in efforts to provide rural areas with broadband services. They know that access to high-speed internet is vital to economic development, and to the health, education and welfare of rural areas. The demand for broadband in underserved areas is in many ways similar to that of the demand for electricity in the 1930s, and those same co-ops that were birthed in that movement are the very ones working hard to get broadband to rural areas. Electric cooperatives are also concerned with the environment and are actively working to utilize alternative and renewable energy sources, including wind, solar and hydropower.

Credit unions fought off the destructive cycle of payday loans by creating salary advance loans with low rates that placed part of the borrowing into a savings account helping members escape a cycle of debt.

Marketing cooperatives added food nutrition labels to products long before it was required by federal law.

Membership in a co-op matters because electric co-ops care about improving the quality of life in the areas they serve. From helping to put up lights at a county fairground to hanging barn quilts for a local display or taking donations for a local food bank, co-ops invest in local communities where their members live and work. Directors and employees want to see their communities succeed. Why? The answer’s simple: they live there, too. Local people working for local good.

Membership matters because members have a voice and a vote in how their co-op is governed. Through democratic control, members elect local individuals to serve on their board of directors. Control stays in the hands of fellow members, all of whom have strong community roots. Those individuals on the board of directors, along with those who work for your co-op, are your friends and neighbors.

Membership matters because the co-op’s goal is to provide you with electricity at a price that is as close to cost as possible – that way, more of your money stays in your pocket, up-front. And, if there are excess revenues (called margins), they are returned to members in the form of capital credits based on electric use.

The bottom line: Membership matters because you matter to your electric cooperative — you are one of its owners!

The first known cooperative in the United States was formed by Benjamin Franklin in 1752. That organization, the Philadelphia Contributionship for the Insurance of Houses from Loss by Fire, still operates today.

Most early cooperative development efforts in the United States involved farmers trying to boost their buying and selling power. Of course, not all cooperatives engaged in agricultural marketing. The first irrigation cooperative was organized in California in 1853. By 1857, Ohio and New York had adopted laws enabling the operation of cooperative (mutual) insurance companies. In 1865, Michigan passed what is believed to be the first law recognizing the cooperative business model.

The cooperative movement we know today traces its roots to a set of business guidelines drawn up by Charles Howarth, one of 28 weavers and other artisans who founded the Rochdale Society of Equitable Pioneers in Rochdale, England, on Dec. 21, 1844. The tradesmen had banded together to open a store selling food items they could not otherwise afford, starting out with a meager selection of butter, sugar, flour, oatmeal, and a few candles but soon expanding to include tea and tobacco. Eventually, the enterprise was so successful that the group was able to open a cooperative factory and textile mill.

Open and Voluntary Membership — Membership in a cooperative is open to all persons who can reasonably use its services and stand willing to accept the responsibilities of membership, regardless of race, religion, gender, or economic circumstances.

Democratic Member Control — Cooperatives are democratic organizations controlled by their members, who actively participate in setting policies and making decisions. Elected representatives (directors/trustees) are elected from among the membership and are accountable to the membership. In primary cooperatives, members have equal voting rights (one member, one vote); cooperatives at other levels are organized in a democratic manner.

Members’ Economic Participation — Members contribute equitably to, and democratically control, the capital of their cooperative. At least part of that capital remains the common property of the cooperative. Members allocate surpluses for any or all of the following purposes: developing the cooperative; setting up reserves; benefiting members in proportion to their transactions with the cooperative; and supporting other activities approved by the membership.

Autonomy and Independence — Cooperatives are autonomous, self-help organizations controlled by their members. If they enter into agreements with other organizations, including governments, or raise capital from external sources, they do so on terms that ensure democratic control as well as their unique identity.

Education, Training, and Information — Education and training for members, elected representatives (directors/trustees), CEOs and employees help them effectively contribute to the development of their cooperatives. Communications about the nature and benefits of cooperatives, particularly with the general public and opinion leaders, helps boost cooperative understanding.

Concern for Community — Cooperatives work for the sustainable development of their communities through policies supported by the membership.

These principles are underpinned by six ideals — the so-called cooperative values of Self-Help, Self-Responsibility, Democracy, Equality, Equity and Solidarity. In addition, ICA lists cooperative “ethical values” of Honesty, Openness, Social Responsibility and Caring for Others.

•Around 50,000 families use cooperative day-care centers

•Roughly 1.2 million Americans in 31 states are served by 260 telephone cooperatives

•More than 1.2 million families live in housing owned and operated through cooperative associations