Located roughly in the middle of Interstate 57 in Illinois is Mattoon exit 190B, the quickest way to Burger King – the original Burger King, that is.

Since 1954, well before that other one started, the burger joint at 1508 W. Charleston Ave. has been wrapping double cheeseburgers in wax paper and shaking salt on some of the best fries in the state. Add a lemon or hot fudge shake and any weary traveler will find himself revived with tasty and nostalgic Midwestern goodness.

“Very little has changed on the menu. If it worked all these years, why change it?” says owner Ernie Drummond.

In operation now for 66 years, the burger joint was founded by Gene Hoots. Some folks may remember Gene’s second restaurant, the now defunct Hoots House and its famous broasted chicken dinner.

While Burger King has long been a Mattoon favorite, it wasn’t until 1968 that the use of the same name by the national franchise became an issue. The matter even became a landmark trademark case. To this day, the Mattoon restaurant enjoys first rights to the name and continues to operate with the agreement that the franchise will not locate a store within 20 miles. In fact, the nearest one is 23 miles away in Tuscola.

In homage to Hoots, black-and-white photographs from the early days hang in the remodeled dining room. Hoots retired in February 2015 and sold the company to local businessman Cory Sanders. Hoots died at age 90 in December 2017, the same year longtime employee Ernie Drummond bought the business.

“For the first six months, it was hard to grasp that I was the owner because I kept expecting Gene to pop in and ask what’s the (customer) count,” Drummond says.

Returning guests may recall the wood paneling, but that was torn out about four years ago to make the space more inviting, Drummond says.

Since Drummond took over ownership in 2017, he’s focused on bringing back original menu items and cooking methods. Although “it took some digging around to find it,” the pork loin sandwich is back, and every morning a 50-pound bag of onions is specially ground as a sandwich condiment.

The bestsellers are the cheeseburgers, including the bacon double cheeseburger. Each one is still wrapped in wax paper and then popped into a white paper bag.

Drummond’s life with Burger King has a history in itself.

He fondly recalled his father taking his family out for dinner and buying a bag of 12 burgers with everything. “Back in those days, that meant mustard, pickle, onion. I remember that well because I’m a ketchup guy. But all six of us always found a way to eat all of those burgers,” he says.

To this day, the restaurant sells burgers and fries by the bag, called the family pack. For example, four cheeseburgers with one pound of fries goes for $14 and change on the menu. 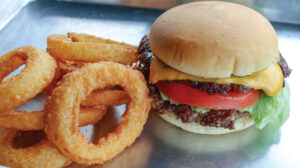 Cheeseburgers are the outright favorite. They are even offered by the bagful. The onion rings have a reputation, too. 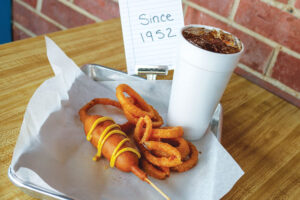 These battered and fried hot dogs on a stick are called Pronto Pups, another menu favorite. 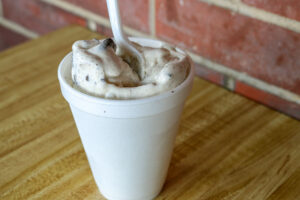 Burger King has so many frozen treats that they have their own menu board. The lemon and hot fudge shakes are top sellers. 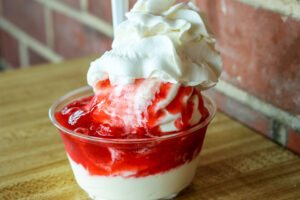 Soft-serve sundaes are available in a variety of options, including strawberry.

By the time Drummond was 16, he was flipping those burgers part-time. He later met his wife Polly there and became the restaurant manager, a position he held for more than 25 years. He and Polly still work there, along with his sister, brother, a nephew and cousins.

High school and college students remain a favorite staff hire for Drummond, many of them staying with the restaurant through their college years. He calls them “the backbone of the business.”

Today, the store employs 30 to 38 depending on the season, and Drummond reports that it competes well against burger chains.

“This place really has a life of its own. I want to try to preserve it somehow.” 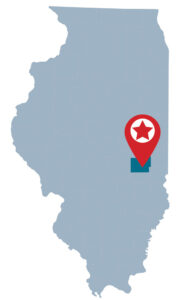