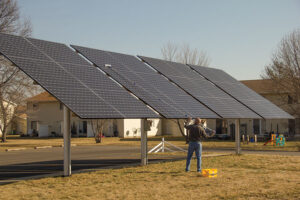 Electric co-op leaders agree with parts of the President’s ­climate change plan announced in June, such as modenerizing the electric grid and increasing the use of renewable energy from systems like this solar system owned by the Association of Illinois Electric Cooperatives. But they disagree with the ­carbon standard mandates that could raise rates an estimated 41 percent over the next eight years.

In June President Obama announced a broad new ­federal mandate to reduce greenhouse gas emissions from electric power plants. The President will instruct federal regulators to apply the Clean Air Act to carbon dioxide issued from power plants. Mark Irwin, Director of the Center for Clean Coal Technology Research, Purdue University, says the President’s plan has the potential to increase rates by 41 percent over the next eight years. Rural and low-income Americans already spend dispropor­tionately more on energy than others. For example, households with incomes between $10,000 and $30,000 already spend 24 percent of their income on energy consumption according to America’s Power.

“Not-for-profit, consumer-owned electric ­cooperatives are about keeping electric bills affordable and stable, and finding ways to improve our members’ ­quality of life,” said Duane Noland, President/CEO of the Association of Illinois Electric Cooperatives. “The electric ­co-ops of Illinois agree with some of the major points in the President’s plan that address energy efficiency ­improvements, modernizing our electric grid, setting higher goals for renewable energy and investing in development of new energy solutions. These proposals could help reduce energy costs. We respectfully, but strongly, disagree with the portions of his plan that will raise our members’ rates. We look forward to working with our nation’s leaders to make sure that keeping electric rates affordable for consumers is a high priority as we work to improve our nation’s energy policy.”

Ask Ed
Grand gardening ideas for August
Working together for Illinois
The attic is still hot
Where there’s smoke … There might just be a festival!
Telling fish stories
Counting your blessings
Home wiring health check