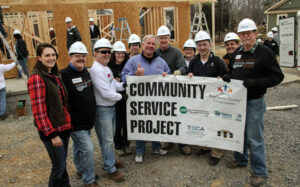 On March 1, more than one hundred volunteers from Touchstone Energy (TSE) electric cooperatives across the country participated in a project to build two energy ­efficient Habitat for Humanity homes in Fairview, Tenn.

Volunteers from 35 co-ops arrived in Nashville prior to the start of the National Rural Electric Cooperative Association’s (NRECA) 2014 Annual Meeting on March 3. They built one home from the concrete slab and finished a second home. While the volunteers hold a ­variety of jobs at their co-ops, in general they have a higher than average skill-level in wielding caulking guns and installing insulation. Those who couldn’t caulk walked the neighborhood handing out Touchstone Energy’s “101 Easy Ways to Save Energy and Money” to the neighbors.

Jo Ann Emerson, CEO of the NRECA, was one of the volunteers. “It’s a privilege for me to work alongside so many dedicated co-op volunteers,” said Emerson. “A concern for community differentiates not-for-profit, member-owned cooperatives from other utilities, and for us today that community is Fairview. We’re not only going to be building houses, we’re going to be spreading the message about energy efficiency.”