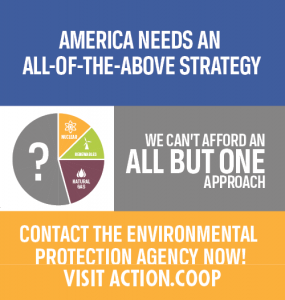 Illinois’ not-for-profit electric ­cooperatives work very hard to provide their members with elec­tricity that is safe, reliable and affordable. Co-ops support an “all-of-the-above” energy strategy, one that incor­porates coal, natural gas, nuclear and ­renewable energy to generate power. While this strategy was endorsed by President Obama in his January 2012 State of the Union Address, the U.S. Environmental Protection Agency (EPA) was subsequently directed to issue-proposed rules that will ­virtually eliminate coal from this equation for new power plants — resulting in an “all-but-one” policy. And, expected follow-up proposed rules on existing power plants, if adopted, will likely result in substantially increased power costs for our homes and businesses.

The background is as follows: On January 8, 2014, the U.S. EPA formally published proposed rules that would set stringent limits on carbon emissions from new power plants and opened up a 60-day comment period for feedback. While electric ­cooperatives understand the environmental concern, these rules would rely on the use of carbon capture and storage technology, a technology that is both expensive and unproven at a power plant scale. This essentially eliminates coal as a potential fuel source. Additionally, the rules on new power plants will trigger a legal requirement under the Clean Air Act to set new standards for ­existing plants as well, a measure that will have a direct economic impact on ­cooperatives and their member owners.

Electric co-ops are dedicated to a cleaner environment as part of their commitment to the communities they serve. Our member ­generation and transmission cooperatives currently produce power from a wide variety of sources including solar, landfill gas-to-energy, anaerobic digesters, hydro, wind and natural gas power ­projects. Having said that, the vast majority of our co-op power production remains coal-fired, ­traditionally the most cost-effective and ­reliable source. New EPA regulations ­eliminating coal from the mix will mean higher energy costs.

We’ve seen this “all-but-one” policy before in our country’s recent history. Concerned about natural gas supplies, Congress passed the Fuel Use Act in 1978 which prohibited burning natural gas to generate electricity. As a result, co-ops invested heavily in coal-based generating plants in the late 1970s and early 1980s to meet ­growing demand for baseload power. Nine years later Congress repealed that Act.

Cooperatives nationwide have investigated the carbon capture and ­storage technology (CCS) as a way to reduce carbon emissions. However, as it stands today, it is not ­economically ­feasible. A 2012 Congressional Budget Office report estimated CCS would increase the cost of producing electricity from coal-based plants by 75 percent.

In a cooperative there are no stockholders to share the burden of cost increases. While we greatly respect EPA’s ­objectives, any cost increases our not-for-profit co-ops incur must be passed on directly to the member-owners.

The EPA is required to take public comments, and I urge you to let the U.S. EPA know that you support a reasonable “all-of-the-above” energy policy to keep electricity affordable. Please visit www.action.coop to share your comments and learn more about U.S. EPA’s proposal. This grassroots effort is critical in keeping electricity reliable and affordable in the future for all of us. It only takes 1 minute to make your voice heard — and to make a difference.