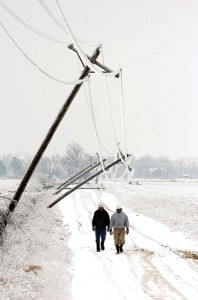 If the weather forecaster says your area could see a foot of snow, you know it’s going to be a mess on the roads. But what if the ­prediction is for ice? Do you know if there will be a power outage? If so, how bad will it be and how long will it last? A new ice storm forecasting tool may help ­provide answers to electric ­cooperatives and others.

In October, Sid Sperry, who works for the Oklahoma Association of Electric Cooperatives, spoke to Illinois electric cooperative ­employees about a new ice storm warning ­program he helped develop along with Steven Piltz, Chief Meteorologist at the National Weather Service in Tulsa, Okla. Together they developed the Sperry-Piltz Ice Accumulation Index (http://www.spia-index.com).

Sperry says the forecasting tool is kind of like the Enhanced-Fujita scale for ­measuring the damage impact of tornados. The new ice index has a scale of 0 for little impact up to 5 for ­catastrophic damage.

Sperry, who has worked for electric cooperatives for 34 years, has seen his share of terrible ice storms. One major ice storm he remembers created ­damage that took 21 days to repair.

Sperry says what many people don’t understand is the impact of the combination of ice ­accumulation and wind speed. Even a lighter ­coating of ice, when combined with high winds, can cause severe damage to trees and power lines. The aero­dynamics of a line will change with ice ­accumulation, causing lift like an airplane wing. With higher winds the line will oscillate up and down in a whipping motion called galloping. This is normally what causes the worst damage during an ice storm.

The goal is to help utilities and other emergency response agencies predict and prepare for major ice outages. “The more time a utility has to prepare, the more time there is to bring in additional materials and linemen to help restore power as quickly as possible,” said Sperry. “I’d love to see a catastrophic 5 be reduced to where the outage time is, say, maybe only a matter of ten days rather than two weeks,” Sperry said.