Twenty-three years ago, Lisa Ward opened a catering business on the square in her husband Roger’s hometown of Macomb. Twelve years ago, at the prompting of her catering customers, she moved her business across the square and opened a restaurant. Magnolia’s Restaurant has three on-site event venues and is located right next door to her husband’s business, the Forum/Two Dogs nightclub.

Magnolia’s is an impressive space, occupying a two-story corner building on the town’s historic square. Exposed brick walls and floor-to-ceiling windows in the main dining room add to its ambience, as does its unique equine décor. Horseshoe coat hooks at the tables and paintings of famous horses like Secretariat and Ruffian adorn the walls. Ward, an avid horse lover, worked as a “hot walker” for horses (cooling them down after a workout) when she was 12 years old to earn money for her own mount.

A glance at the specials for the night provides further insight into the heart behind it all. From beer-battered fried cheese to apple and goat cheese points and Colorado pizza (boasting a cauliflower crust with brussel sprouts, bacon, spinach and three-cheese blend), Magnolia’s menu is eclectic.

Ward’s larger-than-life personality is as much a part of Magnolia’s as the food and atmosphere. Born in Baltimore, Md., she grew up in Birmingham, Ala. As a young adult, she relocated to the Caribbean, but had to be airlifted to Chicago after the devastation of Hurricane Hugo in 1989. It was there she decided to make a new start and eventually met her husband Roger. The influence of these different areas is obvious in the variety of menu items she offers—and in the spin she puts on classic Midwestern entrees. 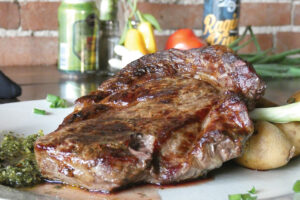 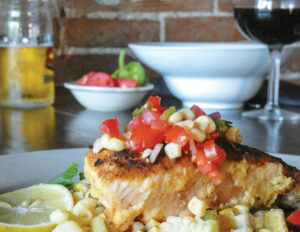 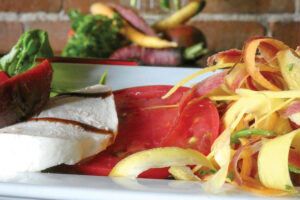 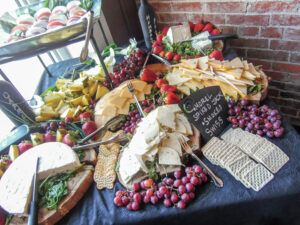 She credits her success first to her husband. Ward often runs menu ideas by him to see if he thinks they will appeal to their customers—though she still puts her own twist on each dish. “He’s a Midwestern boy,” she says. “He’s the reason it works.”

An example is one of Magnolia’s signature dishes, the Chicken Macomb. Described on the menu as sautéed with Midwest sausage and tomato and drizzled with an oregano cream sauce, Ward says it’s “chicken-fried steak with sausage gravy times 1,000.”

Other dishes are named after special people in her life, like the Dottie Salad (field greens, strawberries, goat cheese, oranges, onion and sugared pecans) and Sophie’s Pasta (spinach, mushrooms, goat cheese, tomato and alfredo). The latter’s namesake, a former basketball scholarship student at Western Illinois University, popped in to say hello during our interview.

Another reason for the restaurant’s popularity is Ward’s commitment to charitable causes. Her love for the community is evident in the roles she’s played in fundraisers for Macomb Area Crime Stoppers, “Walking the Runway” for Wesley Village Retirement Center and VIBE (Volunteers Interested in Benefiting Everyone, a group of local business owners).

Her favorite charity event, though, is the Farm to Table Benefit. Years in the making, the fundraising dinner on the streets of the square is truly a community effort. Local business owners including Terstreip Farms, Good Hope Garden and, of course, Magnolia’s, all contribute. It’s her favorite because it benefits Future Farmers of America, and she says the students work very hard to make the early summer event a success.

Ward remains excited about her business. Self-taught, she loves what she does. And the ideas keep coming. She says the menu is inspired by whatever is fresh, ideas from servers, even nursing home submissions, from which she picks winners. She also peruses old church cookbooks, reinventing recipes, some of which are more than 100 years old. The resulting dishes, like rhubarb crisp and corn casserole, are popular among her patrons. “I love the simple stuff. I always want to do more.” She jokes that someday maybe she’ll open a buffet place called “Potlucks,” reminiscent of church dinners of the past.

Magnolia’s caters weddings, banquets, picnics and corporate events. Ward is also a baker; in fact, she makes 101 different flavors of cheesecake. Her peanut butter version is a delicious concoction drizzled with chocolate sauce and powdered sugar.

Other items on the menu to try: Mag’s Slow Roasted Prime Rib with Ward’s signature sauce and the always popular red smashed potatoes. The impromptu sauce originated at a dinner out with family when Ward, bored with the sauce they were serving, added some unexpected condiments from the table.

The now self-proclaimed Midwestern girl tells me she isn’t sure she’s done enough. “I didn’t change the world. I vote, I recycle and I cook steaks,” says Ward. Perhaps she’s making a bigger mark than she thinks. 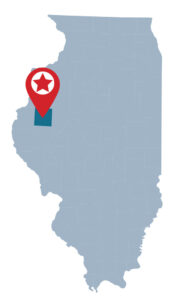 Visit makeitmacomb.com for other things to do while you’re in town.