Kempton Baldridge doesn’t dress like most pastors. He doesn’t wear a formal robe or even a suit and tie. Instead, his attire includes steel-toed boots, a baseball cap and life vest. What Baldridge does isn’t what most pastors do, either. He’s not one to preach from a pulpit or deliver sermons from the front of a church. In fact, he doesn’t have a church building. He’s more likely to be found climbing gangways and riding on tugboats up and down the Mississippi, the Ohio, the Wabash, the Illinois and many of the other rivers of the Midwest. 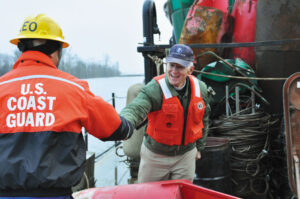 Since 2010 the ordained Episcopalian minister has served as one of three full-time inland waterways chaplains for the Ministry on the Rivers and Gulf Program of the Seamen’s Church Institute (SCI), a New York-based mariners’ service agency. His role is to care for and serve the more than 60,000 men and women who work on tug boats, barges and related vessels on the rivers of the eastern half of the United States. Based in Paducah, Ky., Baldridge is a frequent traveler on the rivers of Illinois, often riding along on a tug.

“My job description says I’m supposed to be underway three days out of every five,” he says. “Sometimes it’s just overnight, sometimes it’s for a week or more.”

Baldridge says he is able to board as towboats dock or has been known to transfer from one vessel to another with the use of a john boat. On board, he looks like many other mariners, except for the black clergy shirt and white Episcopal collar. He goes by the simple nickname of “Chaps.”

“They call me Chaps because my first name, Kempton, would just get me in trouble. It’s too much like ‘Captain.’ Chaps establishes what and who I am and it works. It’s both affectionate and respectful at the same time.”

Every day is different for Baldridge, the son of an inland mariner, and he likes it that way. As a former Coast Guard petty officer and Navy chaplain who served as a chaplain at NATO headquarters in Brussels before joining SCI, he has had his share of formality and routine. On the river, there is none of that.

“No week is the same,” he explains. “The absence of routine is routine. I do my best to come up with an itinerary for each week, but there are always changes and modifications. Some days I wake up in places that I never intended to be.”

He says he is often asked what he does, and explains that it is sometimes easier to explain what he doesn’t do—things like formal revival or church services and group Bible studies.

“People ask me if I hold services onboard,” he says. “My answer is no, not if I want to be invited back. My role is very different than most pastors. I’m not there with an agenda. I’m here to be an empty vessel.”

He said his tasks range from talking with members of the merchant marine and answering questions to offering pastoral counseling. When tragedy strikes anywhere in the Coast Guard’s Ohio district, he is quick to respond in person, offering comfort to family and fellow crew members. For instance, he recently responded when a towboat worker lost his life in saving others who were trapped in a powerless fishing boat which was taking on water near St. Louis in June.

“It’s a privilege for me to be with these crew members and link arms with them following such a tremendous loss,” he explains. “To be permitted to be there and to help each of them take the first few steps forward is an honor that I value very much.”

He is there for the celebrations as well, often leading christening ceremonies for new tugboats. But mostly, he is just there for the crew members who otherwise may not receive any spiritual support or guidance.

“These men and women on the rivers are on them for half of their lives,” Baldridge says, explaining that a crew serves for 28 days before being relieved by a replacement team. “There’s no chance for regular church attendance, but that doesn’t mean there is an absence of religion here. It’s quite often the opposite. There are guys out here that know their Bibles inside and out, and there are others who live on the edge. I understand and appreciate that.”

Baldridge tells many stories of crew members who ask him simple questions which lead to hour-long conversations of deeply spiritual matters.

“If I posted a sign that says ‘Bible Study at 5:45,’ no one would come, but individually, we can have talks that are mature and honest and about a wide range of topics exploring why faith matters. That’s why I’m here,” he says.

His presence makes a difference to sailors.

“You live in a very closed world when you’re on board,” says U.S. Coast Guard Master Chief Petty Officer Dan Kilkeary of Troy, Ill. “You don’t have access to the resources that you may need, so it’s great to have Chaps with us. He looks out for us and helps us in our personal lives and our spiritual lives. He’s always there, willing to lend a hand.”

Baldridge said that he sees himself as a “waterborne Barnabas”–a reference to one of the Apostle Paul’s traveling companions and encouragers. In this case, one whose task is to teach crew members what it means to be a shipmate.

“A shipmate is a guy who may be hygienically-challenged and tell offensive jokes. He might be someone that you avoid on shore, but he is still someone who deserves your respect and admiration because he’ll do all he can to save you if needed,” he explained. “Jesus spoke in the Book of John of how ‘greater love has no one than this: to lay down one’s life for one’s friends.’ That’s a shipmate.”

Mostly, he said, his role is to just be there and build relationships with mariners.

“I have to let their concerns become my concerns as I get to know them. You have to earn the right to be able to provide a pastoral direction. I have to listen to them in order to become a sort of a visual reminder that God knows that they are here and cared for. I answer biblical questions, do some pastoral counseling and try to make crew members comfortable,” he adds. “I’m here for the ‘Hey-Chaps-you-got-a-minute’ moments. That’s what I’m here for and it’s a joy.”