Bringing faith, compassion to others 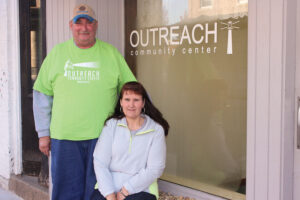 “God literally woke me up and said ‘Feed my ­children.’ ” That was about 20 years ago, and Kenny Mayner knew it was God’s voice. The only thing he did question was what it meant at that time. He and wife, Marsha, have a family of two boys. They were well loved and well fed. What they discovered was the key word, “my.” “We were being asked to feed God’s children,” Marsha says.

Over the years, that phrase has taken on a multitude of meanings for the couple, fueled by a deep faith they have put into action. Initially, Kenny and Marsha, along with other volunteers, travelled to the Appalachian Mountains of Eastern Tennessee, in the wee, dark hours of the night, with a trailer full of food. “It was the day after Thanksgiving,” Marsha recalls. “When we arrived at the food pantry, we saw the one jar of peanut butter, and it broke our hearts.” They also laugh when thinking back to that time. “We discovered that air mattresses don’t hold air when you put them on a cold floor. We all scrunched up on the couch and slept with our feet propped up on a coffee table at that food pantry.” When they left, their hearts were full, and the pantry shelves were stocked. They knew, at least in that moment, they were there to feed others. 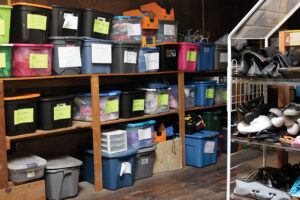 Marsha and Kenny live in Marsha’s hometown of Winchester, also the home of Illinois Rural Electric Cooperative (IREC), where her father worked for many years as a lineman. Marsha is an account support specialist for Prairie Power, Inc., in Springfield, while Kenny works maintenance at the Morgan County Housing Authority in his hometown of Jacksonville.

Through the years, they have continued to follow their faith and God’s call. Between them, they’ve gone on ­mission trips to many U.S. states, as well as internationally. Kenny has been to the Dominican Republic and Marsha to Africa – quite a distance from their hometowns of Winchester and Jacksonville.

While understanding the importance of those trips, and helping around the world, they felt a nudge to help in their own back yard. “The Lord opened our eyes and showed us the need right here at home. We weren’t sure how we were going to make that happen,” Marsha explains. “We didn’t have a space, or the money to buy one, and then ‘coincidentally,’ a building right in the heart of downtown Winchester became available.”

It was too much money and too much space, so they decided it wasn’t what they were supposed to do at that time. Later, someone else also needed space. Together they went to the owner and an agreement was made to split the building. That was doable. They bought it in March 2011.

Today, the Outreach Community Center is housed at 31 South Main St. in downtown Winchester, across the street and a couple doors down from the IREC offices. They have practically outgrown it. “One of these days we will completely outgrow it, and we know that God will provide again,” Marsha says with a smile spreading across her face.

Why they do it

It’s all about the people. You can see it in their eyes when they tell the stories of those who come in. Kenny ­remembers a little girl coming up to him during one of their Back-to-School Bashes and asking how much the hotdogs cost. When he said “free,” she asked for one. His eyes grow a little misty. “She was a petite little girl, and I think she may have come back three times for hotdogs. She was hungry. There are children who are hungry, right in our own communities,” he says. “I don’t want anyone to be hungry.”

During last year’s ice storm just before Christmas, there was a line already forming at the center well before Marsha was off work. “We start the giveaways at 5 p.m., and it is first-come, first-served,” says Marsha. One of the Center’s board members, Brandon Moore, communications super­visor at IREC had a good view out of the co-op’s front window. He called to let Marsha know the line was ­forming at 2 p.m. People were nervous the center would close and they wouldn’t have gifts for their children.

“We wouldn’t do that. People need to be able to come in, but we also don’t open early because that’s not fair to the ones who work. That day, there was a woman,” Marsha pauses, choking a bit on the emotion at the recollection. “There was a Mom who stood out there, in flip-flops, in the ice-storm, for a Friday night toy giveaway to get Christmas gifts for her children. She stood there for three hours waiting. Moms and parents do that! We give used toys to everyone who needs them, and there’s not a limit. But we do expect people to be respectful of others. Each household also receives two tickets per child for new toys. I can’t even tell you how many toys we have given away. The need is high.”

Marsha and Kenny Mayner are grounded in their faith and conviction that people and ­community matter. They believe no one should go without and God will provide. Together, they are doing their part. “We just say that we have always walked by faith. A faith that has been tested, shaken and every time proved. If it truly is God’s plan, it will come to pass no matter what obstacles may seem to be in the way.”

• Since January 2013, they have provided food the last Saturday of each month to about 40 families, serving more than 100 family members

• Breakfast with Santa – a time of fun and fellowship

• The space is available for churches, youth groups or families to use for events