How to save your ash trees 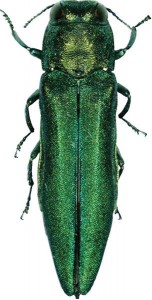 Since 2006, the Emerald Ash Borer (EAB) has spread throughout the state, usually following interstate highways or rail lines, though there have been a few exceptions.

Left on its own devices, the EAB flies about 1-5 miles a year, usually more on the lower end of the scale. With that, it would have taken an average of 300 years for the insect to populate the state.

Sadly, this isn’t the case. The ­creature is a great hitchhiker on firewood and vehicles.

EAB is one of the prettiest ­creatures, but it goes to show that beauty is only skin deep. However, in the insect’s defense, it is what it is. It was imported, most likely to Canada from China on packing material, and found a welcome source of food in the native ashes.

Most of the feeding is on native ash trees such as white, green, blue, black and pumpkin ashes. Mountain ash is not a true ash, but a member of the rose family, so it’s not affected.

Identifying your tree is the first step. There are several trees including walnut, hickory, pecan and box elder that can look like ash to the untrained eye.

And not every problem with the ash is caused by the EAB. While ashes are native, it doesn’t mean they aren’t immune to other insects and some diseases. In other words, EAB causes ash some problems, but not all ash problems are caused by EAB.

While we thought the insect was strictly an ash problem, recent findings indicate the native White Fringetree (Chionanthus virginicus) can harbor the larva. That can also be a problem.

Since the early 2000s, reputable nurseries, garden centers and landscapers have avoided recommending or selling ash trees. We knew even­tually there would be a problem.

Essentially, we have compounded the ­problem by planting lots of ash trees in the last 50 years since Dutch Elm Disease devastated the overplanted American elm. Ashes are native and well-adapted to a wide range of soil types and weather conditions. There are a few disease ­problems, but most are associated with poor care. Some of the selections on the market focused on the male ­seedless forms as well as those with ­outstanding fall color such as the Purple Ash.

The majority of the state is under an Illinois Department of Agriculture quarantine which is supposed to prevent the movement of hardwood firewood from an infected county into a non-infected. The USDA has ­quarantined the entire state ­preventing movement of wood ­products into other states. In both cases, if the firewood or lumber ­products go through a certification process, usually involving heat or chemical treatment, it can be moved.

Many of the southern counties haven’t shown positive for EAB, but most of us think it is present in just about every county. There is just too much movement of vehicles and ­illegal firewood.

If you are in a quarantine area and have an ash tree you consider ­beneficial you may want to treat the tree.

If you look at the tree and think “gosh, it’s not that great looking” you may not want to do anything and take your chances. Many communities are facing the issue of treatment costs ­versus removal costs.

The University of Illinois does NOT recommend ­treating trees unless you are within five miles of a confirmed ­identification. While that’s my ­official ­position, I’d go for ­presence in your county or an adjacent county.

Treatment is best in the spring. DO NOT treat in the fall, as the ­chemicals won’t be absorbed by the tree, and research shows the tree actually will ward off the uptake of the product when applied late in the season.

Unbiased research has shown the best products are either injected into the tree or absorbed by the roots in the spring. The ­websites listed below have the ­latest in ­chemical recommendations.

DO NOT move firewood unless you strip off all the bark and 1/2″ of the sapwood. Most of us won’t do that. If you go camping, check out the campgrounds first; they may have stockpiles of wood.

While it’s usually prudent to say keep the tree healthy, EAB isn’t ­discriminate and will attack healthy and weak trees with equal abandon. However, a healthy tree may not exhibit the symptoms as fast, so keep the tree fertilized, and watered during droughts.

For the latest info, check out the following websites: www.illinoisEAB.com