A matter of taste 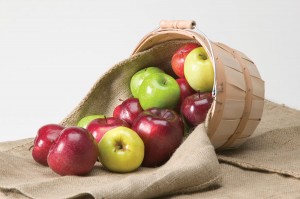 October and apples go hand in hand. Sure, you may find some apples such as Lodi ripening in July and August, depending on the year. And some won’t taste good until they’ve been stored in the refrigerator or cellar over the winter.

It should be mentioned right off the bat that not all apples are created equally.

Granted, a Red Delicious is the beauty queen of the apple world, which is not to denigrate beauty queens in any way, shape or form. With its deep red uniform color, ­perfect upright narrow shape with five bumps on the bloom end, and slight curve to the stem, it’s an ad agency’s dream of an apple.

Unfortunately, there’s nothing there in terms of flavor. It has great moisture content, making it almost perfect for cider; it turns to mush quickly when cooked making it perfect only for applesauce if you don’t mind the bland flavor. On the plus side, its thick somewhat bitter skin makes it impervious to all these negative comments. Truly, beauty is only skin deep.

The good news is there are plenty of apples with great flavor.

Unfortunately, it’s almost next to impossible to find one that does all.

So, you need to figure out what you want the apple to do. Will you be putting it in lunches and salads to be eaten raw? Will you be making pies and cobblers where you want some texture and substance and not mush? Will you be grinding everything up for applesauce?

Occasionally, apples such as Honey Crisp will do all three, though just about any apple can be made into sauce if you run it through a food mill. Honey Crisp, though, isn’t the longest keeping apple. You’ll need to use it by the end of the year, which is one reason you don’t find many after the holidays.

On the other hand, apples such as Arkansas Black and Winesap will keep for months and months, even thru the coming summer if kept cold enough.

The old time Jonathan apple still has much going for it, though newer ­cultivars (Fuji, Gala and their ­relatives) have more flavor.

The point is, figure out what you’re going to use the apple for, and look carefully at the signs at the market to see what apples correspond. And unlike a car, you can buy several ­individual apples and do a taste test. It’s a fun way to get kids involved.

If you do hit a farmer’s market, you may be able to find some of the heirloom types, which always seem to have great taste but lack the ­photogenic aspect. Once they’re in your stomach, though, who cares what they looked like!