Photos and story by Jim Winnerman

The first indication something is approaching is a low hiss and rumble that causes you to stop what you are doing and listen intently to see if it ceases. Instead, it slowly builds in volume, getting so loud the noise becomes an intense guttural shriek echoing across the countryside. Then the sound stops abruptly, only to repeat seconds later in several short bursts.

Even if you had never before heard it in person, something is vaguely familiar. Then it registers. A steamboat is coming around the bend!

That distinct whistle of a paddlewheel riverboat, absent for four years from the Mississippi and Ohio rivers returned to Illinois shores in 2012 as the 418-foot American Queen stopped at the Illinois ports of Chester, Alton and Cave-In-Rock. The same stops are scheduled for 2013.

Last year three months before the Queen arrived at the foot of the tiny village of Cave-In-Rock (pop. 346), nestled alongside the Ohio River in Hardin Country in far southeastern Illinois, Mayor Marty Kaylor got a call from the Great American Steamboat Company advising him the boat would be there in July. “We advertised the arrival in the local paper and on television and radio,” he said. “We thought people would be interested in seeing it. A long time had passed since an actual steam-powered paddlewheel boat had been on the river.”

According to Kaylor, from the time it landed (riverboats “land” instead of docking) at about 7a.m. until the Queen departed at 1p.m., there were people coming down to the river with their families to see it, including a steady stream of people from outside the county.

“The passengers went into the cave, walked all over town, and a few even rode the ferry over to Kentucky and back.” Kaylor says. “For a few hours the number of passengers and crew more than doubled the number of people in town.”

Interestingly the cave, which is 55-feet wide at the entrance and now part of Cave-In-Rock State Park, is known as having been a hideout used by river pirates as early as 1790 when they began stopping boats and robbing them of their cargo. “It was the advent of the steamboat that brought an end to the piracy about 1870,” Kaylor says. “It was just too much boat.”

Wesley Atkinson was waiting on shore to sell passengers pocket knives and bracelets made out of fluorspar, a local mineral. “I had people standing at our table and buying from the time the boat arrived until they left,” he says, adding that it was “sort of overwhelming.”

“The people on that boat are welcome back anytime. They were very interested in the history of the fluorspar in the area mines, and I had lots of fun talking to them all,” Atkinson remembers. “They kept saying they could not believe we were so friendly, but we are just a couple of old country boys just trying to be nice to everyone.”

“When the Queen left, people lined the banks and were up on the bluff. It was just like it must have been in the 1900s,” Kaylor said. “The boat was as tall as the top of the bluff!”

Constructed in 1995 by the Delta Queen Steamboat Company, the American Queen spent several years cruising mid-American rivers before being dry-docked due to financial problems in 2008. Then the Great American Steamboat Company rescued, restored and returned it to the river in May, 2012.

Today the American Queen accommodates 436 passengers, stretches 418 feet, carries a crew of 170, and stops at 34 different ports along the Mississippi, Ohio and Tennessee rivers.

From shore the Queen appears as a floating southern plantation home festooned with porches framed by an abundance of gingerbread trim. There are even porch swings on an outside deck amidst an ocean of white wooden rocking chairs in an area named “the Front Porch of America”.

Inside, gleaming mahogany woodwork, stained-glass table lamps, winding staircases, huge elaborate chandeliers, fine antiques, brass fixtures (including at least one spittoon), and floral wallpaper and carpets all help recreate the opulent Victorian era when “steamboatin’” was regarded as the finest way to travel.

However, hidden beneath the boat’s 1900 appearance are a myriad of modern amenities. The Grand Saloon Theater with several side balconies (modeled after Ford’s Theater in Washington, D.C.) offers nightly entertainment, private verandas are attached to many rooms, and a small swimming pool on the top deck is perfect for hot days. A grandiose restaurant features menus comparable to most blue-water cruise ships and there are several bars. An unlimited buffet of snacks and cold drinks is available 24/7 on the observation deck.

Daily onboard activities begin about 9 a.m. and continue almost hourly until late into the night. However, for many passengers the favorite pastime is sitting in a rocking chair in the front of the boat watching the river slowly appear bend by bend.

Every evening there is some type of “steamboat era” entertainment. One night it may be show tunes from Broadway and the next night a show by a card magician who weaves the lore of riverboat gamblers into his act.

The Juggernaut Jug Band performs on board frequently and, along with their music, includes a history of jug bands on riverboats, which originated about 1900. “One thing we know for certain and that we still practice today,” says band leader Roscoe Goose, “is that the jug must be emptied before it can be played.” 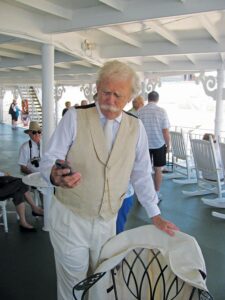 o be a “steamboatman” that originated as he watched the endless parade of boats steaming past his boyhood home of Hannibal.

On a recent trip he mentioned he returned to his hometown of Hannibal, Missouri in 1904 and looked up the girl who was the character from which he fashioned Becky Thatcher in his book Life on the Mississippi. “The only thing I could think when I saw her was how lucky I was to not have married her. Time had not been kind,” he said.

When the Queen lands in Chester, passengers have a surprise waiting at the end of the gangway as they disembark. Sandra Starr, a Chester tourism commission member greets passengers dressed as Olive Oil. “Someone else dresses as Popeye,” she says.

Following the Queen on land are two buses referred to as “steam coaches.” They carry passengers on complimentary tours at each port.

In Chester, the home of Elzie Segar and creator of the Popeye the Sailor Man cartoon character, the buses make a circular route with stops at the Randolph County Museum, the Popeye “character trail” of six statues and the Spinach Can Collectibles Shop and Museum. “All the shops in town open regardless of when the boat stops,” Starr says.

One stop in Chester is Pink’s Sugarland Bakery owned by Dianna Mueller. When the boat first visited in 2012 Mueller thought she was ready with plenty of freshly made fanciful cupcakes and cake “pops,” which are candy-coated cake truffles on a stick. “I had seven dozen cupcakes and they were gone in an instant,” she recalls.

Like Atkinson, Mueller was pleased with the sales, but equally enthusiastic about meeting the passengers. “They were from all over the country and New Zealand, Australia, Canada and Switzerland,” she remembers. She is keeping in touch with several and shipping orders as far away as Washington State.

Starr owns The Stone House Bed and Breakfast overlooking the Mississippi, and says the steamboat whistle signaling the arrival of the Queen is “wonderful” to hear from atop the bluff where her inn and Chester are perched.

“So is the calliope,” she adds. Located on the top deck in the aft of the boat, it is played by a member of the Queen’s small orchestra whenever the Queen departs. The music is made as hot steam escapes through 38 brass whistles of various sizes oozing quick puffs of pure white steam and emitting a shrill sound that can be heard for miles.

Tunes are chosen that are appropriate to the port. In Chester the first song played was, of course, “Popeye the Sailor Man,” followed by “Anchors Away” and “Old Man River.”

As the calliope was played leaving Chester, and a bevy of children and adults were waving from shore, a train passing on tracks next to the boat gave a series of friendly “welcome back” toots, and cars and trucks honked when it passed under the Chester Bridge. All seemed to be saying it was nice to have the Queen back on the river!

Voyages aboard the American Queen range from three to ten nights with fares starting at $995 per person. For more information on all itineraries: GreatAmericanSteamboatCompany.com 1-888-749-5280.

In late summer of 2012 the replica paddlewheel riverboat Queen of the Mississippi was launched by the American Cruise Lines. The boat carries 150 passengers. Different cruises stop at different Illinois ports and include Alton, Grafton, Ottawa and Cave-In-Rock. For more information call 800-814-6880 or visit: americancruiselines.com 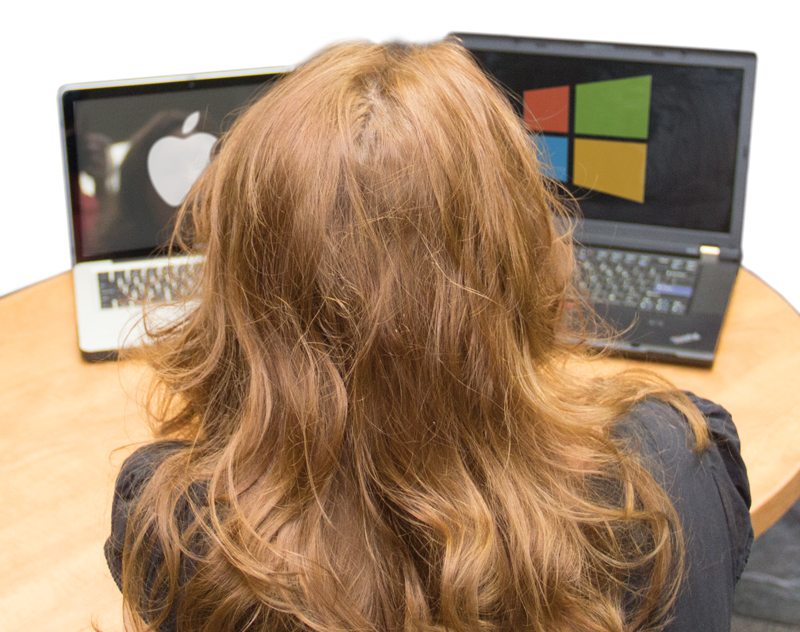 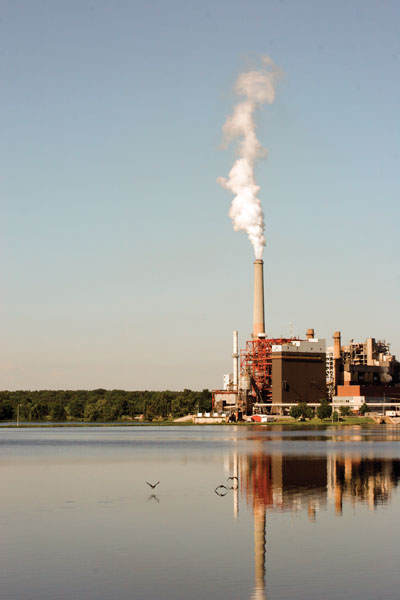