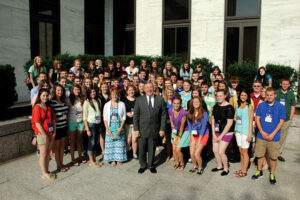 Future leaders representing electric and telephone co-ops from across Illinois met with Senator Dick Durbin on June 20 as part of the 2013 Youth to Washington Tour. They were also honored to meet with Representatives John Shimkus, Rodney Davis, Aaron Schock, Adam Kinzinger, William Enyart and Cheri Bustos.

Sixty-five Illinois students recently returned from the 49th annual “Youth to Washington” Tour, held June 14-21.This event, sponsored by the electric and ­telephone ­cooperatives of Illinois since the late 1950s, is an introduction to our democratic form of government and ­cooperatives for rural youth.

The students met with their Congressional representatives and joined more than 1,520 young leaders from across the country. In addition to the Capitol, they also visited Arlington National Cemetery, the Washington National Cathedral, several Smithsonian Museums, the U.S. Holocaust Memorial Museum, the World War II Memorial, memorials to Presidents Lincoln, Jefferson, Washington and Roosevelt, the National Archives, the Royal Embassy of Saudi Arabia, the Newseum and a number of other historical sites. On the way to Washington, D.C. the students stopped at Gettysburg National Park, which this year is celebrating the 150th anniversary of the Battle of Gettysburg, often described as the turning point in the Civil War.

During the trip, Sarah Locke, from Shelby Electric Cooperative, was chosen by her peers to represent Illinois on the Youth Leadership Council (YLC) of the National Rural Electric Cooperative Association. The YLC is a year-long appointment and Locke will represent all Illinois cooperatives at national and state meetings and events in the year ahead.

To view all the photos from the 2013 Youth to Washington Tour go to http://tinyurl.com/knchwcs

Ask Ed
Working together for Illinois
Grand gardening ideas for August
The attic is still hot
Where there’s smoke … There might just be a festival!
Telling fish stories
Counting your blessings
Home wiring health check