Thank you for telling the EPA what you think 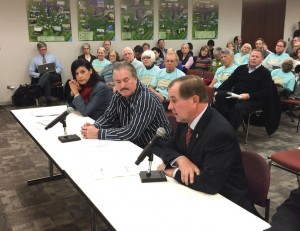 Duane Noland (right) testified a year ago at an EPA ­listening session. Since then 1.2 million co-op members also voiced their concern about the regulations impact on the affordability of electricity.

Thank you. More than 1.2 million comments from electric cooperative members like you, and from across the United States, were submitted to the U.S. Environmental Protection Agency (EPA) in opposition to the agency’s proposed rules that would limit the use of coal, our most abundant and affordable energy source, in both new and existing plants. Dec. 1 was the last day the EPA accepted comments from the public on proposed regulations impacting ­existing power plants.

“The top priority for electric ­cooperatives is keeping electric bills affordable for the ­members,” said Duane Noland, President/CEO of the Association of Illinois Electric Cooperatives. “Unfortunately, the EPA didn’t consider the real world impact this latest ­proposal will have on the budgets of families and businesses across America. We believe it’s ­possible to balance affordability and environmental stewardship, but not under the EPA’s ­latest proposed rules.”

Noland said he doesn’t believe co-op leaders and members are against prudent environmental regulations. “But the EPA received a total of 4.3 million comments on the new and existing plant rules. That means almost 28 percent of all the comments came from co-op members. It tells me that co-op members really got the message and they care about affordability too. The ­comments ­submitted by co-op members highlight the broad ­opposition to this proposal and hopefully will ­encourage the EPA to go back to work with us on common-sense solutions.”