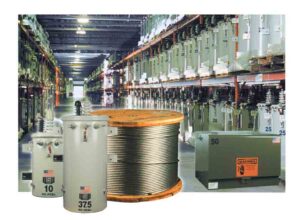 United Utility Supply Cooperative Corporation (UUS) is a name very familiar to those in the electric cooperative industry but one in which you may not be familiar. This cooperative affects you on a daily basis without you even knowing it. UUS supplies electric co-ops with everything from line equipment to hardware and materials for member systems.

Its origins go back to 1948 in rural Kentucky. The Kentucky statewide association began a group purchasing activity to help its co-ops get the best possible price on needed equipment. Group purchasing was so beneficial that the organization expanded by offering a marketing service in adjacent states, as they expressed an interest in participating and taking advantage of the benefits of working together.

As the organization grew it was able to expand its services by offering transformer repair, meter testing and a much-needed glove testing service for its members. In 1960 the Statewide Rural Electric Cooperative Corporation was formed and became the trade name for the materials marketing activities of the statewide association.

December of 1960 saw Statewide RECC reached an agreement with the Ohio statewide association and in 1963 the organization expanded into the state of Illinois. It built a warehouse in Decatur, Ill. and that location continues to operate today. It also expanded into Tennessee, Alabama and Pennsylvania.

Statewide RECC became United Utility Supply Cooperative Corporation in 1974 as a result of a perception on the part of many that if you were doing business with Statewide RECC, you were doing business with the Kentucky Association. The other significant fact of establishing UUS as a separate corporation was the recognition that it should be owned and controlled by its own members and not exclusively by the Kentucky cooperatives.

The organization established a formula, which continues to exist today, which sets the number of directors each state or area receives based upon the volume of business it does with United Utility Supply. This change has proven over the years to be a milestone in the development and expansion of the organization.

Today, United Utility Supply represents, in addition to its own line of distribution transformers, over 100 manufacturers of materials that are used by its utility customers across its 20-state service area.

In celebrating the International Year of the Cooperative, we want to show our support for the cooperative model. Please join us each month as we continue to feature a different cooperative that you may recognize or might also be a member.