The bounty of the prairie 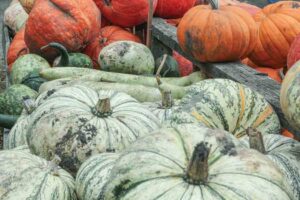 Consumers are increasingly aware of the value of feeding their families fresh, locally-grown fruits and vegetables and are searching for farmers markets and produce stands.

Illinois has long been known for its corn and beans, but more than 40 different specialty crops are grown in the state, including everything from pumpkins and apples to horseradish, grapes and popcorn, on more than 100,000 acres of farmland each year. In 2010, specialty crops generated more than $400 million in sales. According to the Illinois Department of Agriculture (IDOA), “produce travels an average of 1,500 miles to the grocery store where it is sold. When spent locally, $.32 more of every dollar stays in the community.”

Savvy consumers know that buying locally helps the economy and gives them access to fresher products. Many restaurants are looking for locally-grown produce and are designing menus that offer seasonal selections. 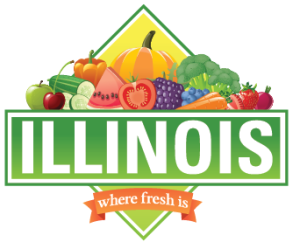 In order to increase consumer awareness the IDOA, in cooperation with the Illinois Specialty Growers Association, has launched the “Where Fresh Is” marketing program “to help identify Illinois-grown produce at local grocery stores, farmers’ markets and roadside stands throughout Illinois.” The campaign logo can be used by Illinois producers, who have signed up to participate in the program, as a tool to promote Illinois-grown products.

As the demand for fresh produce increases, so does the need for “growing” more producers. The average age of vegetable growers is 55 and fruit growers average 58 years. Recognizing this need, the University of Illinois launched the Beginning Farmer and Rancher Program for aspiring farmers, new growers and commodity farmers interested in diversifying into fruit and vegetable production. The goal is to increase the number of farmers to help meet the increasing demand for produce and contribute to local economies.

The Saturday program is offered in three locations in Illinois: St. Charles, Urbana and Dixon Mounds. For more information go to www.newillinoisfarmers.org.

Will you take the challenge?

“Buy Illinois” challenges every household to dedicate $10 of their weekly grocery budget to the purchase of Illinois Products. It estimates if every Illinois household were to take the challenge it would generate $2.4 billion annually. Just look for the Illinois Products logo at your local grocery store, restaurant, winery, agribusiness or retailer.

“From Dirt to Dessert” 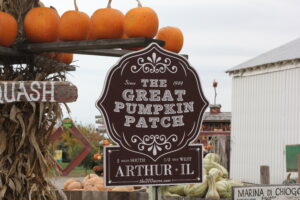 “From dirt to dessert” is a phrase coined by Mac Condill of The Great Pumpkin Patch in Arthur, when talking about his favorite topic – cucurbits, the plant family that includes pumpkins, squash, gourds, cucumbers, melons and more.

Little did Mary Beth Condill, Mac’s mother, know when she first planted a few pumpkin seeds in her children’s garden in 1977 that approximately 50,000 people would annually visit her farm. 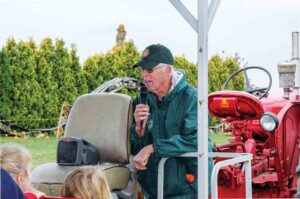 It all started with a desire to grow pumpkins for jack-o-lanterns. The extras were sold out by the road with an envelope on the milk house so people could pay for them on the honor system. The operation rapidly expanded into something neither Mary Beth, nor her husband Bruce (pictured right), could have foreseen. The Great Pumpkin Patch opened to the public in 1989 and was overrun with people. “People were pulling in and parking everywhere,” Bruce explained. “Mary Beth said ‘we’ve created a monster.’ We still have that monster!”

Mary Beth’s great grandfather Frank McDonald and his family moved from Virginia to Illinois in 1859 and homesteaded the land the farm sits on today. In addition to the row crops and grains, the three acres of pumpkins 15 years ago has grown to 63 acres of pumpkins, squash and gourds, including more than 300 varieties from 30 countries around the world. No one else in the world is growing that many varieties in one place. 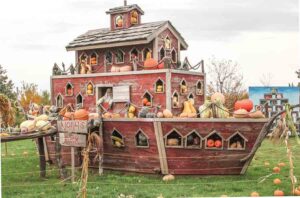 pumpkin comes from Illinois. The Condill’s ship pumpkins to the Libby plant in Morton and buy back a small amount of it processed to use in the various goods available at its bakery.

The Great Pumpkin Patch is a family-run operation which has expanded to include The Homestead Bakery, open April to December, and Homestead Seeds, the brainchild of Mac. Bruce and Mary Beth are still very involved, but son Mac has assumed the duties as general manager while his wife, his brothers and their spouses are all involved in the business from retail to signage to social media and the website. During the season, which runs from Sept. 15 thru Oct. 31, an additional 80-90 employees are required to keep things running smoothly. 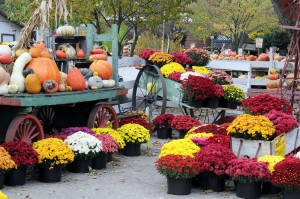 Fall colors abound at the farm with its multi-colored towers of pumpkins and squash and pots of burgundy, orange and yellow mums everywhere. One deep breath as you step into the bakery takes you back to grandma’s kitchen with its sweet scents of cinnamon and yeast breads. It’s obvious the farm is a work of love.

It doesn’t take much time listening to Mac to realize how passionate he is about cucurbits. Educationally- minded, he enjoys talking about heirlooms to groups including master gardeners, high school students, and university classes in biology/botany and communications. 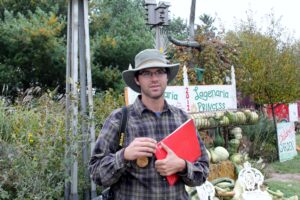 According to Mac, cucurbits are an underappreciated, underutilized plant family that people don’t understand. “For human consumption over the span of time, there are only two plant families that are more important – grass, which includes corn, rice, barley and grain; and beans. And then cucurbits, and those three have made up the three Sisters in Native American society for hundreds of years.”

“We aren’t looking to the future to create new things, we look backward. People have been raising and eating these things that are culturally, historically and nutritionally significant, and yet much focus now is on decorating, and we have forgotten these things are edible! So that’s part of our mission. We donated four and a half tons of produce to the food banks in downstate Illinois last year but they weren’t quite sure what to do with it. This year we are showing them how to prepare it, so they in turn can show others.”

During the season, the farm is open seven days a week with weekend events such as Native American encampments, re-enactments of colonial living, squash tasting, rack wagon rides and gourd carving. Check out its website at www.the200acres.com for more information.

Do it well, they will come 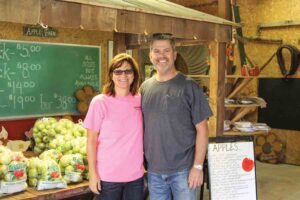 Third generation apple growers, Jeff and Lisa Broom of Broom Orchard in Carlinville, Ill.
live by the motto, “What we do, we need to do well,” and it shows in every aspect of their business.

The 128 acres hold approximately 70 acres of apples, 20-25 of peaches, five to seven of pumpkins and two acres of strawberries. They also raise small amounts of plums, pears, nectarines and blackberries. 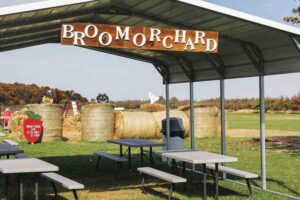 Jeff and Lisa have geared the orchard toward a family atmosphere and agritourism. They found the wholesale market to be so competitive that it really requires a large operation to compete. Jeff explained, “You either need to be able to produce 100 thousand boxes to be able to make a little off of it, or go the other way and sell everything out the front door and create an atmosphere where people want to come spend a day.”

They are the only full-time employees but hire extra help during festival season or when making cider or picking and sorting apples. 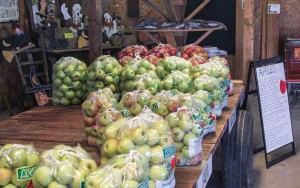 The first apples are typically ready around July 4, and they try to keep a summer apple available while customers are there for peach season. The Brooms know there is nothing quite like a crisp, juicy apple and they make every effort to ensure that’s what their customers get.

According to Lisa, “There is a trend going in the direction of more specialty apples like the Ginger Golds and the Honey Crisp. But, our most popular are still the old stand-bys like the Jonathan – you can’t beat it for apple pie or apple sauce. I’ve tried them all but it is the best!”

The apple business wraps up in late October or early November when Jeff starts pruning the trees, which is the biggest job of all. “You have to go over each tree and prune and shape it. It takes a lot of time to prune 8,000 trees,” said Jeff. “It’s not a business you just decide to jump into. You plant trees, and it takes six to seven years down the road before you get any return on your investment.”

Broom Orchard has a website, www.broomorchard.com, and a Facebook page which Lisa tries to keep updated with what is happening at the orchard along with dates various crops are expected to be ready.

So whether looking to “pick your own” or just take a day trip, keep them in mind.

If you’re not familiar with it, one whiff of this pungent root is sure to clear up the sinuses!

German immigrants first brought horseradish to the Midwest in the mid-1850s and by the 1890s the business was thriving. Cold winters and warm summers make for excellent growing conditions. It is a labor- intensive crop which must be planted by hand, but today most horseradish is harvested with potato diggers which have been converted to undercut, lift and shake dirt from the roots.

Generations of farmers have passed on their methods for growing the root but the number of farms is dwindling. There are currently less than 12 farms and approximately 1,500 and 2,000 acres producing approximately 7,000 pounds to the acre. The farms also grow other crops, such as corn or beans, but the horseradish crop is a significant part of their operations.

J.R. Kelly Company, located in Collinsville, is the nation’s top supplier of horseradish and brokers 10 to 12 million pounds annually, both domestically and internationally. This distinction has earned it the nickname “The Horseradish House.” The company stores the roots in cooler warehouses and ships them to large processors as well as individuals.

Prepared horseradish is located in the refrigerated cases of grocery stores and can be found in a variety of products from mayonnaise to mustard to cocktail sauce.

For recipes using all of the specialty crops featured, check out Finest Cooking. 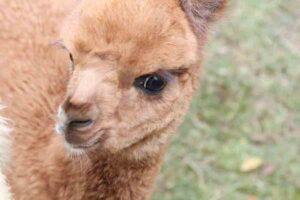 The Houchin family lived in Bloomington with dreams of building a new home in the country. On a home schooling field trip, Karley took her four children to visit an alpaca farm and the kids thought having alpacas in the country would be a great idea.

Curious, their father Brian started researching the business side of raising alpacas to see if there was a way to earn an income from them rather than just having a hobby with a few as pets. He found that alpacas are relatively easy to raise; don’t eat as much as other livestock, are a good fit for small acreage and very docile and friendly, which would make it safe for the kids to provide their care. But that still didn’t solve the problem of living in the country. 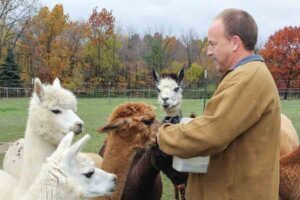 As it turned out, the owner of the original farm Karley and the kids had visited, just outside Heyworth, was considering selling her farm and the family ended up buying it and the 12 alpacas too.

The farm is truly a family affair. Their children handle the daily care of the animals along with giving them lots of love and attention. The family has immersed themselves in the industry and enjoys teaching others all about their furry residents.

Income is generated through the sale of fiber and the breeding stock. Their current herd numbers 18. In late spring the alpaca are sheared of their fleece, a majority of which is sold to a national fiber co-op. The Houchins have also sold fleece at a fiber auction and this fall they held back some to have carded and spun into yarn. Alpaca fiber is extremely soft and doesn’t contain lanolin so it is hypo-allergenic. They plan to have the yarn made into products such as socks, scarves and stuffed animals for resale.

“We’ve seen an increase in people wanting to buy items from animals,” said Brian. “Especially knowing it came from an animal on this particular farm.” To learn more about the Houchin Alpaca Farm visit www.houchinfamilyalpacas.com.