After maintaining a steady pace for a century, lighting technology has begun to leap forward, fueled by tightening energy efficiency standards and hefty incentives for ­manufacturers. And despite a bit of price shock on some lighting ­products, co-op members-especially large commercial and industrial accounts-are working with their local, not-for-profit, consumer-owned power providers to see if emerging lighting options can curb rising costs. 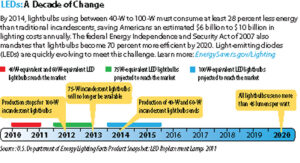 Congress first enacted improved energy efficiency standards for incandescent bulbs under the federal Energy Independence and Security Act of 2007. But when new lightbulb rules began to take effect in 2012, they were met with confusion.

Under the law, by 2014, lightbulbs using between 40-W to 100-W must consume at least 28 percent less energy than traditional ­incandescents, which will save Americans an ­estimated $6 billion to $10 billion in lighting costs annually. The measure also mandates that lightbulbs become 70 percent more efficient by 2020.

In June of this year, the U.S. House passed an amendment to stop ­enforcement of these ­standards, mirroring a funding freeze for ­enforcement efforts adopted in late 2011. Yet even if the ­provision becomes law, very little will change. Congress has not repealed or adjusted existing lightbulb efficiency standards or changed the timeline for ­implementation. Major lighting manufacturers like General Electric, Philips, and Osram Sylvania continue working to comply with the 2007 law.

Incandescent bulbs create light using a thin wire (filament) inside a glass bulb-a delicate connection that can easily be broken, as frustrated homeowners can attest. In contrast, LEDs are at the forefront of solid-state lighting-small, packed electronic chip devices. Two conductive ­materials are placed together on a chip (a diode). Electricity passes through the diode, releasing energy in the form of light.

Invented in 1960 by General Electric, the first LEDs were red-the color depends on materials placed on the diode. Yellow, green, and orange LEDs were created in the 1970s and the recipe for the color blue-the foundation for white LEDs-was unlocked in the mid-1990s. Originally used in remote controls, exit signs, digital watches, alarm clocks, and car signal lights, LEDs quickly gained momentum for large-scale lighting.

By 2030, the U.S. Department of Energy estimates solid-state ­lighting technologies could reduce the amount of electricity used for lighting ­(currently 13.6 percent of the nation’s total) by half, saving up to $30 billion a year in energy costs.

Electric cooperatives are supporting LED study through the Cooperative Research Network (CRN), an arm of the Arlington, Va.-based National Rural Electric Cooperative Association. Recently, CRN worked with Western Farmers Electric Cooperative, a generation and transmission cooperative based in Anadarko, Okla., and the Oklahoma State University Animal Science Department to evaluate LEDs at a farrowing operation and a dairy farm in the Sooner State. The project ­measured the effectiveness of LEDs in harsh environments and looked for any influence on animal behavior.

T-Bar M Dairy Ranch, outside of Durant, Okla., normally uses 250-W metal halide lights in its barns. CRN exchanged those bulbs in 10 fixtures with 120-W LEDs. After six months, the dairy had cut energy use by 55 percent and boosted brightness by 30 percent.

“Utility costs go up every year-that’s reality,” explains Tami Tollenaar, who manages the dairy. “To move forward in your business, you have to look for ways to be more efficient. LEDs are one of the things we can do to help us move forward.”

“Lighting for a swine facility is pretty important,” explains owner Rich Robinson. “We try to convince the sows it’s spring year-round to improve their eating habits.”

CRN switched 25 fixtures from 26-W CFLs to 15-W LEDs. After six months, Robinson slashed his energy use by 54 percent.

“I was worried because normally when you see an LED it doesn’t seem to put out as much light as a 150-watt incandescent bulb-it’s a different type of light,” Robinson admits. “But, after installing the lights, I was surprised at how well they lit up the area. I think the LEDs actually outperformed the CFLs.”

“The initial cost of LEDs is sig­nificantly higher than conventional lighting,” notes Scott Williams, Western Farmers Electric commercial & industrial marketing manager. “Like all modern technology, you can expect the price to come down as the product develops. However, when you consider all the factors over the life cycle of a light, LEDs have already proved they save money.”

Curious to know if LEDs are right for you? Homeowners can visit

www.energysavers.gov/lighting to compare LEDs to new energy-efficient incandescent bulbs and CFLs. The Touchstone Energy® Cooperatives free app, “Save Energy, Save Money” for iPhone, iPad, and Android devices, includes a ­lighting calculator showing the potential ­savings from replacing incandescent lamps with either CFLs

or LEDs; learn more at www.togetherwesave.com/Energy-Saving-App-Smartphones. For more in-depth information about LEDs and other types of solid-state lighting, visit www.eere.energy.gov/buildings/ssl.